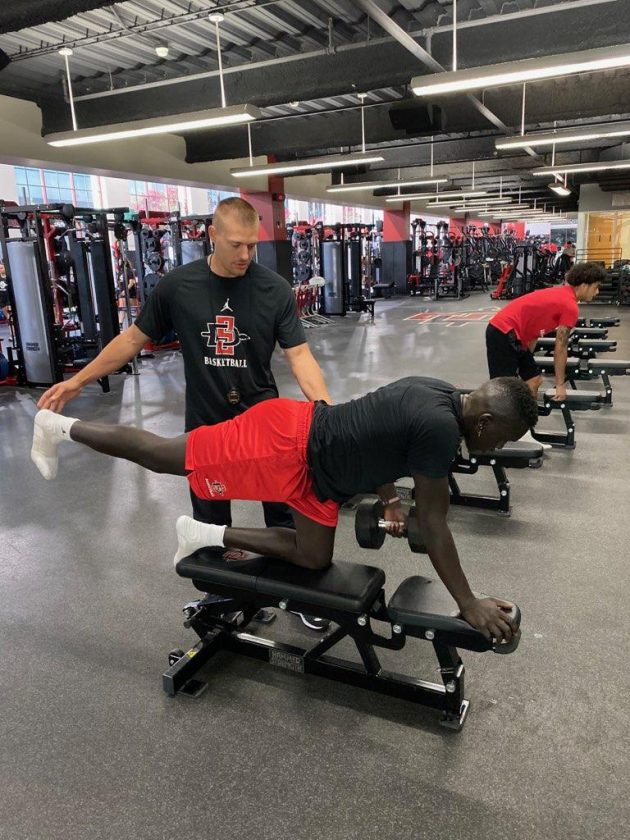 SAN DIEGO — The biggest offseason basketball news this past summer centered around where NBA superstar Kawhi Leonard would sign after leading the Toronto Raptors to the title.

Leonard’s decision was to return to California and join the Los Angeles Clippers, a move that ultimately led to Andrew Mitchell becoming a member of the San Diego State University athletic staff.

Mitchell, a 2006 graduate of Fort Dodge Senior High, was recently appointed as the strength and conditioning coach for the Aztec men’s and women’s basketball teams.

“When Kawhi signed with the Clippers, he decided to bring his strength and conditioning coach at San Diego State up to be his personal coach,” Mitchell said. “That shifted pieces around and I ended up here. It’s crazy to think about.”

Mitchell had spent the past four-plus seasons working as the associate director of strength and conditioning at UC Irvine, a school located just 80 some miles from the campus of San Diego State.

While at UC Irvine, Mitchell helped the basketball program find great success, including three Big West Conference championships, two conference tournament titles and a school-record 31 victories that year including a win over Kansas in the NCAA Tournament.

“UCI was a great job and we had great success under Coach (Russell) Turner,” Mitchell said. “Honestly, when I took the position, I viewed it as joining Coach Turner’s staff and following him to a bigger job in a few years. Instead, it ended up having a major impact on me.

“I can’t give enough credit to Coach Turner for what he taught me. He demanded a lot out of everyone and through his daily drive and fight for excellence, he made you into a better person.”

For Mitchell, who would spent a season on the campus of Iowa Central before eventually joining both the Iowa State football and basketball programs during his college years, the time spent with Turner was similar to his experiences as a Triton.

“What really helped shape me was the culture that Coach Dennis Pilcher and Coach Chad Helle had at Iowa Central,” Mitchell said. “I didn’t even realize what they were ingraining in me at the time and I’ve told them both that whenever I’ve seen them. The standard, demeanor and expectations that they set are just super intense and that is exactly what we had at UCI.

“Some of those lessons (at Iowa Central), I didn’t appreciate. But when I think back to them, they were right. That’s something you wouldn’t expect from a little JUCO in Fort Dodge.”

Mitchell also reflected back on the importance his mother, St. Edmond principal Linda Mitchell, played in his upbringing.

“Her relentless pursuit of service is an incredible example that she has provided for me,” he said. “I don’t think I tell her that enough or thank her enough because she is my mom and that’s just what she does.”

Prior to joining UC Irvine’s staff, Mitchell was at the United State Olympic Training Center and also spent time at Drake University. He was an intern at both TCU and Iowa State.

“I am extremely happy to be at San Diego State,” Mitchell said. “It is a great opportunity for me and it feels good to see that hard work pays off.”

Mitchell, who was a letterwinner on the Iowa State football team and basketball team, graduated from the school in 2011. He earned his master’s degree from Drake in 2014 and is certified with the Collegiate Strength and Conditioning Coaches Association.