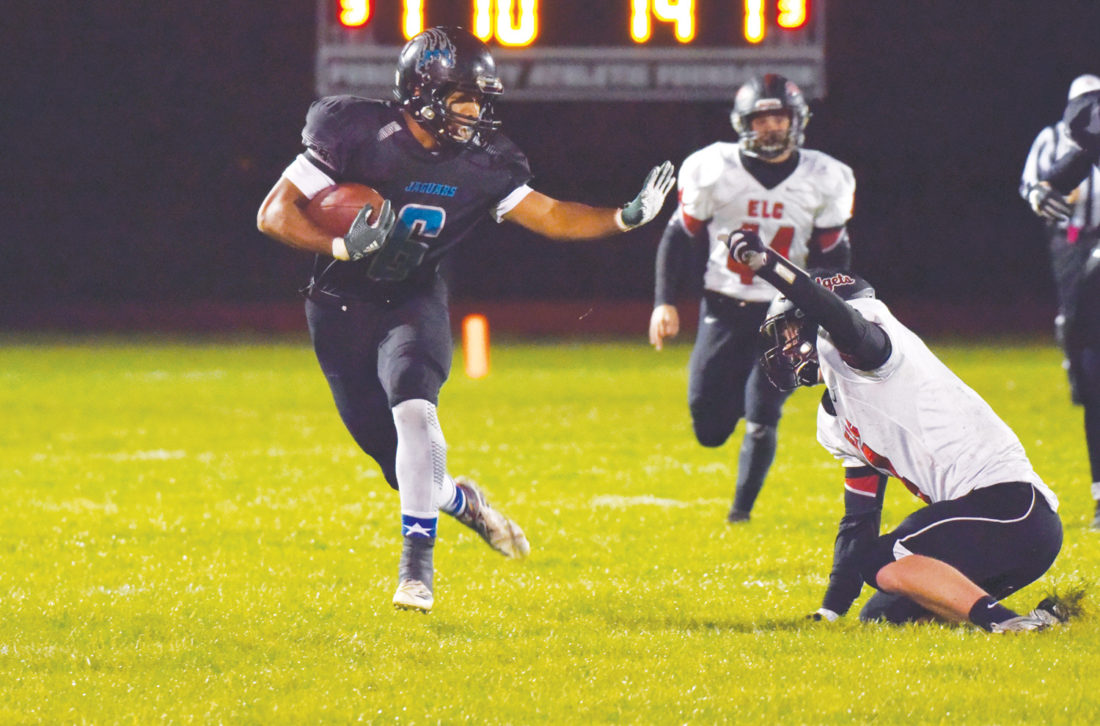 GOWRIE –Two of the most prolific offenses in Class 2A will meet in a winner-take-all scenario here on Friday.

“Our schedule has lined up nice for us, with four district games being at home,” said Southeast Valley head coach Mike Swieter. “We defintely have an advantage at home, being comfortable and in front of our fans.

“We have a great opportunity. If we win we’re in, but if we lose, there are a couple of scenarios where we don’t get in, so we have to go out there and take care of what we can control.”

The Jaguars are looking to return to the playoffs for the first time since 2016 and second overall (2014 was the other appearance) as a consolidated program.

For Algona, their last trip was in 2015. The Bulldogs have been in the postseason six times.

“We know what to expect, so we can’t overlook anything,” said Algona head coach Andy Jacobson. “We talk each day about getting better and taking one day — one play, one game — at a time.”

It was a rough start for the Jaguars, opening the season 2-2.

After giving up 35 points in the third quarter to fourth-ranked South Central Calhoun — it was a turning point for the Jaguars.

“Basically we had a sit down, heart-to-heart and told everyone they had to step up,” Swieter said. “If we didn’t start doing something, our season would be done and we wouldn’t be able to accomplish what we wanted.”

Southeast Valley reeled off four straight victories, including a 48-41 win over then ranked No. 2 Spirit Lake. The Jaguars have the seventh best RPI in 2A, after losing to Top-5 teams and beating one Top-5. Southeast Valley’s opponents have a record of 43-29.

The Jaguars are riding high behind Kyler Fisher, who is second in 2A in rushing with 1,370 yards and is the leader in rushing touchdowns with 21. He leads 2A in scoring with 170 points. He has two receiving touchdowns, three return scores and 14 seven two-point conversions.

Since losing to the Titans, Fisher has rushed for 826 yards and 11 scores.

For his career he has 2,247 yards on 322 carries and 31 touchdowns, which are both school records. He also has the single-game rushing record with 270 yards.

Nyles Johnson (517 yards) and Chase Swieter (361) are his main targets. They have five and six touchdowns respectively.

When the Jaguars hit the field, Swieter knows they have to be able to play their game.

“We have to control the tempo of the game and eliminate mistakes,” Swieter said. “Winning the turnover battle is huge. If we give up points and get behind big, there is no way to catch this team.”

Algona’s closest contest of the season, was last week when they defeated eighth-ranked Spirit Lake (30-24).

The Bulldogs have outscored their opponents 353-163 and have won each contest by a an average of 21 points.

“They have no weakness,” Swieter said. “They can hit with the run and hit with the pass. There is a reason they’re 8-0.

“This is a great opportunity for us.”

Grein’s main targets have been Wyatt Wegener (624 yards) and Skyler Groen (546). They have eight and 10 touchdowns with 24 and 23 catches respectively.

Jacob Durant is the groundhog for the Bulldogs, carrying the ball 128 times for 987 yards and 10 touchdowns. Wegener (510) and Groen (468) are also big threats with nine and six touchdowns respectively.

“We have to control our attiude and our efficency,” Jacobson said. “They (Southeast Valley) are a very good team that can run and throw the ball.”