Webster County has entered triple-digits with its total of COVID-19 cases, passing 100 on Tuesday. Webster County Public Health confirmed 100 cases. The Iowa Department of Public health has tallied 101, as of Tuesday at 3 p.m. Of those, 75 have recovered. The cases fall into the following ...

The Blanden Memorial Art Museum, 920 Third Ave. S., is temporarily changing its hours for visitors during COVID-19. The museum will be closed Sunday through Tuesday. Hours will be 1 to 4 p.m. Wednesdays through Saturdays until further notice. For more information, visit www.blanden.org.

Traffic to be restricted on Veterans Bridge

Veterans Bridge on First Avenue South will be limited to one lane of traffic today and Wednesday, according to the Fort Dodge city engineering staff. Flaggers will be present to direct traffic to alternate using the one open lane of the bridge. The bridge will be closed to pedestrians.

Part of Charles Street to be closed for storm sewer work

The 400 block of Charles Street will be closed beginning at 7 a,m. Tuesday, according to the Fort Dodge Public Works Department. Crews will be repairing a damaged storm sewer. When the work is done, the trench will be filled, but the asphalt won’t be replaced until late June or early July.

Fort Dodge police are working to identify suspects after a man in the 300 block of Avenue M West claimed he was assaulted and robbed Thursday morning. Officers were dispatched to Avenue M West around 10:15 a.m. to respond to the report at Westridge Townhomes. “It was evident that the male ...

STANHOPE— Charges have been filed in a Dec. 28, 2019, incident in which Jacob Elliott, 19, was shot during an attempted robbery. Police Chief Steve Butler of the Ellsworth/Jewell/Stanhope Police Department said that Olnario Rodriguez-Ruffridge, 17, has been charged with attempted murder, a ...

Webster County Supervisors accepted two retirements Tuesday. Steve “Wally” Elifrits, Webster County Jail administrator, will retire effective June 30 after 16 recent years of service. Elifrits served at the jail before working in the prison system. He returned to the jail in 2004. “I ...

The Holy Trinity Food Pantry is open from 10 a.m. to 3 p.m. on Wednesdays at the Corpus Christi Parish Center, 403 N. Eighth St. The pantry serves all denominations, anyone in need.

This year’s Blues Under the Trees canceled

The annual Blues Under the Trees concert, originally scheduled for July 25, has been canceled due to COVID-19 concerns, according to a release from the Lizard Creek Blues Society. “While we hung on as long as we could, the tough choice was made,” the release said. “We are looking ...

A portion of U.S. Highway 20 that spans part of Webster and Hamilton counties will be closed from 7 a.m. to 7 p.m. on Thursday for emergency repairs, according to the Iowa Department of Transportation. The closure will affect the portion of the road between Webster County Road P73 and Exit ...

Starting Monday, the Wright County Courthouse will be open by appointment only during normal business hours. County offices not accessible in person will continue to conduct business through email, mail and by telephone. Contact information for all county offices can be found at ...

FDCSD Board announces intent to fill vacancy by appointment

The Dodger Area Rapid Transit (DART) and the Regional Transit Authority (RTA) systems will resume service June 10, the MIDAS Council of Governments announced Thursday. DART services will resume their fixed routes and Jefferson Lines shuttles, as well as paratransit services and the Prestage ... 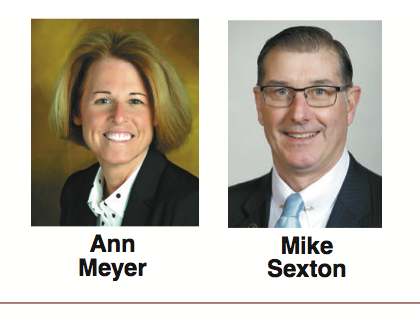 Republican state representatives Ann Meyer, of Fort Dodge, and Mike Sexton, of Rockwell City, sailed through Tueday’s primary election, securing their party’s nominations with no opposition. They also have no opposition in the November general election. Meyer represents House District ...