Simmons offers service to extend the life of tools

-Messenger photo by Chad Thompson
Tim Simmons, owner of Simmons Sharpening Service, shows the edge of a bacon slicer at his shop. Simmons said he can sharpen anything that has a sharp edge on it. 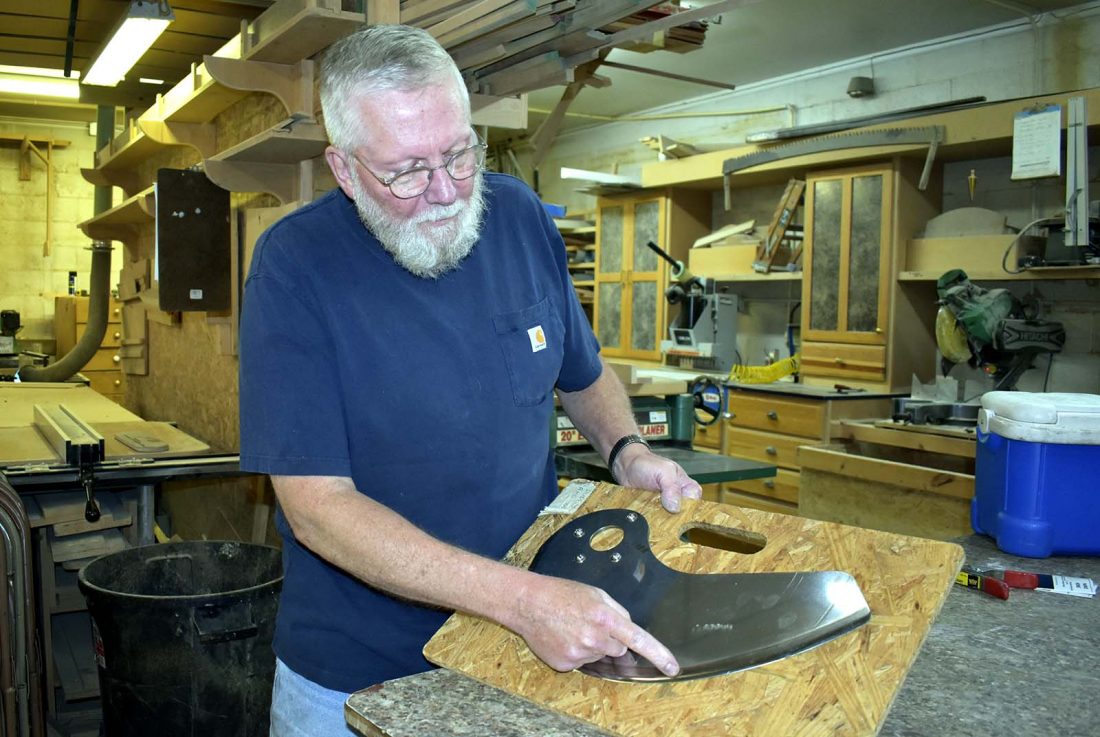 -Messenger photo by Chad Thompson
Tim Simmons, owner of Simmons Sharpening Service, shows the edge of a bacon slicer at his shop. Simmons said he can sharpen anything that has a sharp edge on it.

Tim Simmons has been working with some form of a tool almost his entire life — whether that was as a woodworker, mechanic or machinist.

And inevitably the tools he used would wear down and need sharpened.

For a long time, Simmons had a guy he could call for his sharpening needs. Until one day there wasn’t.

“Back in 1994, I quit my job at Silgan (Containers) and went into woodworking and home remodeling and of course with that, you have a lot of tools that need sharpened,” Simmons said. “The guy doing my stuff was a guy with a little shop in his basement. Well, he died.”

Simmons said he had offered to buy the man’s shop at one point, but was never able to come to an agreement. 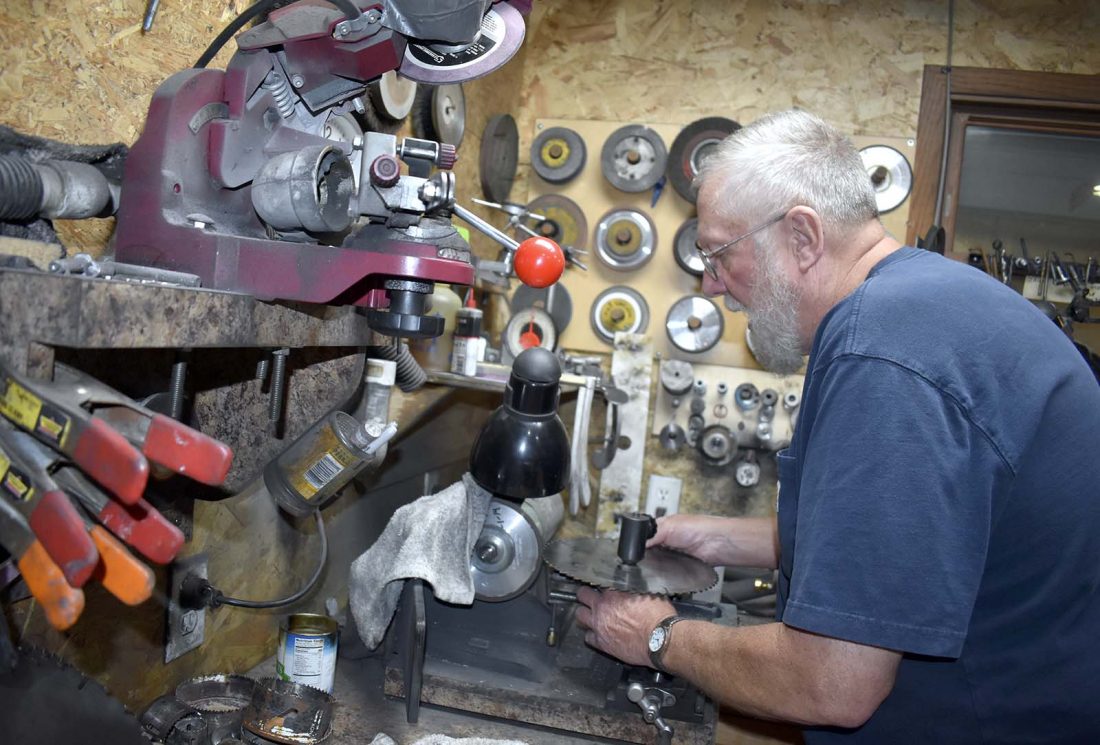 “I had offered to buy his shop and he would not sell it to me,” Simmons said.

Simmons found that there were other places around the state that sharpened tools, but the cost of sending freight both ways got to be expensive.

That’s when Simmons took it upon himself to start his own sharpening service.

“It happened by necessity,” Simmons said.

And in November of 2009, Simmons bought his first sharpening machine.

Soon after, Simmons Sharpening Service was born. He started that venture in addition to his home repair and remodel business, Tim Simmons Enterprises LLC, which has been around since 1991.

“I do a lot of work for retailers. I would install flooring, do a lot of ceramic tile,” he said. “Over the years, I put together a woodworking shop where I can make anything you want out of wood.”

Since 2000, his shop has been located at 125 S. Fourth St. And there he performs woodworking and sharpening services.

In more recent times, Simmons added to the sharpening side of his business.

He now has about 29 different sharpening tools in his arsenal.

“I had 17 years experience as a machinist, so I decided to start buying equipment to sharpen my own stuff,” Simmons said, recalling how the business started. “I started out small, one machine here, one machine there. Word got out that, ‘hey, Tim can sharpen saw blades.'”

In addition to saw blades, Simmons sharpens woodworking equipment, meat processing tools, metal working tools, printing equipment and just about anything else with a sharp edge.

“It has grown into a nice little business,” Simmons said. “I do scissors, kitchen knives, rotary blades for quilters.”

“Anything that has a sharp edge on it, I can sharpen it,” he added. “Both steel and carbite.”

The most unusual item he’s sharpened?

“That would be a bacon slicer,” Simmons said.

The sheer size of it is an eye-catcher.

“The blade is quite substantial,” Simmons said. “That’s one of the most unusual things I’ve ever sharpened and it takes a while to do it. The blade itself is over $2,000 new, and I sharpen it for a fraction of that cost.”

Simmons, a native of Boone, does all of the work himself.

“Over the years I have had as many as three guys working for me,” Simmons said. “They have since moved on of their own volition. Over the years I think I’ve only fired two guys. The rest of them just move on. Sometimes they don’t even tell me why they are leaving. Maybe it’s me, I don’t know.”

Simmons said it’s been kind of surprising that in the last four years, not one person has even come in and applied for for a job. Although he admits part of that is because he hasn’t actively pursued help.

Simmons said he’s usually in the shop until about 6 or 7 p.m.

He will take on between 15 to 20 sharpening jobs in a week, depending on what gets brought in.

“I do both walk in and commercial,” Simmons said. “Commercial brings stuff every few weeks.”

He said multiple restaurants will drop their knives off for sharpening.

“I had a restaurant recently that brought me 14 knives and they wouldn’t cut anything,” Simmons said. “I went through all of them — redid the profile, sharpened them up and he (restaurant owner) said, ‘every two to three weeks, I’ll be bringing you my knives. He said it’s so much easier to cut produce with these knives.”

In terms of remodeling projects, Simmons’ work is on display in various spots throughout Fort Dodge.

Perhaps one of his most recognizable projects can be seen inside the Decker Truck Line offices where he did all of the marble and tile work.

He also completed the tile work at the KFC Taco Bell.

Simmons started to do remodeling work while he was still working at Silgan in the 1980s. At that time the name of the company was Carnation Can.

“One day someone said, ‘hey, can you build me this cabinet and I said, ‘yeah.'”

In recent years, Simmons has scaled back on some of the bigger projects.

“I am getting older and I don’t have a lot of help,” he said. “I do a lot of kitchens and bathrooms. That’s pretty much where I live.”

Creating something useful or solving a problem are skills that Simmons has possessed since he was a child.

“Woodworking has always been in my blood,” Simmons said. “My dad was a carpenter and he had worked for my uncle who was a home builder. My uncle had a wood shop. I developed a passion for working with wood ever since I was 10 or 11 years old.”

In high school, Simmons took every hands-on class available to him.

“I knew I was not going to go to college,” Simmons said. “I was the oldest of five kids. We had some vocational programs in high school for three hours. I took all three in high school. I have been a mechanic, a machinist, and now a wood worker — school paid off for me.”

After graduating high school in 1974, Simmons became an auto mechanic.

“If someone told me when I was younger that I would move 50 miles away from home and start my own business, I would say they were nuts,” Simmons said. “I was working in a machine shop (in Boone), just got tired of the job, put out some resumes and got hired up here (Silgan, Fort Dodge) in ’87. Fort Dodge has been good to me.”

Simmons said the number of sharpening shops has decreased significantly.

“With today being a throw away society, everything is made to be disposable,” Simmons said. “Sharpening shops are kind of a dying industry. It used to be 30 or 40 years ago, there were two or three shops in every town.”

“I like to recycle stuff,” he said. “I can save you 70 percent on the cost of a saw blade in sharpening one. You can buy a new one for $40 or sharpen it for $12. Do the math and it comes out pretty good in your favor.”

Simmons was off work for a while after undergoing rotator cuff surgery in July.

But he’s eager to increase his sharpening business.

In fact, he said that’s his biggest challenge.

“Not having enough of it (business),” he said. “I am offering a service everybody needs. Everybody has a kitchen knife or scissors or a lawn mower blade that’s dull. Yet people will take it off and buy it new. I can make it cut better than new, most generally, and yet they will throw it away. I am trying to get people away from that throw away mentality. Let’s fix it up.”

Simmons said the work he does is satisfying. 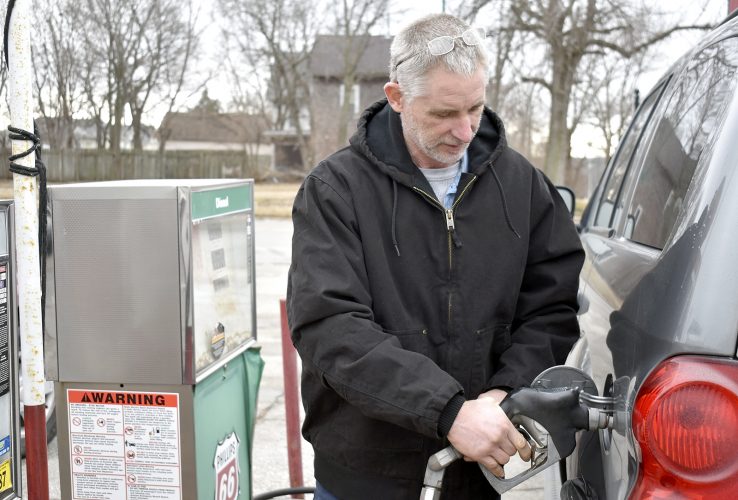