‘Agriculture is in my blood’ 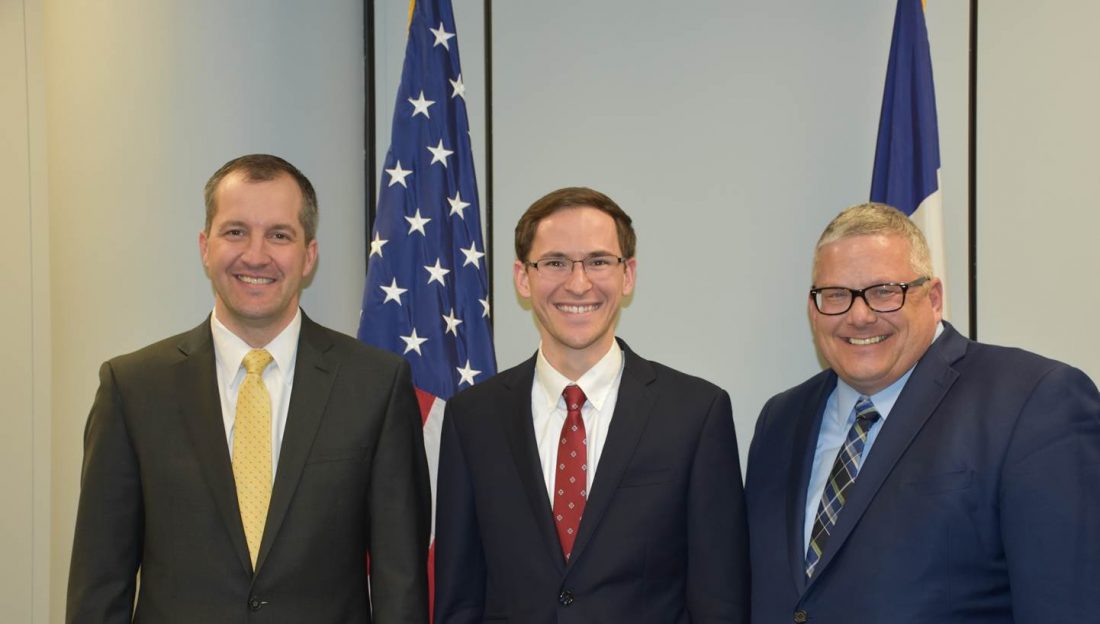 DES MOINES — As a seventh-generation Iowa farmer, Jacob Swanson grew up tending to cattle and working the soil.

Today, he works as often as he can on the family farm, but spends his workdays championing for farmers and agriculture at the Iowa State Capitol.

As the legislative liaison for the Iowa Department of Agriculture and Land Stewardship, Swanson said he has always had a passion for agriculture. He grew up in Wapello County near Ottumwa, where his family has farmed for more than 170 years. Currently, the family operation raises corn and soybeans, and has a beef cattle herd. It is farmed by Swanson’s father and uncle.

“They’re there on a day-to-day basis, but I still get down to help with planting, harvesting, and on nights and weekends when I can,” he said. “Even my grandpa helps out a bit when he can and we have a hired hand. It’s very much a family operation. Agriculture is in my blood.”

It was difficult for him to leave the family farm and head off to college at Iowa State University in Ames, but this 4-H alum felt a calling to become the fourth generation in his family to attend and graduate from Iowa State’s College of Agriculture. Swanson was always drawn to livestock projects as a youth and focused the brunt of his master’s degree on infectious diseases of livestock, primarily highly pathogenic avian influenza.

“I chose that for my thesis topic because, at the time, Iowa was going through an avian influenza outbreak, the worst animal livestock disease outbreak in U.S. history,” Swanson said. “So I wanted to choose a thesis topic relevant to Iowa agriculture that would help the Iowa ag industry be better prepared for other issues like it.”

After graduating with his master’s degree, Swanson landed a position with the Iowa Department of Agriculture and Land Stewardship (IDALS) working for ag secretaries Bill Northey and Mike Naig. He then accepted the position of legislative liaison with a new focus on helping farmers.

“I wear a lot of hats at IDALS,” he said. “I’m about to wrap up my second session and while in session, I am in constant contact with legislators from both parties and both chambers, so I’m always getting text messages and phone calls from legislators. My goal is to educate them about what IDALS would like to see happen pertaining to different pieces of legislation and legislative issues. Being an ag state, IDALS touches a lot of different areas, so I’ll educate the legislators about what we’re doing as a department and weigh in on any piece of legislation that may impact the Iowa ag industry overall.”

“While there are a lot of lobbyists that represent different companies or interests, legislators will look to me as the legislative liaison for a neutral, unbiased perspective on issues,” Swanson added. “Working in the secretary of agriculture’s office, our goal is to promote Iowa’s ag industry and grow it, so that’s the lens I work through.”

Agriculture touches Iowans in many ways and agriculture plays an important role in the state’s economy. Because of that, Swanson said everything done at the State Capitol is important to IDALS and farmers alike.

“We do everything from making sure your fuel pump is giving you exactly one gallon of gas and quality fuel to foreign animal disease preparedness,” he said. “We aim to prevent diseases like avian influenza and swine fever from getting into the state of Iowa. We cover entomology, pesticides, dairy regulations, and the environment. We are very big on prompting the responsible use of natural resources and are very focused on soil conversation and water quality. On a personal level, these things are very important to me because I grew up on a farm that’s been in existence for 170 years. I want to continue that legacy for future generations.”

Looking ahead to the fall session, Swanson anticipates a few issues carrying over from the current session. A few priority items that have been accomplished this year include the legislature agreeing to increase funding for foreign animal disease preparedness.

“We asked for $250,000 that will help the department increase our capacity for preventing, detecting, and responding to any foreign animal disease outbreak,” he said. “It would be a multi-billion dollar hit to the Iowa economy if one of these diseases were to make it into the state. Another bill we’ve been working on that’s been a priority for the secretary is the beginning farmer tax credit bill that essentially would raise the ceiling from $6 million tax credits to $12 million in tax credits and ultimately help beginning farmers get started in agriculture. Not everyone comes from a family that’s been farming for several generations, so that’s been a priority for Secretary Naig; to help beginning farmer get started. We are facing a labor shortage in agriculture and this is one way we’re working with the legislature to get more people into agriculture.”

Swanson said there is a “potpourri” of other issues ranging from animal welfare to help production and more.

“There was a bill that would allow elephant rides in the state of Iowa, so it’s a wide variety of things that could have an impact on the department and the ag industry,” he said. “And if anyone asks, we are pro-elephant. I actually had to lobby on that.”

IDALS also looks at what’s happening on a national scope and in other states to help guide on a legislative level.

“We are always in communications with other state departments of agriculture and what’s happening there, nationally, and globally, then we bring those back to the state of Iowa to help determine what policy issues we should try and tackle,” he said. “Trade is a big issue right now and we certainly face some challenges with the natural disasters from the flooding to drought. There is never a shortage of issues to work on. That’s one reason why I genuinely love my job. I get to work on a variety of different issues across the entire industry and work with a very diverse group of stakeholders and legislators ultimately working to improve agriculture for everyone in Iowa. It’s a really fun job and Secretary Naig is a pretty cool guy to work for, too.”