Gaels finish off Spartans to advance 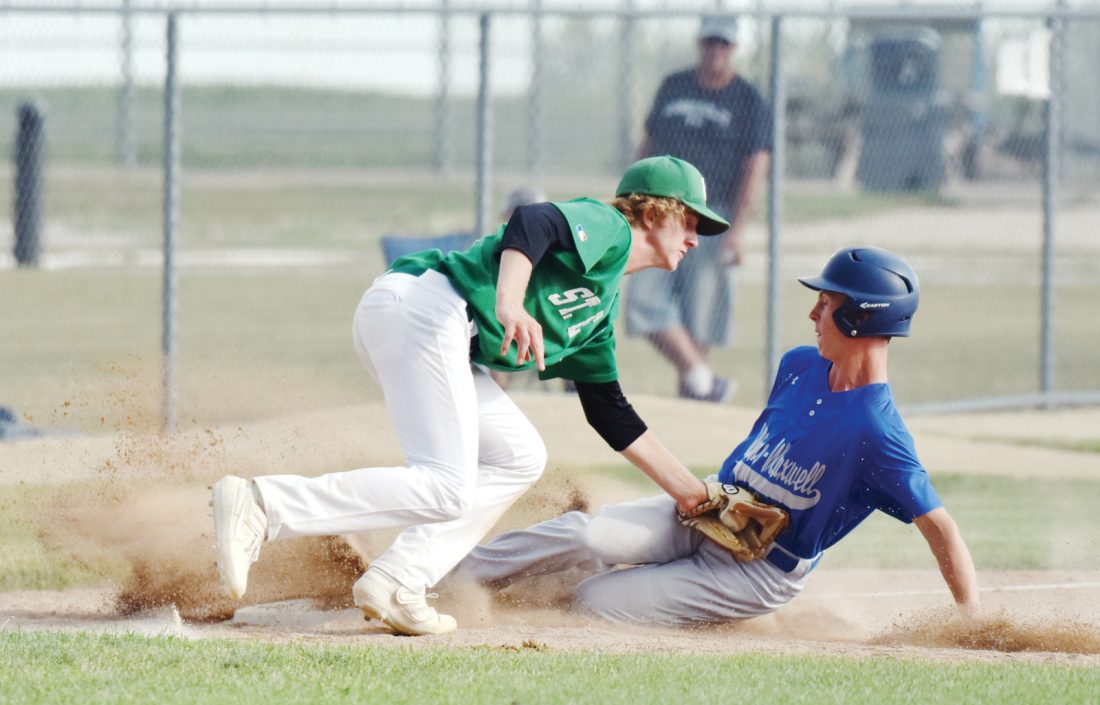 Messenger photo by Britt Kudla St. edmond’s Cael Kolacia records an out against Collins-Maxwell during a Class 1A district quarterfinal in Ogden. For more photos, please visit CU.messengernews.net

OGDEN — When it’s just about baseball, Mike Szalat has plenty of confidence and belief in his team.

As long as the other distractions don’t get in the way, the Gael head coach thinks his group will continue to be a tough out.

Only rain slowed the Gaels (5-3 overall) down over the weekend. Before that, COVID-19 had ended their regular season prematurely.

What about the trip back to Ogden?

“Road construction,” Szalat laughed. “And a bus that could barely get up the hills. Never a dull moment. I told (assistant) C.J. (Tracy) I was a little nervous because of how the year has gone and everything around us — not what happens (between the lines).”

Nothing kept St. Edmond from the task at hand once it took the field. The Gaels plated four runs in the first inning, three in the second, three in the third and three more in the fourth to bring the Spartans’ season to an end.

Senior Jed Tracy went 3-for-3 with three runs and a pair of RBI from the top of the order. Freshman John Nemmers had two hits, and senior Noah Carlson scored three times. St. Edmond smacked five doubles: two by Grant Heldorfer, and one each from junior Peyton Scott, Tracy and Nemmers.

“When the top three guys in our order can go 6-for-10 with seven runs scored and four (RBI), that’s going to win us games,” Szalat said. “Because we know we’re going to get strong pitching from guys like Cael (Kolacia) and Peyton.”

Kolacia, a junior, surrendered two unearned runs and struck out seven in just three innings of work. Scott worked the final two frames — including the last one on Monday — and whiffed a pair.

The Gaels, who were on the field for less than 10 minutes on Monday after making the 45-minute one-way trip, now come back on Tuesday to take on top-seeded Ogden (8-6) in the semifinal round. The Bulldogs advanced via a first-round bye.

“We know the way by heart,” Szalat said of SEHS’s return to Ogden. “We’ll just keep pushing the pace and trying to put pressure on the defense. I was a little worried about not seeing live pitching for 14 days, but the guys stepped up and looked comfortable. We’ll see better pitching (against the Bulldogs), but we’ll be ready.

“It’s just great to see the progression of the upperclassmen. It’s really come together nicely for them, and it’s a real incentive for the younger kids to keep working, knowing the results are there if you put in the time.”

The Gaels face Ogden at 7 p.m.