With his community supporting him every step of the way, Williams fights back from a sudden stroke 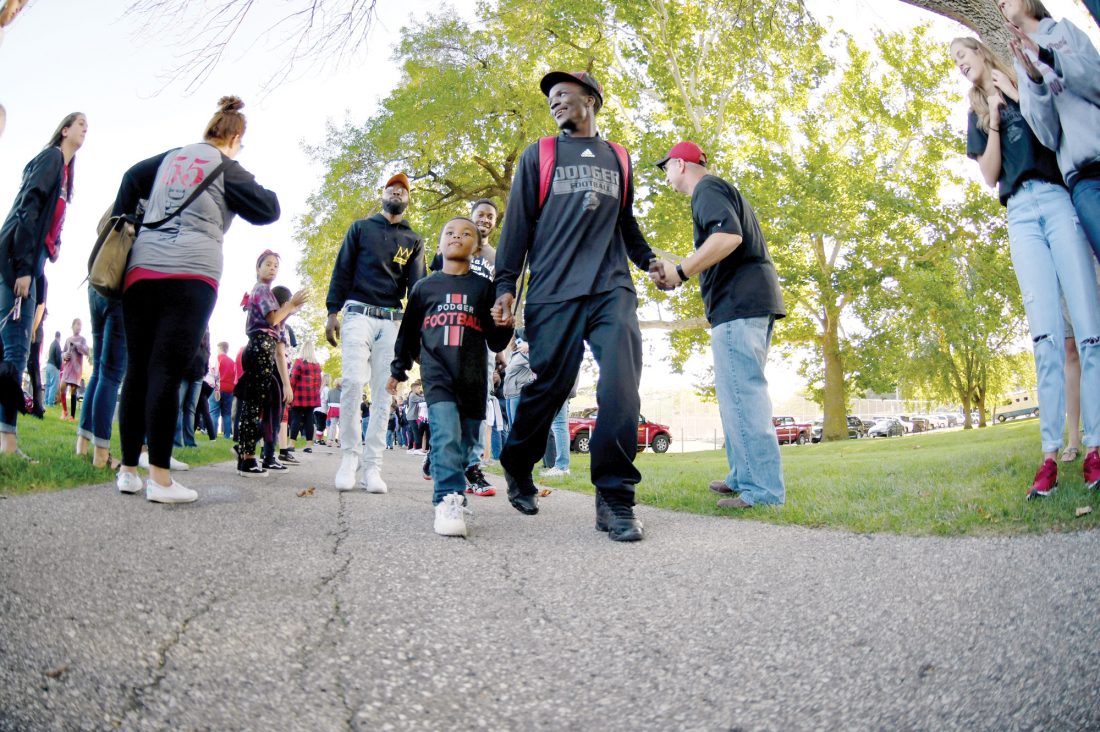 Messenger photo by Britt Kudla Willie Williams walks with his son, Willie Jr., toward Dodger Stadium before a Fort Dodge football game this past fall.

Not just the raw emotion of a postseason win. That came first.

As a coach, there’s nothing like it. So when Fort Dodge’s 28-year-old boys basketball assistant — a former Dodger player himself — was able to celebrate his team’s Class 4A substate quarterfinal victory over Sioux City West on Feb. 24, he took full advantage.

“I’m jumping around with all of the guys in the locker room,” Williams said. “We’d just won our first playoff game (after struggling all year). Everyone was excited, and I couldn’t have been more proud.”

And then it hit. The energy and excitement quickly gave way to something unknown.

A feeling Williams had never experienced before.

“We’re on the bus and I started getting dizzy,” said Williams, a 2011 Fort Dodge Senior High graduate. “I couldn’t see the road. I even got really hot to the point that I put my face on the window for some cold air.”

The most terrifying 72 hours of Williams’ life — even if he didn’t know it yet — had begun.

When the team returned to Fort Dodge from Sioux City late that Monday night, head coach Tom Daniel and his assistants all expressed concern over Williams’ well-being.

“We got to the high school and all of the coaches were asking if I was OK,” said Williams, a behavior interventionist at FDSH. “I kept telling them that I was fine. Looking back, I shouldn’t have driven home. I remember not even being able to see the road, but I made it because it’s the normal route I take.

“I got there and told my wife (Paige) I needed to go to the doctor. I knew something was wrong. But I threw up when I got in the car, and I started feeling better after that. So I told her to turn around. We got back home and I went to bed.”

Williams’ condition didn’t improve the next day. He said his head was “hurting really bad,” and he couldn’t “get everything on the same page” with his movement. Eventually, he went to the emergency room.

“I don’t remember much from that point on,” Williams said. “I was out of it the whole time. I kept reminding myself I was going to be OK. When I got (life-flighted) to Des Moines in the helicopter, though, I could tell something was seriously wrong. The next thing I knew, I woke up and had tubes all over my body.”

Doctors determined Williams had suffered a right cerebellar infarct — or a cerebellar stroke. They performed successful emergency surgery to relieve pressure on Williams’ brain, and he spent the next 31 days at Mercy Medical Center in Des Moines on the Neuro/Trauma/Medical Intensive Care floor.

“I remember (waking up and seeing) my wife, my mom and my sister standing there,” Williams said. “My mom lives in Memphis, so I knew if she just left everything to come all the way here, it must be bad.”

Thankfully, Williams is on the mend now. He’s at On With Life rehabilitation center in Ankeny, almost three months into his recovery.

“It’s been hard, both physically and mentally,” Williams admitted. “Physically because no one wants to be laying in bed with tubes all over them. Mentally, because I am known for being healthy and I just want to go home with my family.”

That day is hopefully coming soon. Williams is scheduled to return to Fort Dodge no later than May 28.

“The rehab process has been both good and hard,” Williams said. “You have to get up every day and find the motivation to do it, but I feel myself getting better and better. I had to learn how to walk and talk all over again. So much has been impacted and changed due to my stroke.”

Williams is quick to add that in retrospect, “I should’ve gone and gotten checked out.” The exact cause of the stroke still isn’t known, though Williams — a former standout athlete at both FDSH and Iowa Central — has dealt with high blood pressure before.

“Looking back, I should’ve listened to my wife, my mom and my sister about going to a doctor,” Williams said. “But I’ve never really had health problems before this happened, so I just didn’t (take some of the warning signs serious enough).”

Williams is just taking things moment by moment as he prepares for the next step. He said, “I’d guess I’m at about 65 to 75 percent” of the way back to full health.

“I’m making progress every day, but I’m not where I need to be,” Williams said. “I ask myself, ‘why me?’ sometimes, but you never know the answer to that. So I just started telling myself to focus on the positive things I have going on in my life.

“My short-term goal is to just do my best with rehab, and get back to walking and talking (at a normal level). (On With Life) has been a great place for me (to recover, where Williams has been since March 27).”

Being able to hold his wife and kids soon — son, Willie Jr., age 5, and daughter, Pipar, 8 months — is the ultimate reward and light at the end of the tunnel. Because of strict rules at rehabilitation facilities due to the global pandemic, Williams hasn’t seen his children face-to-face since arriving in Ankeny almost seven weeks ago. He’s only been with Paige in person twice — six feet apart and wearing masks — during that period of time.

“They mean everything to me,” Williams said. “As much as I’ve wanted to come home and they’ve wanted me home, they understand that I have to get better for that to happen.

Williams credits the Fort Dodge community with “the love and care” to inspire him during the journey back.

“It’s just been huge for me,” Williams said. “I can’t tell you how many messages or phone calls I’ve had. It shows how many people care in this world. I have so much love for our town.

“It’s important that I keep a positive attitude. I’ve come a long way thanks to my family and support system and everyone who cares about me getting better. I look at it now like, ‘what could be worse?’ I’ve been through the storm and rain and I’m still standing…thank God.”