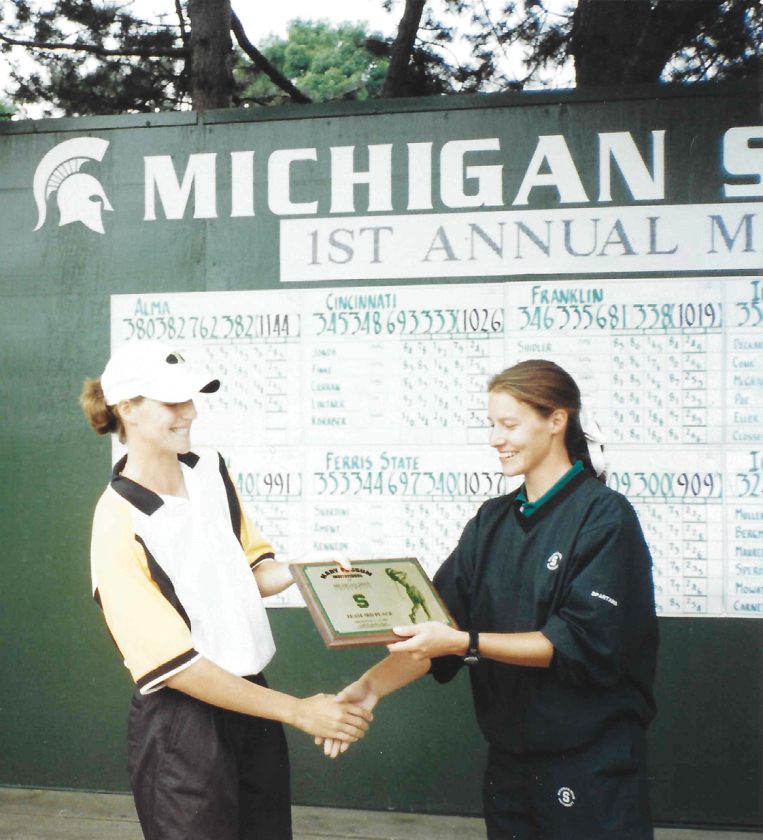 Golf has always been a part of Stacey (Bergman) Winter’s life and the journey that the game has taken her on, is a resume any athlete would want.

Bergman, a 1996 Fort Dodge Senior High graduate, was a three-time state champion, and a collegiate golfer that ultimately reached the professional ranks.

But her journey started with the backdrop of Fort Dodge golf courses, surrounded by her family.

“As a child, I spent untold hours on the golf course with my brother (Scot) and father (Don),” Winter said. “They certainly instilled a competitive spirit in me and made the game fun. To this day, we have heavily contested matches.

“I enjoyed the competition and opportunities golf afforded me in high school, college and professionally. Golf has served me well in business and is my favorite social backdrop and is now something I am teaching my kids.”

Winter rewrote the Dodger girls history books as a singles state champion (1995) and a two-time co-ed doubles champion (1994 and 1996). She was a three-time state singles runner up.

“In order to qualify for state as an individual, you had to win both sectionals and regionals,” Winter said. “It was at state every year that I would meet up with my rival — Mary Catherine Mullen. It was the only time in the year I would see her as she was from Dubuque. She bested me in three of the four contests, but each year the overall scores dropped — we pushed each other.

“Ultimately, we went on to be teammates at the University of Iowa, where we became friends, but remained fierce competitors. Every week we would vie for who would play No. 1 for the Hawkeyes in the upcoming tournament. This rivalry not only kept us focused, but elevated the performance of the entire team.”

Winter won her first state crown in 1994 (co-ed doubles) as a sophomore and capped her career with another as a senior in 1996.

“I partnered with Jeff Peterson in 1994 and Matt McIntyre in 1996,” Winter said. “The co-ed tournament is a fun, but challenging, alternate shot format. I was great friends with both Jeff and Matt.

“We spent our summers together on the golf course. The genuine friendship and countless rounds of golf we played together made being teammates easy.”

While competing in high school the competition was tough at the top tier, but Winter enjoyed building friendships on the course.

“The competition was strong at the top but didn’t have the depth you see in women’s golf today,” Winter said. “Tiger Woods came on the scene when I was in college. Prior to that, golf wasn’t a popular sport for kids. I started competing in golf tournaments when I was nine years old. I played most of my junior golf competing against the boys as few other girls played. My brother, was of course my biggest competitor and driving force.

“I met Nikki (Schultz) Birkett in middle school. We became fast friends. She was a very solid teammate and contributed significantly to the Dodger girls golf team success from 1993 to 1996.”

After high school Winter hit the college ranks. She started in Iowa City and finished in Knoxville.

“I had the unique experience of playing for two universities in two different conferences,” Winter said. “I was proud to represent the state of Iowa as a Hawkeye, but knew if I wanted to play professionally, I needed to get further south. The weather and travel schedule didn’t promote the development in my game I needed. After winning the Big 10 conference title as a sophomore, I took the opportunity to look elsewhere.

“Being a Volunteer at the University of Tennessee provided rigorous competition, a superior coaching staff and state of the art facilities. My senior year we finished fifth in the country at NCAA’s in Oregon. My brother, dad and mom were in the gallery. It was arguably the best culmination of a collegiate career I could have hoped for. The transfer better equipped me to play professionally for the four years following graduation.”

Winter was not only a standout golfer at Fort Dodge Senior High, she was also a leader on the basketball team. She is currently 10th on the school’s all-time scoring list and was part of the Dodgers state qualifying team in 1995.

“Basketball provided a completely different competitive outlet. I enjoyed the fast-paced, team aspect of the game. I also loved playing defense which you don’t get to do on a golf course. There is still nothing more satisfying than blocking a shot,” Winter said. “We qualified for state my junior year. We were stacked with talent ((Tammy)Utley, (Andrea) Underberg, (Stacy) Peters, (Heather) Lloyd, (Heather) Dalton, (Molly) Nelson and (Megan) Netland). Most went on to play a collegiate sport. We had great team chemistry and respect for the contributions each player brought to the dynamic.

“Qualifying for state was an especially exciting feat for me as I had surgery in the fall on my left leg to remove a cancerous bone tumor. I subsequently missed the fall volleyball season and played the basketball season with a rod and two screws in my femur. I was unsure at the start of the season if I would be medically released to play, so making it to state was a rewarding conclusion.”

Winter now lives in San Jose California where she is an Area Sales Director for Lumenis.

Winter is married to Sam Winter and they have two children, Jack (seven) and Raleigh (six).

While reflecting on her Dodger career, Winter was proud to be a Dodger and receive the support that she did.

“I enjoyed every moment of being a Dodger. I had the opportunity to work with great coaches including: Mic Julson, Hans Goettsch, Dawn Anderson, Kim Vaughn and Tom Kinseth,” Winter said. “I always wanted to run for Peg Christensen, but track conflicted with golf. I want to thank high school coaches past and present, for devoting their time and energy to developing and mentoring young adults.

“My best friends, and friends to this date (Nikki Schultz and Tammy Utley), were Dodger teammates. Competing together as Dodgers solidified our friendship and probably kept us out of trouble.

“I was proud to wear the crimson and black. I think I stood a little taller when in uniform. I always felt the support of the community and very much appreciated the fanticism of Dodger Denny (may he rest in peace).”