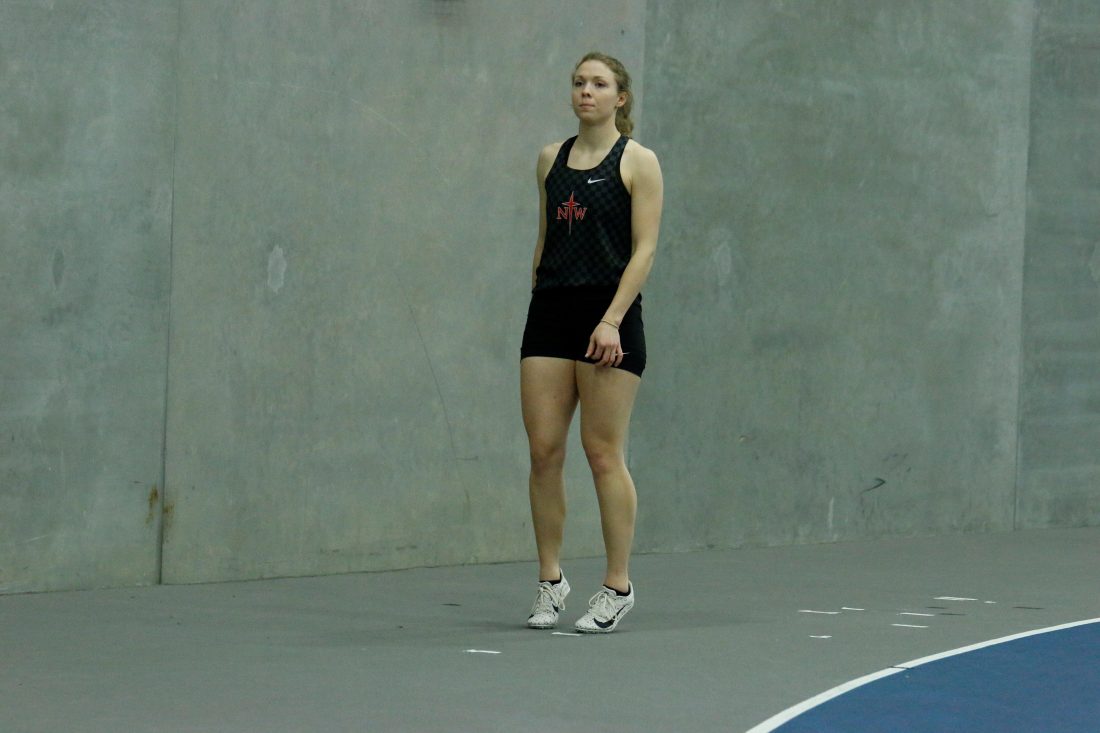 —Submitted Photo Allison Birks competes in the high jump during the pentathlon. The South Central Calhoun grad is a junior at Northwestern College.

Those skills have carried over with her to Northwestern College, as the junior has taken on the position of multi with the Red Raiders.

Birks, an all-stater in volleyball and an all-conference selection in basketball for the Titans, recently earned all-Great Plains Athletic Conference status for her efforts in both the pentathlon and high jump for Northwestern.

“Being a multi was mentioned to me by Coach (Scott Bahrke) when I was a freshman, but I played volleyball my first two years of college and so I didn’t have the time to train in the fall and learn the new skills,” she said. “When I decided not to play volleyball this fall, it was brought back up again and I decided to give it a try.

“Coming into the multi, the only skills I had were running. I’ve never hurdled, high jumped, long jumped or thrown the shot, or had I even ran an 800.”

With 2,950 points, Birks earned a provisional score for the 2020 NAIA National Indoor Track and Field Championships, placing sixth in the pentathlon. A day later, she finished tied for eighth in the high jump at the conference meet held in Mitchell, S.D. at the Dakota Wesleyan University/Avera Sports and Wellness Complex recently.

“It was a huge surprise hitting the provisional mark because it was not at all on my radar,” said Birks, who will not be competing at nationals as only the Top-16 scores advance. “I was really just hoping to compete and have fun and maybe have some success considering I am very inexperienced.

“I am pleasantly surprised with how it went and it was super rewarding that my hard work paid off.”

In her first attempt at the pentathlon this year at the Dennis Young Classic, Birks was third overall. She also won the Buena Vista Early Bird high jump title and placed fifth in the 200 at the same event.

For help on preparing for the many different events, Birks went to her old high school coach, Brian Knapp, and father, Dave, for advice and training.

“It took a lot of extra hours in the summer before college with Mr. Knapp and my dad learning to hurdle and long jump,” she said. “Over Christmas, we worked on the shot put.”

Birks has competed both indoor and outdoor for the Red Raiders since 2018 in track.

She was a four-year state runner for South Central Calhoun, earning a medal in the 100 as a junior. Birks’ sister, Haley, was a basketball player at Northwestern.

The focus now shifts to the outdoor season and the heptathlon, which adds in the 200 and javelin.

“The 200 is something I’ve done my whole life, so that will hopefully add to my success,” Birks said. “Coach Bahrke and Coach (Tim) Vander Ploeg have been so helpful in teaching me and pushing me to be the best.”

Outdoor meets begin March 28 in Storm Lake for Northwestern, with the team hosting the two-day Red Raider Open on April 8-9. The GPAC Championships are May 1-2 with nationals May 20-22 in Gulf Shore, Ala.