Moser to take over FDSH program 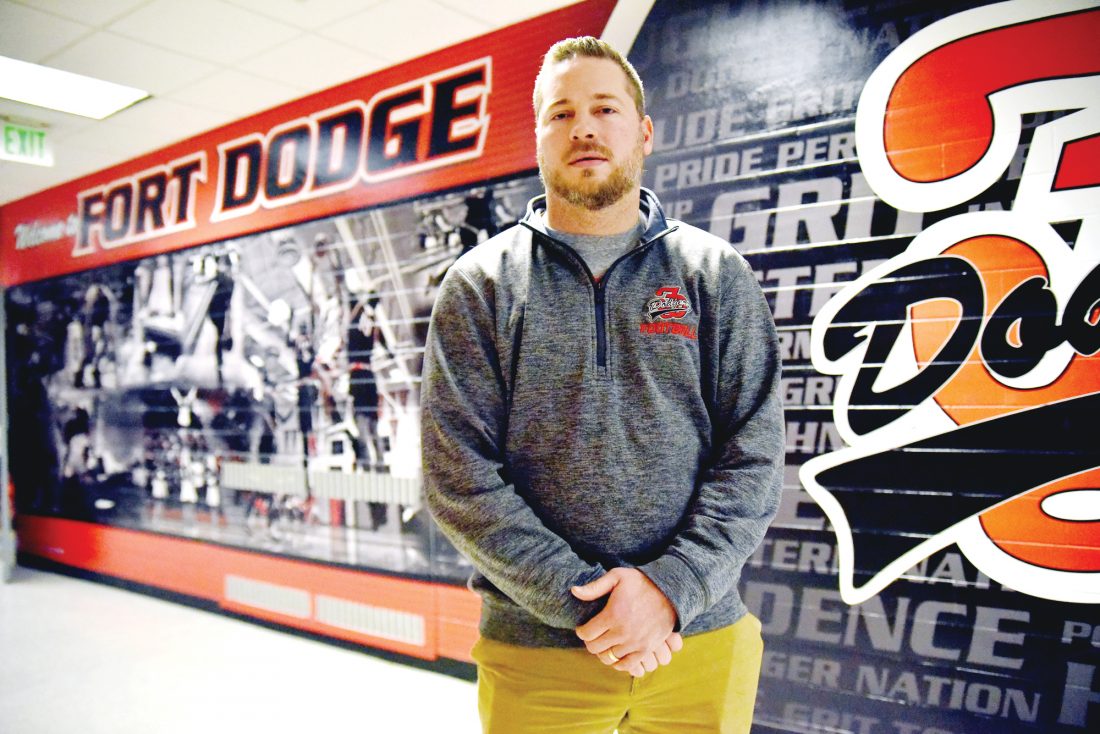 When Nik Moser was a 12-year-old ballboy on his dad’s 1994 Fort Dodge football team, one of the Dodgers’ student managers asked him what he wanted to be when he grew up.

“I still remember the conversation to this day,” Moser said. “And this is the honest truth: I told her I wanted to play in the NFL someday, then come back and be the head coach at Fort Dodge.”

The first dream didn’t quite happen. The second is about to become a reality.

Moser was named the new FDSH football coach on Thursday, pending official board approval later this month. Matt Miller’s long-time assistant will now have the opportunity to walk in the footsteps of both his father and three of his mentors on the sidelines of historic Dodger Stadium.

“I’m incredibly honored and looking forward to the challenge,” said Moser, a 2001 Fort Dodge Senior High graduate. “It’s a special day for me, and I hope, Dodger football. Given three of the biggest influences in football – my dad (Sam), Matt Miller and Mike Woodley – have been (at the top of the program) every year since 1983 and now it’s in my hands…it’s a responsibility and position I have deep respect for. I have my whole life.”

This may seem like a legacy pick on the surface. The 37-year-old Moser took a very unconventional route to this moment, though, from the time he first joined Miller’s staff almost on a whim as a part-time volunteer assistant while working at a local bank.

“I was fortunate enough to have Matt bring me on board (before the 2008 season) just to help out when I could,” said Moser, who was an all-state defensive back for the Dodgers before becoming a multi-year starting safety at Iowa State University. “I had graduated (from ISU) in 2005 and we moved back, but I can’t necessarily say anything full-time (in coaching) was on my radar at that point.

“I knew I still wanted to be involved with football in some capacity (after his Cyclone career), but wasn’t sure about the timing or what that would look like. Once I got involved here and got to be around high-school aged kids more, it started to feel like a calling.”

Moser said “about six or seven years ago” is when he really began to give head coaching at the prep level serious consideration.

“I started to research how I could work my way up to that level, whether it be here or someplace else, even though I wasn’t a teacher,” said Moser, also a multi-time state track champion for the Dodgers. “I thought briefly about college, but that (idea) never really stuck. It was all about high school at that point. That became my motivation.”

Moser first served as a defensive coordinator under Miller, then took over the offense. As Miller’s right-hand man, the Dodgers became a steady, well-respected Class 4A program in central Iowa.

Fort Dodge is 58-49 over the last 11 seasons, and the most recent decade of football was the Dodgers’ most successful stretch record-wise since the era of the 1940s.

Miller stepped down after 16 years at the helm in November. He became the program’s all-time winningest coach this past season.

“I learned so much from Matt: how to be a better coach, and more importantly, a better leader and mentor to these young men,” said Moser, who was inducted into the FDSH Hall of Fame in 2014. “Matt had such a great attention to detail; he knew everything that was going in these kids’ lives, not just in our program, but at home. He taught me more about the little things and how much they matter.

“I couldn’t be luckier, having role models like my dad, Matt, Mike Woodley, Dan McCarney, Chris Ash, John Skladany…you don’t always realize it when you’re a player, but you definitely appreciate who they are and what they’ve stood for through the years when you become a coach yourself.”

Moser added that in college, his dad told him to “keep a notebook and write down” what he learned about the game if he ever wanted to be a coach himself someday.

“I still have that,” said Moser, who was also recently named the Fort Dodge Community Schools Foundation director. “The good, the bad, and everything in between. I wanted to learn from them, and then shape the way I coached based on that combined with my own experiences and my own style.”

Moser will be just the third Dodger football coach in the last 31 years. After Woodley’s tenure from 1983-88, Sam Moser took over and held the position through 2003. Miller was promoted three months after Sam’s retirement.

“I get emotional talking about it,” Nik admitted. “It’s hard to put into words how much my dad means to me. He’s the biggest influence in my life, my best friend, and the best coach I ever played for. I know this is a proud day for him, and it is for me, too.

“My dad, Matt, Mike and all of the coaches (from Iowa State and elsewhere) I consider close friends have taught me it isn’t just about the Xs and Os, but how you treat kids. I think we have set a tremendous standard when it comes to that here, and I want it to continue. A program is only going to be as successful as the kids who are involved. If you show an honest, sincere investment and respect in them, they’ll respond.”

Moser and his wife, Katie, have three sons in the FDCSD: Sam, a fifth-grader; Lou, a second-grader; and Mack, a first-grader.

“Coach Moser has shown that he is all-in when it comes to our football program, our kids, and our community,” FDSH principal Staci Laird said. “We are excited to see where his passion, focus and knowledge take the program moving forward.”

“I can’t thank Dr. (Jesse) Ulrich, Mrs. Laird and (athletic director) Mr. (Kevin) Astor enough, along with the (search and interview committees),” Moser said. “I’m grateful for the opportunity, and I’m looking forward to working with them.”

Moser is “confident the culture of Dodger football is on a firm foundation.”

“It has been for a long time, really,” Moser said. “I think it was started even before my dad. And to me, every coach has left the program in better shape than when they took over. We all still communicate to this day about Dodger football.

“Fort Dodge is a football town. This community shows tremendous support and has always been there for this program. I have always admired that about us. I consider myself blessed to still be a Dodger, and my family feels the same way. This is home.”