Crooks named 1A player of the year 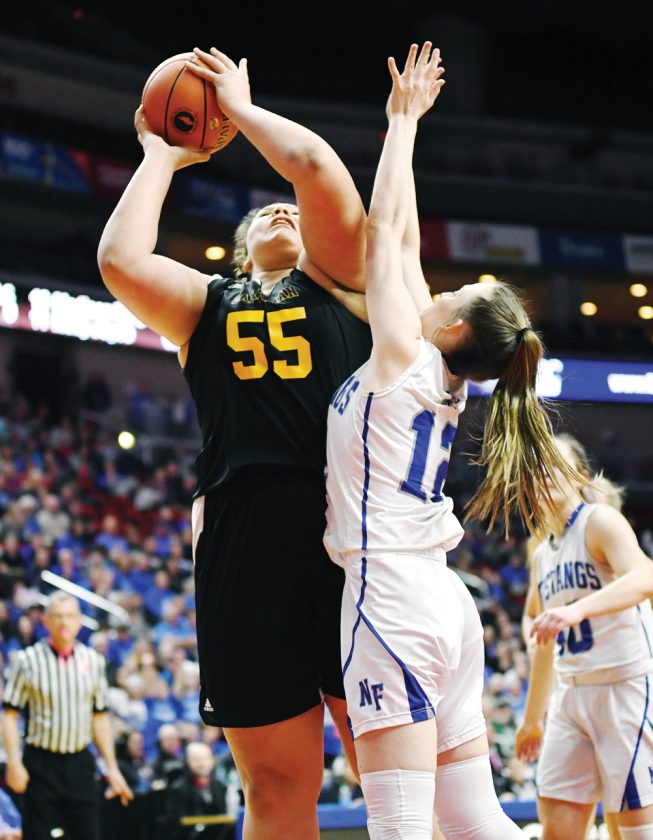 Messenger photo by Britt Kudla Audi Crooks drives for Bishop Garrigan against Newell-Fonda in the 1A state championship game earlier this month in Des Moines.

ALGONA — Audi Crooks may only be a 15-year-old freshman, but she plays like a senior and thinks like a veteran.

With all of the success and awards coming her way on the basketball court, the prep rookie maintained her composure and stayed humble through the process.

On Wednesday, Crooks was named the Iowa Basketball Coaches Association (IBCA) Class 1A Player of the Year.

“In a class full of talented girls, it means the world to me (to be named player of the year),” Crooks said. “It’s more than I ever envisioned. I am just truly grateful and honored.”

Bishop Garrigan coach Brandon Schwab knew what he had in Crooks from the moment she stepped on the court.

“Audi is very humble and understands the process,” Schwab said. “She gets a lot of buckets from her teammates, because they get the ball where it needs to go. So the first thing she does is thank them.”

The 6-foot-3 post wreaked havoc in Class 1A this season, leading the Golden Bears to within an eyelash of dethroning two-time defending 1A champion Newell-Fonda.

“Without a doubt, there is a lot of excitement in our program,” Schwab said. “The players we have coming back and coming up through the ranks are excited.

“I don’t think Audi has even scraped the tip of the iceberg yet. I think she going to get better and better. She’ll be working on her game, playing in AAU games and going to individual camps.”

Crooks, the daughter of 1986 Fort Dodge Senior High graduate Jimmie Crooks and former Golden Bear standout Michelle (Vitzthum) Cook, became the state’s all-time freshman scoring leader with 626 points this past winter. She also broke the freshman record for field goals made with 270, and had a 70.7 field-goal percentage, second best all-time among freshmen.

Crooks was the third-best freshman rebounder ever at 320 boards.

Crooks took center stage at the 1A state tournament as the event’s captain. She led the way with 76 points and a 25.3 points per game average.

Coming from an athletic family, handling and shooting a basketball became second nature early on.

“My biggest influences are my parents,” Crooks said. “They helped instill the love of the game in me. They support me endlessly.”

As tough and solid as she is on the court, Schwab saw Crooks’ leadership and lighter side impact the program as well.

“Off the court, Audi is laid back. She is funny and always joking around,” Schwab said. “She picks the music we are listening to, and is very easy to talk to in conversations with stuff that doesn’t even involve sports.

“Audi proved at state that she doesn’t get rattled. She was locked in.”

The freshman post player has garnered a lot of individual attention, but she admits it is far from her own doing.

“Another huge influence has to be my teammates,” Crooks said. “Knowing that the girls I play with trust me completely is a great feeling and I take pride in that.

“I also feel as if they hold me to a certain standard, which constantly pushes me to do more and never be satisfied.”