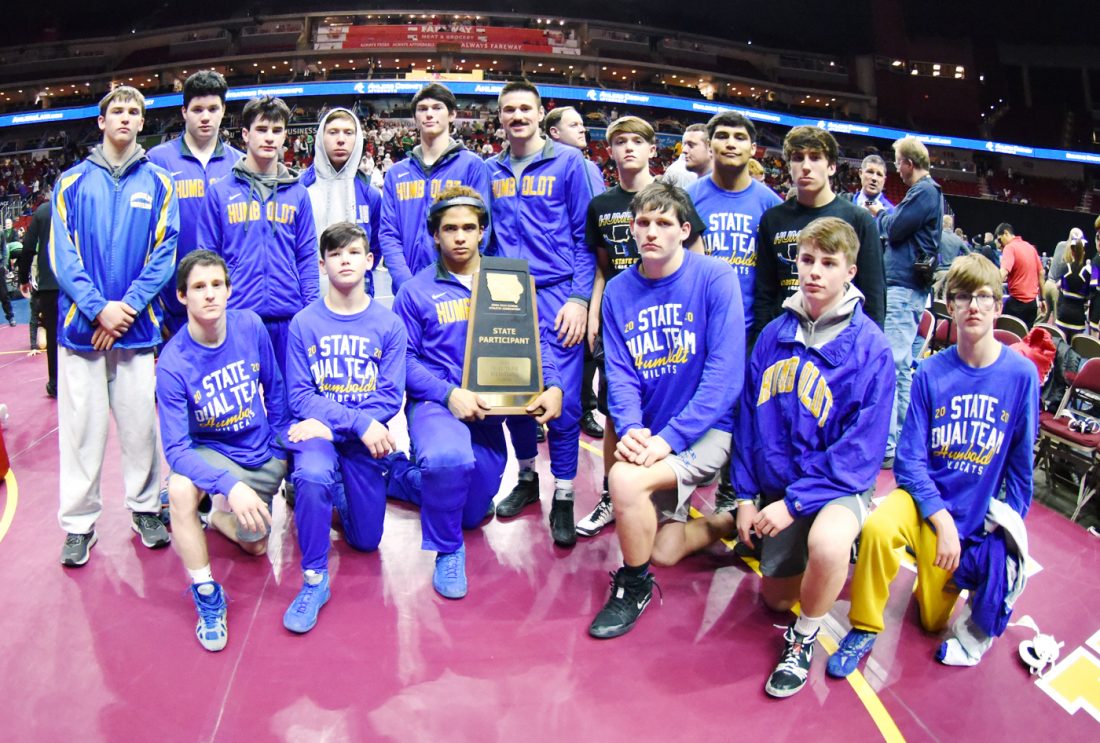 Messenger photo by Britt Kudla Humboldt poses together as a team at the state duals wrestling tournament on Wednesday at Wells Fargo Arena in Des Moines. For more photos, please visit CU.messengernews.net

The Cowboys, regulars at this event over the past several years, finished seventh in Class 1A while the Wildcats placed eighth in 2A.

Both will have three wrestlers in action at the traditional state meet beginning Thursday back here.

The Cowboys opened the tournament with a 74-6 loss to Lisbon followed by a 43-33 setback to Denver. Nelson had the lone win vs. Lisbon, registering a fall, with Garrett Seaba, Nelson, Chavez, Rigo Bobadilla, Remington Hanson and Abbas earning wins vs. Denver.

Stein, Abbas and Seaba are all state qualifiers for Clarion-Goldfield/Dows and will hit the mats at 6 p.m.

In the dual for seventh, Humboldt won six of the first nine matches, but could not get back on track, falling to Sergeant Bluff-Luton, 38-33. Levi Naeve, Walt Delanoit, Colton Goodell, Jayden Gargano, Cole Nelson and Jase Goodell had wins.

Delanoit and Jase Goodell each picked up falls.

The Wildcats fell in their first dual with West Delaware, 60-12. Nelson and Cresten Craven earned falls, with both coming inside of the first period.

Nelson, Jase Goodell and Colton Goodell will all compete at 1:30 p.m. for the Wildcats.