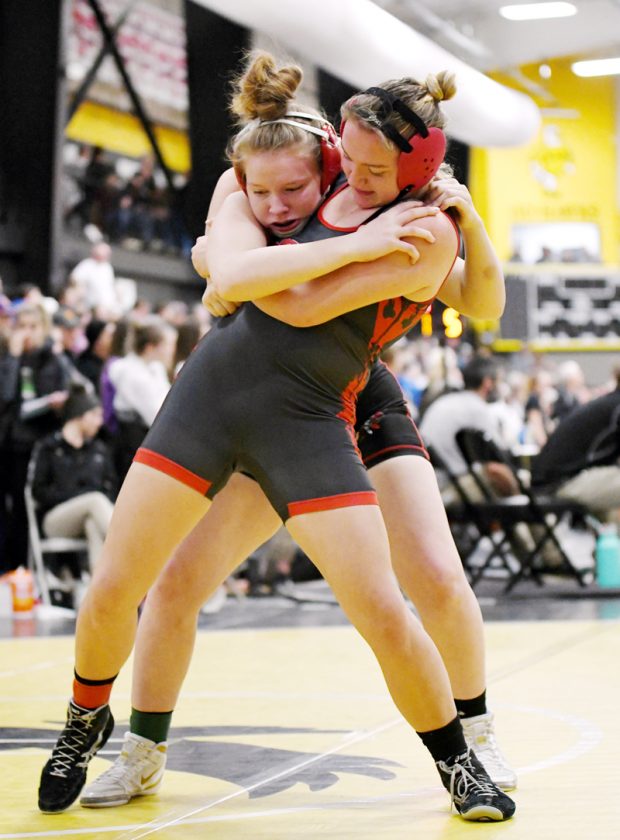 WAVERLY — With two more years left in her high school career, St. Edmond’s Elly Berry is excited for the opportunities that lie ahead.

Berry, only a sophomore, competed at the IWCOA Girls State Championships this weekend, earning one victory in three matches and setting the stage for the next two seasons.

“My experience was great,” Berry said. “I was very nervous throughout the tournament. The atmosphere was good, too. I met some wrestlers who were very nice and we had some great conversations.

“It’s nice to know I have two more years to compete at state, because I can work on the things that I did wrong and learn more moves for the upcoming years to achieve my goals.”

“What a great experience for her (Berry),” said SEHS head coach Eugene Carlson. “I’m so happy she was able to get that one win. In her first match, she was a little star-struck and didn’t wrestle to her ability, but came back and got the win.”

Berry suffered a loss in her first match, but bounced back with a fall over Ellie Fuller-Long of Durant in the third round of the consolations. Her tournament came to an end by fall versus Anamosa’s Emily Waters.

With over 375 girls in only the second IWCOA event, Carlson likes the direction the sport is headed.

“This is a great thing that IWCOA is doing,” Carlson said. “Elly, just like everybody else, got the experience, and this is definitely something she can hopefully improve from.

“Elly and Alexis Ross — what a great opportunity for the two of them here (in Fort Dodge). Congratulations to her (Ross) for getting third. She is a hard worker.”

With Kendal Clark winning the 170-pound championship and earning 22 victories, the Wildcats finished seventh in the team standings with 91 points. Waverly-Shell Rock was the champion with 156.5 points.

Humboldt had three quarterfinalists after the first night of wrestling. Clark took the championship, while Deni McDaniel (126) and Maria Elizond (170) also advanced.

McDaniel (6-5) lost her quarterfinal match by fall to West Liberty’s Mylei Henderson, then suffered a setback in her next match.

Elizond lost in the quarters to Bailey Walsh of Waverly-Shell Rock, and then fell on the consolation side.

Woeste had a fall (1:56) in the consolation first round and another pin (1:02) in the second round. She lost by fall to LeMars Brooke Rood in the seventh-place match.

Humboldt sent 12 wrestlers to state and picked up 22 victories during the two-day event. Kirstyn Beaman (126) had five victories, while Mady Lange and McDaniel had three each.

Algona’s Sophie Degner (10-2) ended the event with a seventh-place finish at 152 pounds. Degner suffered a loss in the first round, but reeled off four straight victories, including three by fall. She suffered a 10-2 setback in the fifth round on the consolation side.