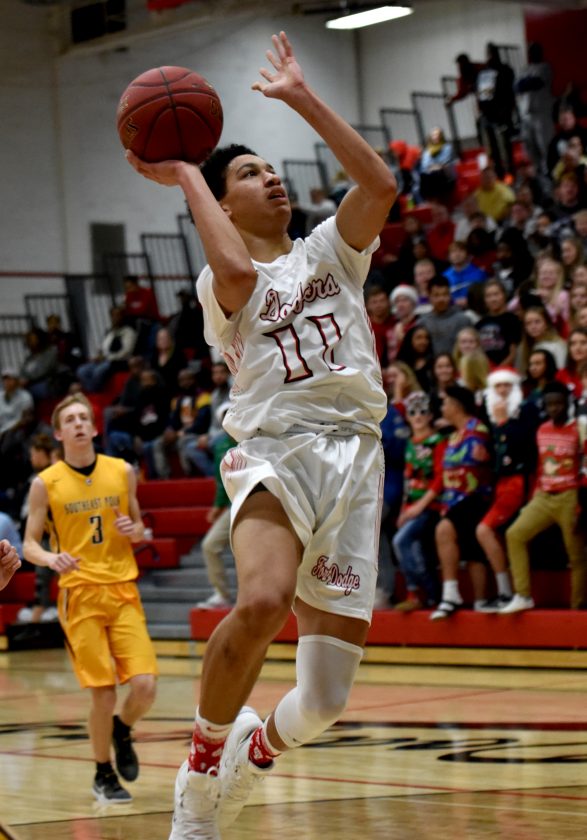 -Messenger photo by Britt Kudla Tysen Kershaw of Fort Dodge goes up for a shot against Southeast Polk.

THE TIP: Varsity girls starts at 6:15 p.m. with the boys to follow inside the Dodger gym.

LAST TIME OUT: The Dodgers lost to Urbandale 64-7. Bennett, Adams and Jebreauna Clark led the way with eight points each. Doster pulled down 12 rebounds.

ABOUT AMES: Ames is coming off a 53-42 victory over Ottumwa. Three players reached double figures, led by Iiams 19 points. Waite had 12 and Lipsey had a double-double with 15 rebounds and 10 points. Ames has also beaten Des Moines East, while losing to Waukee and Mason City.

LAST TIME OUT: The Dodgers suffered a 66-44 loss to at Urbandale. Fort Dodge is coming off a three-game road trip.

ABOUT AMES: Ames is coming off a win against Ottumwa. In their first contest of the season, they lost to Mason City. DeLisi led the way with 16 points, while Brooks has 14 and Downs added 11.