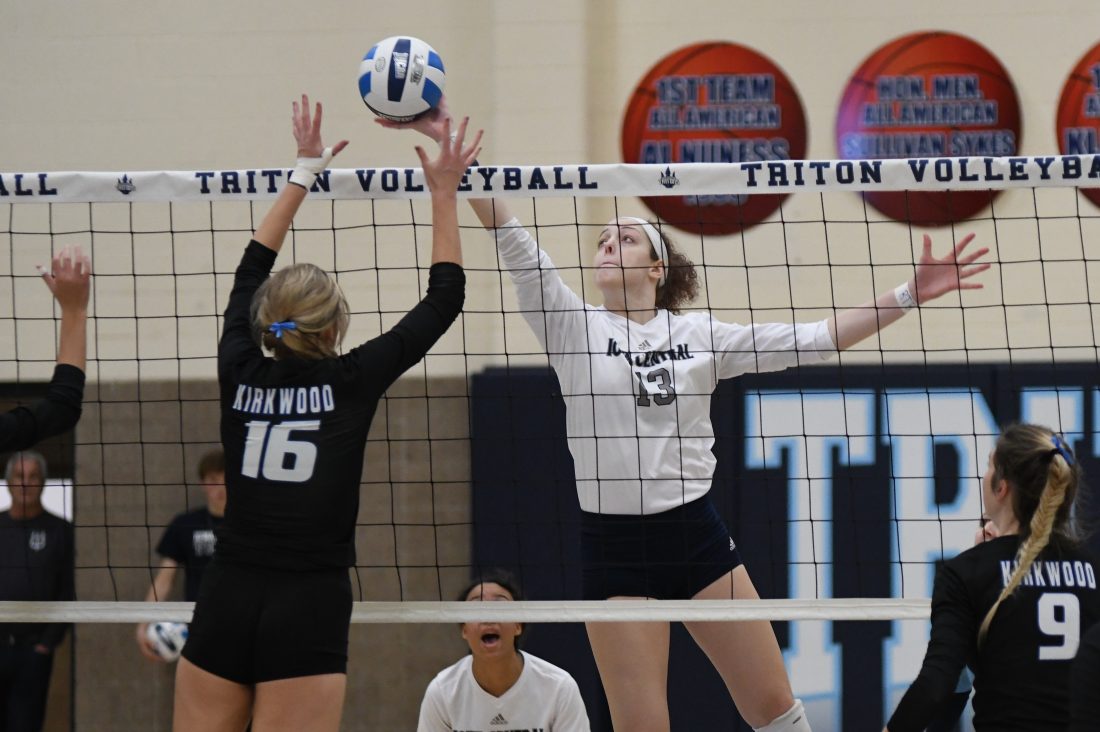 The venue was slightly different, but the end result was the same for the Iowa Central volleyball team Sunday.

After claiming the ICCAC regular season title and No. 1 seed in the Region XI-A Tournament, the Tritons were upset by Kirkwood inside Hodges Fieldhouse in four.

Kirkwood will now advance to the North Central district championship this Saturday for a spot in the NJCAA Div. II National Tournament. They will face Metropolitan in Missouri.

“We tried not to think about it being a case of deja vu, but it definitely felt that way,” ICCC head coach Sara Horn said. “We knew Kirkwood was a good team and they played a really great match. I thought we played well too and it was really just a good match between two teams.

“In the end, we did a few things that I haven’t seen us do in critical situations this year. Maybe that was the pressure that came with it because this was a very pressure-filled match.”

Amaya Finley, who earlier this year became the program leader in kills, led the way with 22. She also had 19 digs in her final match as a Triton.

Taylor Bienemann recorded 27 digs and Alesha Johnson had nine with 25 assists. Katie Godfredsen had 19 assists and 12 digs on the day.

Santos, Stewart and Alharithy all had one solo block each.

“We just didn’t really find a lot of consistency out on the court or get in a good rhythm,” Horn said. “I thought that Kirkwood did a nice job of taking things away from us.”

The fourth set featured an early lead by the Eagles, as they tallied eight of the first 11 points. Iowa Central clawed its way back, tying it at 16-all, 20-all and 23-all before taking set-point at 24-23.

Kirkwood, though, received a block from freshman Aubrin Dittmer and a kill by Dittmer to end the match and secure the regional crown for a second consecutive year.

Dittmer had 11 kills on the day with Anna Gorsich adding 14 and Taylor Carey eight. The Eagles were the only league team to defeat Iowa Central this year, scoring a five-set victory during the regular season in Cedar Rapids.

“They were an incredible group of players that came from all different parts of the country and from diverse backgrounds,” Horn said. “They came together and really bonded as a team. This was one of the most successful two-year runs in Iowa Central history and they were a big part of it all.”

Finley and Anderson were both named to the all-region tournament team for their efforts.