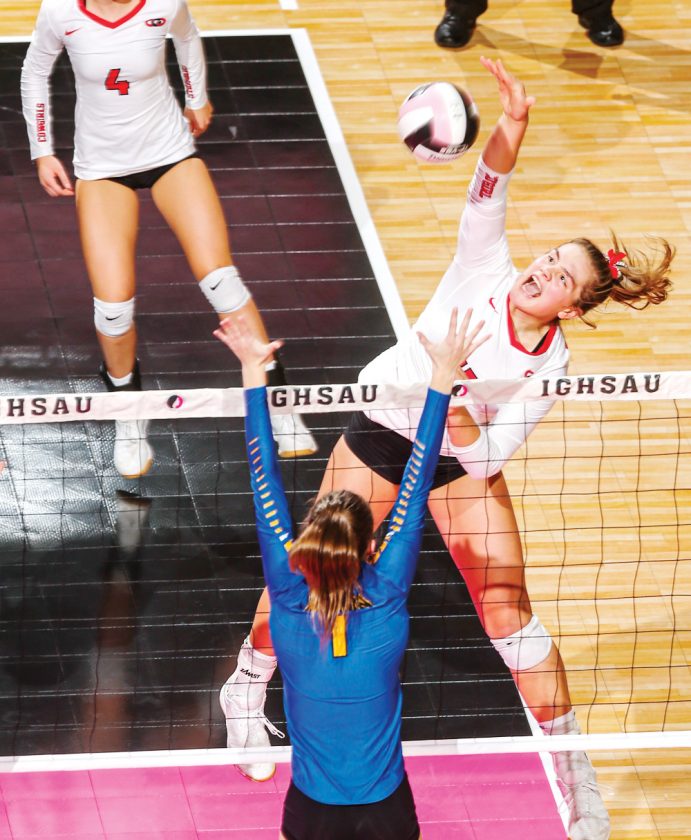 Photo by Andy Abeyta, The Gazette Morgan Middleton of Clarion-Goldfield/Dows was named a first team Class 2A all-state choice in volleyball on Monday.

Morgan Middleton put together one of the more dominant seasons of volleyball in Clarion-Goldfield/Dows school history this year.

Middleton, a junior, earned first team all-state honors by the Iowa Girls Coaches Association for her efforts on the court.

Joining Middleton was her Cowgirl classmate Alaina Freisleben, who was honorable mention in Class 2A.

“It is nice for the girls to be recognized for the hard work and dedication they have had to the CGD program,” head coach Katrina TerHark said. “It is a great representation for our team, school, community, and the North Central Conference. The success stems from the work they have put in during the season and the offseason.

“They’ve bought into the programs’ expectations and values. A tweet by Chris Fitzgerald says it best: ‘At the end of the day, it’s a bunch of kids playing a game they love with their friends.’ The genuine excitement they show for each is truly special.”

Humboldt’s Jori Hajek made the 3A honorable mention squad, with Newell-Fonda’s Ella Larsen earning a spot on the 1A third-team.

Middleton finished the season fourth in the state with 577 kills despite playing in less sets than all but one of the Top-20 ranked players.

The North Dakota State commit also had the second-fewest errors of the Top-15 players, serving at a 94-percent clip with 54 aces.

Middleton, the NCC career leader in kills, also had 34 total blocks and 190 digs. She set a state tournament single-match record with 34 kills as Clarion-Goldfield/Dows earned its first-ever win at state.

Both will be back along with the rest of the roster from two consecutive state tournament appearances for C-G/D.

“I think this season just motivates this group to want to work even harder than they did this year,” TerHark said. “This team learned from making it to the state tournament last year, and didn’t like how losing felt. There was a lot to take in, but they learned from it. They now know what a first round win is like and how to respond after winning a match like that.

“Moving forward, we will continue to set short- and long-term goals and will push ourselves to be the best that we can be. There is a lot of excitement in the CGD community about volleyball and we just need to keep everything in perspective and enjoy the great season we had.”

“Making the all-state team was quite a surprise for me,” said Larsen, who is also an all-state softball player. “I wasn’t thinking a whole lot about making it. I’m just really thankful for my team and everything they have done to make me a better person and player.

“I couldn’t have done it without my teammates and the support of my coaches.”

The all-district teams were also announced, with all four all-state players earning spots on those squads as well.

Algona’s Abbey Holmes and Molly McCauley were also joined by Humboldt’s Deni McDaniel in 3A, with Webster City’s Alayna Finucan earning 4A status.

TerHark was named a coach of the year in 2A.