Flattery works her way back from injury in time for softball 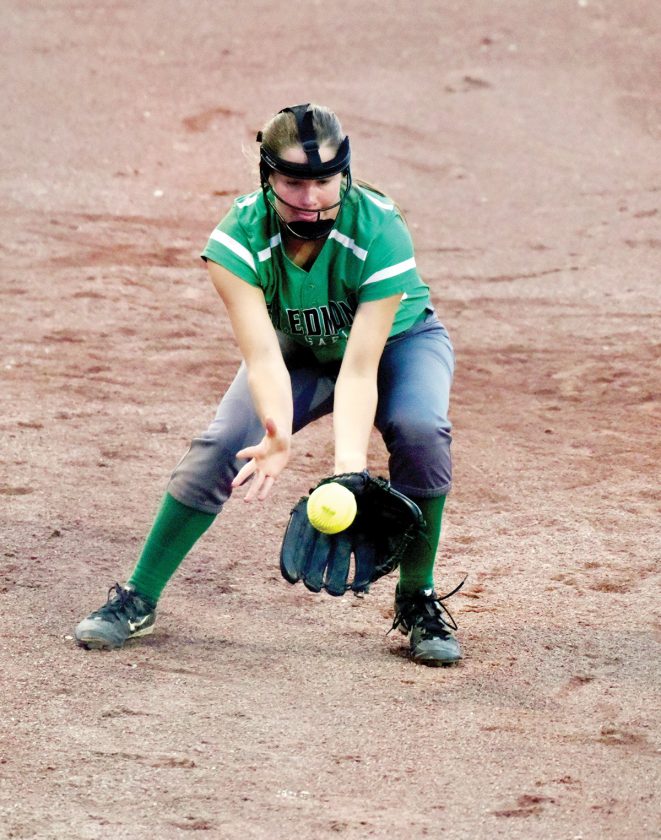 Erin Flattery just finished up the most agonizing sport season of her St. Edmond career.

Flattery, who has been involved in either volleyball, cross country, basketball or softball throughout the year, was forced to miss her senior track season due to a knee injury.

“Not being able to run for my final season of track was more difficult than the running itself,” she said. “It was something that I learned to deal with one day at a time. To put it in perspective, I felt like an ostrich that just wanted to be able to fly like all the other birds. At the beginning of the year, I had set numerous goals for myself to accomplish during this track season, one being to qualify for Drake in long jump.

“It’s one thing to fall short of your goals, but it’s another thing to not even get the chance to try and that’s something I’ve never experienced before. There are a lot of things I took for granted and I wish I would have taken the saying ‘run every race like it’s your last’ a little more seriously. Luckily for me, however, I had an awesome group of people to cheer for all season long and that definitely helped ease the pain.”

The injury occurred in the final basketball game this past winter, and Flattery has made sure to be ready for one last go-round as a Gael on the softball diamond this summer.

“I am so incredibly lucky that my knee injury didn’t take softball away from me too, because I don’t know if I would have the strength left in me to sit out another season,” she said. “The thought of getting to put the Gael uniform on again makes me giddy. This season has the potential to be something very special.

“The fact that we have already overcome so much as a team before the season has even begun says so much about what this year could entail. I’ll be sure to take nothing for granted this time around and play every game like it’s my last.”

She also had 630 career points and 531 rebounds over four years of playing for St. Edmond on the basketball court.

“Getting the opportunity to play sports for the Gaels will always be something that I will hold dear to my heart,” Flattery said. “I can only hope that my contributions were enough to make St. Edmond proud.

“I hope I can be remembered as the girl who may not have been the best at everything but truly loved everything she did.”

Flattery, who will attend Iowa Central in the fall, was also involved in concert choir, show choir, student council, was student body vice president and part of the “Play Like A Champion” committee.

People I would like to have dinner with: Jesus Christ, Abraham Lincoln, Gordon Ramsey (he would make dinner for us).

It would surprise people that I: like to doodle.

I can’t go a day without: my watch.

What are you listening to right now? The “Rudy” soundtrack.

Movie: The Sound of Music.