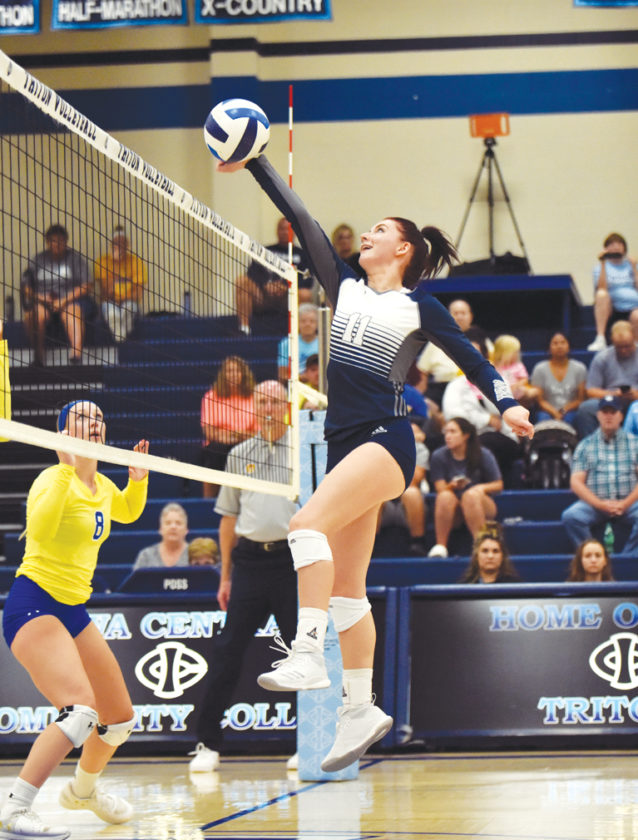 Size and skill will take you far in the game of volleyball, but there is one other trait Iowa Central head coach Sara Horn is glad to have in her team this season.

The Tritons scored a convincing sweep over Iowa Lakes here Wednesday night inside Hodges Fieldhouse in their home opener, 25-12, 25-16 and 25-15.

“We just have so much experience,” Horn said. “It’s a huge advantage to have this many sophomores who played last year back. They knew what to expect and how to handle playing at home in front of a large crowd.”

Freshman Amaya Finley led the way for Iowa Central (6-0 overall, 1-0 in ICCAC) with 12 kills, with Libby Zorn adding nine and Asarar Gony eight. Zorn and Gony are both part of that returning nucleus that helped lead the Tritons to the national tournament and a 10th place finish a season ago.

“That was the best I have seen Abby play all season,” Horn said. “She mixed the ball around and really took advantage of our five hitters.”

The Tritons relied heavily on Gabby Sullivan a year ago, but have worked to fill her void with a group effort. Six different players registered at least one kills in the match vs. the Lakers (3-5, 0-1).

“We knew even last year that we were going to be a more balanced team,” Horn said. “We have that in both the front and back courts.

“Overall, I thought we played a real solid game.”

Iowa Lakes was led by former South Central Calhoun standout Hannah Seil, Krishonna Jones and Janya Johnson, who all had three kills each.

Seil, a freshman, gave the Lakers a 10-9 lead in the third with a kill, adding another two points later. Iowa Lakes went 5-33 last year under head coach Hunter Porter, including 0-8 in the conference.

“Iowa Lakes is a much improved team from last year,” Horn said. “Hunter put together a strong recruiting class and we knew from watching film that we could not overlook them.

“I thought the girls came out and played like we’ve seen all year: that they are a focused, experienced group.”

Karolayne Santos had five kills, with both Lohrmann and Kayla Faldet each picking up four. Kryssie Okinana had seven digs.

Iowa Central’s Sydney Oliver closed out the match by serving the final nine points as the Tritons went on a 10-0 run.

Next action for Iowa Central will be Friday when they head to the Highland Tournament in Kansas and face Coffeyville and Highland.