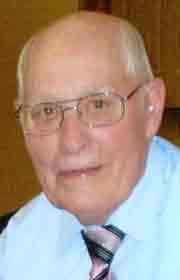 A service honoring Claude’s life will be at 2:00 p.m. Mon­day, May 21, St. Paul Lutheran Church with the Rev. Allen Henderson officiating. Interment will follow in Memorial Park Cemetery. Military honors will be presented by V.F.W. Post No. 1856 and the United States Navy Honor Guard. Visitation is 12:30 p.m. to 2:00 p.m. Monday at the church. Memorials may be directed to St. Paul Lutheran Church. Arrangements have been entrusted to Gunderson Funeral Home & Cremation Services.

Claude enjoyed music and loved playing his guitar, especially when he played with his small band. He enjoyed horses and horse related activities. He was a former member of the Fort Dodge Dragoons Calvary Division. Claude also enjoyed traveling after his retirement.