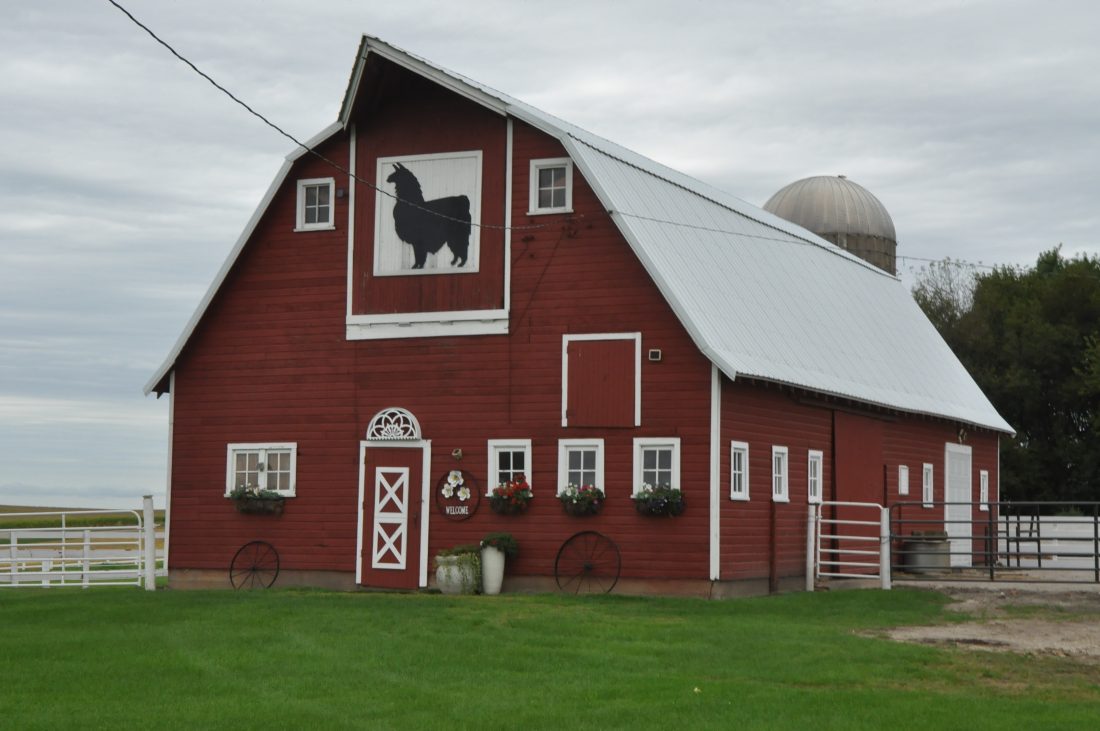 -Messenger photo by Anesa McGregor
THE RED LLAMA BARN located south of Ringsted in Emmet County stands as a testament to what it means to take care of the old barn. Looking at the barn, it is hard to believe it was built almost 70 years ago. In its day the barn housed the normal farm animals such as pigs and cattle. Today, the Red Llama Barn is home to Roxanne Christensen’s show llamas.

RINGSTED — The Red Llama Barn, as it is fondly called, is located in rural Emmet County about two miles south of Ringsted on 550th Avenue. The barn sits on a quaint little acreage and is the focal point of the site.

“I love my barn,” Roxanne Christensen said. Christensen lives on the acreage with her llamas and dog.

The barn is as important today as it was 70 years ago.

Jerome Henricksen and his wife Amelia moved to the farm in 1942. They grew crops but had no place to raise animals that would shelter them in the elements. Henricksen contracted a local carpenter from Ringsted, Mr. Ostegaard, to build a barn. The barn was believed to have been built around 1950 through the efforts of Ostegaard, Henricksen, and the helping hands of many friends and neighbors.

It has stood proudly for almost 70 years as a home for many different animals.

Henricksen milked cows in the barn and other farm animals called it home for many years.

Henricksen and his wife had two boys that grew up calling the farm home. When they had grown and moved away, Jerome retired from farming and moved into town. He rented the farm to Jerry and Roxanne Christensen before eventually selling it to them.

Jerry and Roxanne Christensen kept the tradition of the farm barn alive when they began renting the farm from Henricksen. They continued to use the barn to house hogs and cattle and eventually llamas, which is where the barn gets its name.

Jerry and Roxanne raised their boys on the farm until they were grown. Around this time, the Christensens would go to some of the local fairs in the area and this is where Roxanne fell in love with llamas. Eventually, they purchased their first llama and the rest is, as they say, history. Grazing pens were constructed out of white rail fencing and the pens are the first things that catch your eye and you then follow them to the barn.

For the last 24 years, the red barn has housed Roxanne’s show llamas.

Roxanne and a friend of hers have been showing llamas at county fairs for many years and she has about a dozen llamas currently that have different coat textures, which are used to produce different fabrics.

“I use to take the wool to my mom and she made me a bunch of scarves out of the llama wool,” Christensen said. “Now that she is gone, I’ve been giving it to other people

“My friend and I, we load the llamas and take off for a fair,” she said. “We have a really good time.”

Christensen wasn’t so sure what the llamas thought of the experience.

“They are fairly tolerant of the rid and the noise associated with a fair,” she said. “They are not the happiest animals when it comes to getting a bath, blowout, and their wool trimmed to get ready for a show.

“If they are going to spit at you, this will be the time,” she said. “It’s getting harder and harder to show my llamas and I do miss it.”

The unique silhouette on the haymow door was made by a neighbor of Christensen’s and is made out of a 1-inch piece of solid steel, which was not easy to hang with only a couple of people.

Also unique to the barn is the flower boxes on the front windows that are planted every year.

The Red Llama Barn has had other uses in the past. It has been hosted a live Nativity several times during the Christmas season.

“These old barns are a dying landscape picture of history,” Christensen said. “Keeping the old barn painted and in good repair is very important to its continued longevity. I love my old barn.”