Cook, Tyre ease transitions by dealing with all the ‘stuff’

-Messenger photo by Chad Thompson
April Tyre, co-owner of Helping Hands Estate and Tag Sales, right, smiles as she looks over some items for sale at a client’s home.

-Messenger photo by Chad Thompson
A trinket from Rich’s Skelly Service is on display at one of the estate sales by Helping Hands.

-Messenger photo by Chad Thompson
A variety of necklaces are sold by Helping Hands Estate and Tag sales. 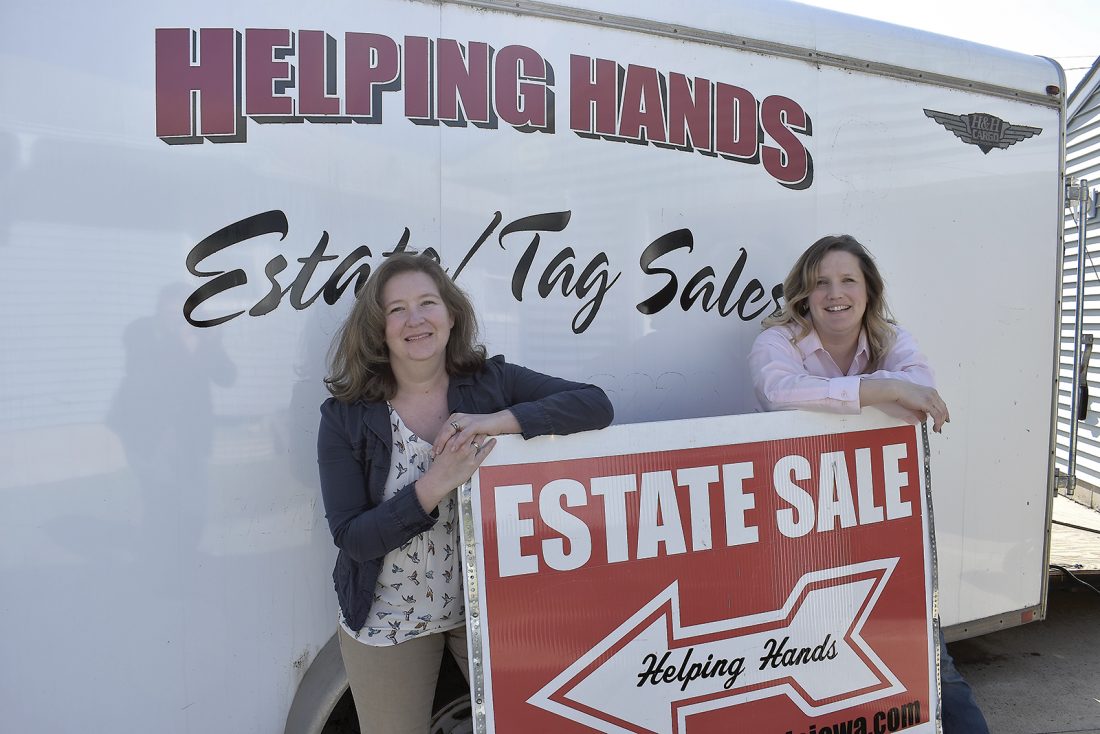 When Melissa Cook and April Tyre went through Margie Loomis’s Fort Dodge estate in the fall of 2018, they soon discovered artwork with a local connection.

“There was a lot of cool, interesting Fort Dodge stuff related to Edna Hogan,” said Cook, who co-owns Helping Hands Estate and Tag Sales. “Original artwork and cards she had written on for people.”

Loomis was a relative of Hogan’s, whose artwork has been celebrated in exhibits at Blanden Memorial Art Museum. Hogan, born in the 1880s, painted well into her 90s, according to Tyre, co-owner of Helping Hands.

“Edna would send people or draw people a picture and send it in the mail to people,” Tyre said. “We found some of that.”

Tyre added, “She was very well-known in this area.” 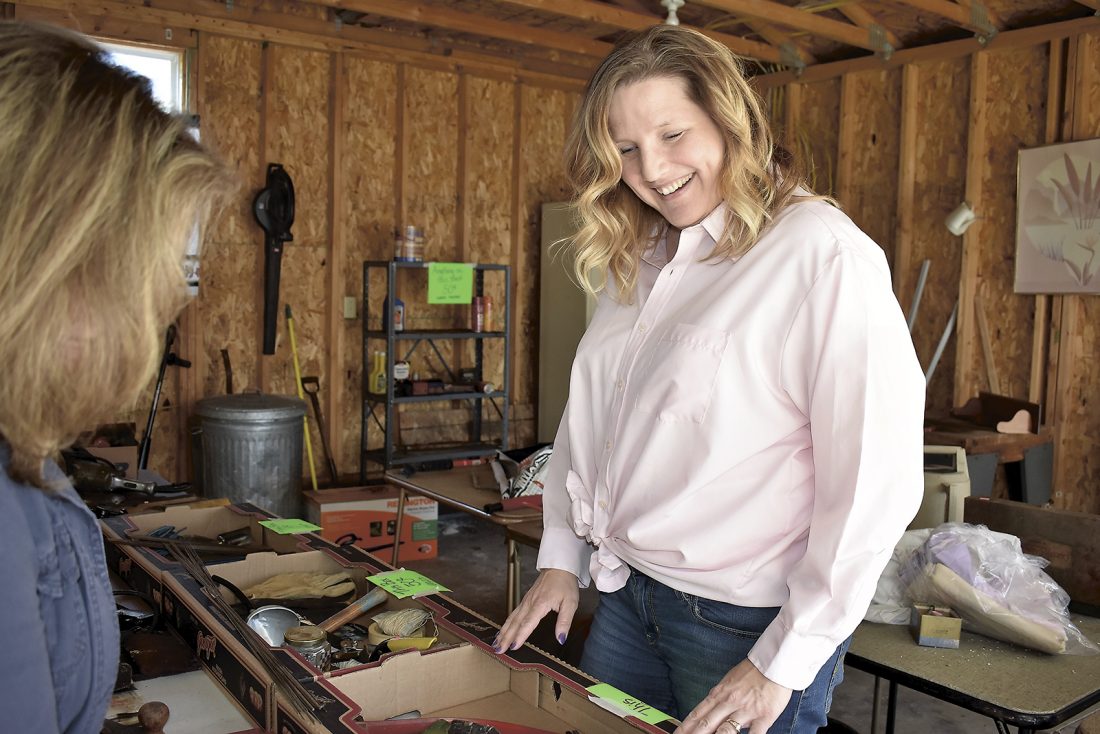 -Messenger photo by Chad Thompson
April Tyre, co-owner of Helping Hands Estate and Tag Sales, right, smiles as she looks over some items for sale at a client’s home.

Some of Hogan’s artwork is with the Blanden and some of it was sold to collectors.

Tyre has learned a lot about local history by going through various collections and talking to experts.

“After we did that sale (Loomis), there was at least one other house that we found an Edna Hogan picture and had we not done Margie’s, I don’t think either one of us would have thought about it or known about what we had,” Tyre said. “It’s a learning process in this job.”

Through Helping Hands, Cook and Tyre have uncovered artwork, found lost rings and stumbled upon relics from bygone local businesses.

The pair helps people by sorting through and selling items that otherwise would be very time consuming for the client. Sometimes that means helping someone go through a loved one’s home or it could be someone downsizing and moving into a smaller home. 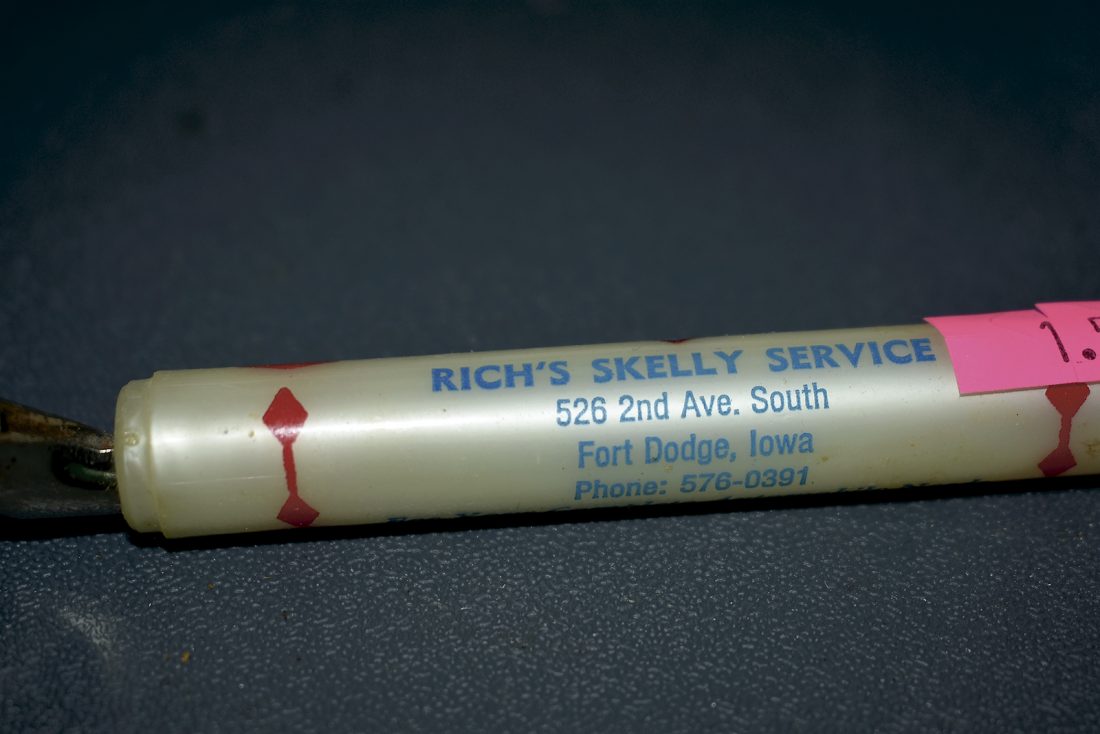 -Messenger photo by Chad Thompson
A trinket from Rich’s Skelly Service is on display at one of the estate sales by Helping Hands.

“Usually we are contacted by the homeowner that might be transitioning to Friendship Haven or the Marian Home or out of state to another home,” Cook said. “The other way we are contacted is for a family member who is deceased.”

Cook and Tyre sort the items, price them and sell them.

“We set it up like a giant classy garage sale,” Cook said.

As many as 200 people or more might walk through a three-day sale, Cook said.

“People come in, April and I sit at the front desk with our calculators and cash box,” Cook said. “People come in and shop and take home what they want to buy.” 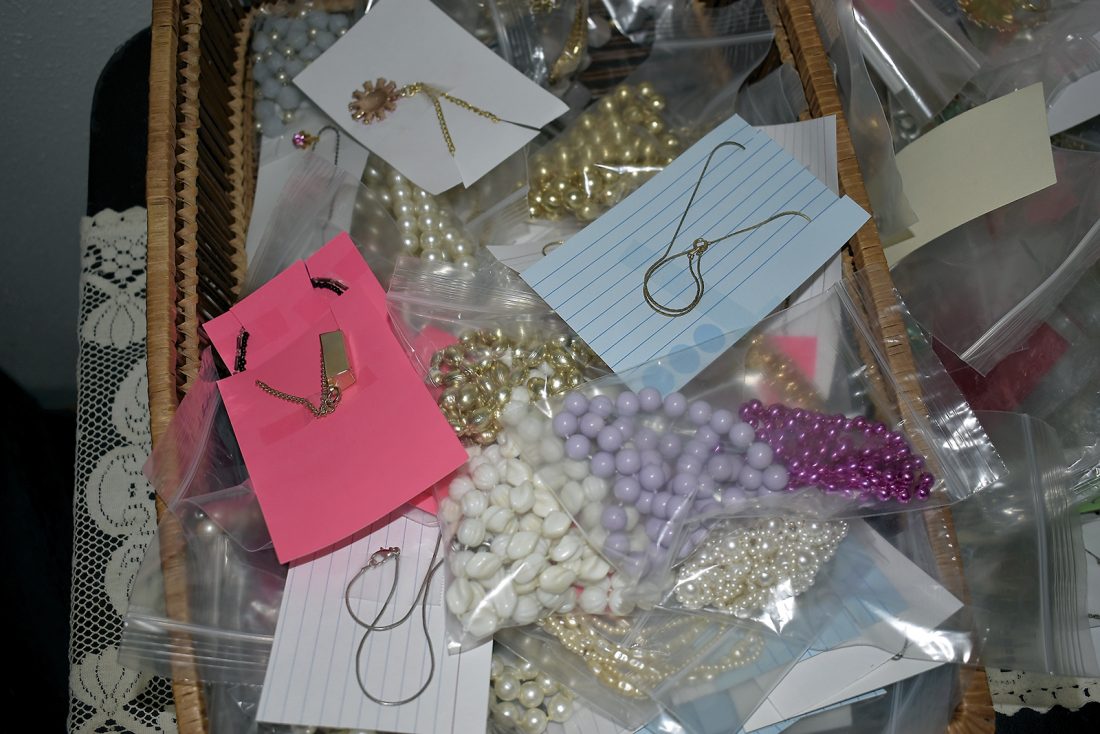 -Messenger photo by Chad Thompson
A variety of necklaces are sold by Helping Hands Estate and Tag sales.

The contracts set up with clients have either a flat fee or a percentage fee.

A majority of the time, Cook and Tyre require a 37.5% commission.

The entire process can take three weeks to a month. The sale itself usually lasts between two and three days.

“Once we start, we usually tell the estate or the family that it takes about three weeks to go into the house,” Cook said. “To go through the drawers, cupboards, garage, get it pictured and listed and hold the actual sale and then clean up.”

Cook added, “Sometimes when we go into a house where someone who has lived there for 40 years and never moved can take six weeks. You don’t want to miss anything.”

Helping Hands was founded by Linda Dencklau, Mary Moore and Linda Cloud. Cook and Tyre bought it in January 2014.

Cook and Tyre like making people’s transitions in life easier.

“I like helping people who have no idea what to do with their stuff,” Tyre said. “It can be so overwhelming or so hard to go through that stuff — to be able to come in and say you don’t have to worry about it anymore, we will get it done and afterwards you can tell there’s this huge weight that’s gone. They don’t have to worry about where to take this or who can use this. That’s one of the best things is helping people who have no idea. Some people have kids who live halfway across the country and can’t keep coming back and forth to get a house emptied out.”

Helping Hands will usually hold between 10 and 15 sales a year. Their most recent sale went virtual after COVID-19 brought public gatherings to a halt.

“We had just started a sale — processing a sale, which means we just drove our trailer over to the house and it was the first or second week of March,” Cook said. “It (virus) was kind of on the radar, but then within the span of two or three weeks as we got closer to having the sale we (decided to hold off).

“So we have been running it as a virtual sale and letting people, one by one, go in and shop,” Cook said.

That’s made it more difficult to sell everything.

“It’s really hard to get rid of some of that little stuff because people can’t come in and see everything,” Cook said.

Cook and Tyre are both stay-at-home mothers. And with their children home from school, they are slowing up for now with Helping Hands.

They are hoping the COVID-19 pandemic ends soon.

“If people call we will work it out as a virtual sale, but we have slowed down anyways,” Cook said.

In the meantime, Cook and Tyre said they miss seeing their regular customers.

“I like being able to see the estate and help the family transition, help them move forward how they want to move forward,” Cook said. “But then also when it comes to sale time, we get some regular customers. To me, I appreciate that the stuff isn’t just thrown away, it’s reloved. We have ladies from churches who come in to buy sheets to make quilts. People come in and get the towels and take them to Almost Home.”

Tyre added, “I like the people we meet, the people we work for and people we empty the houses for, but I also like the people who come to the sales. You meet a lot of people, but you get to know a lot of them as well. Every sale you learn something, you either find something that you have no idea what it is and you end up learning what it is. That’s the other thing — you gain an interesting wealth of knowledge through other people.”

April Johnson Tyre is a lifelong Fort Dodger. She graduated from Fort Dodge Senior High in 1994 and from Northwestern College in Orange City in 1998 with a bachelor’s degree in biology.

Melissa Taylor Cook graduated from Valley High School in West Des Moines in 1997. She has a bachelor’s degree in biochemistry from Iowa State University.

Tyre and Cook met through MOPS, a mom group.