-Messenger photo by Chad Thompson
Kyle Johnson, owner of Johnson Bro’s Snow and Mow, stands next to one of his plow trucks. Johnson’s business has experienced growth every year since 2017. 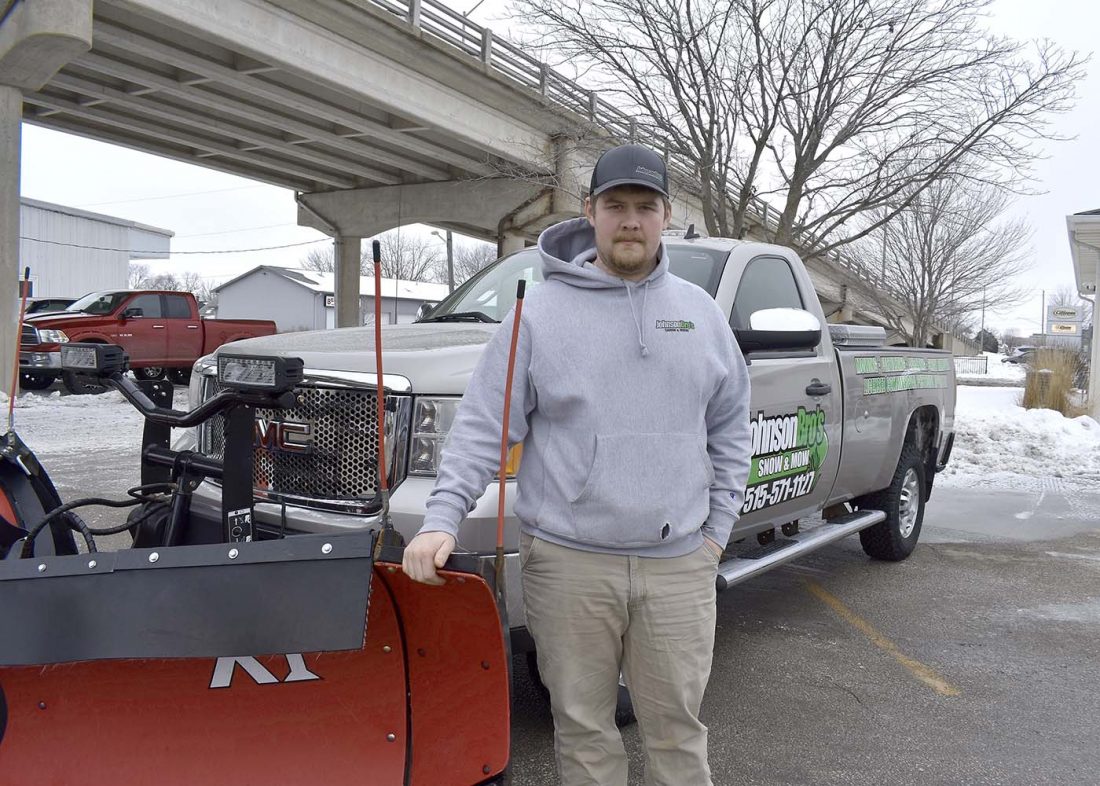 -Messenger photo by Chad Thompson
Kyle Johnson, owner of Johnson Bro’s Snow and Mow, stands next to one of his plow trucks. Johnson’s business has experienced growth every year since 2017.

When Fort Dodge was hammered by a strong snowstorm last February, Kyle Johnson and his crew spent hours on end trying to dig out residents and businesses.

“We plowed for 60 hours straight, no stopping,” said Johnson, owner of Johnson Bro’s Snow and Mow. “It was like 13 inches (of snow). And the wind blew and blew.”

“It was so draining,” Johnson recalled. “The one day I was sitting in the Aldi parking lot and the wind was just whipping. I think we plowed that lot five or six times between the three days. Once in the morning and once at night, just to keep them open.”

Johnson said most of the time when the snow comes down, he’s ready to attack it. But that particular storm tested him. 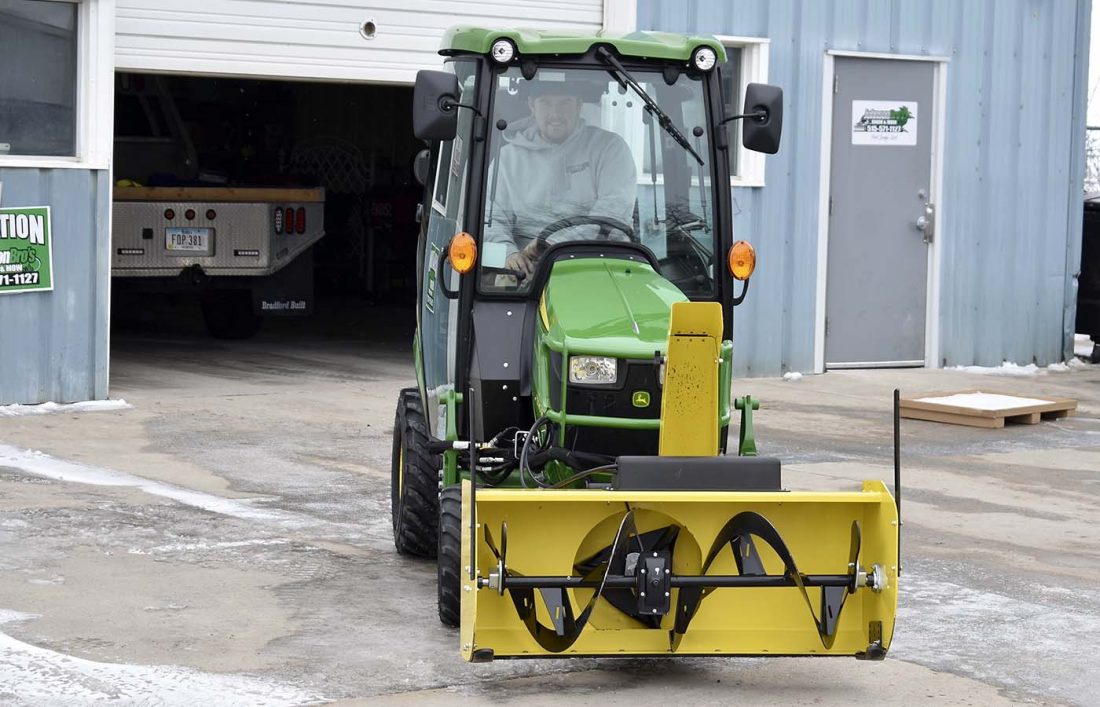 “I kind of got caught with the tail between my legs,” Johnson said. “I think I had 20 hours alone walking behind a snow blower, blowing snow.”

At one point, he felt overwhelmed.

“It was brutal,” Johnson said. “I pulled over and cried.”

Eventually, Johnson pushed through with the help of his crew to complete the work.

And Johnson’s work has paid off.

In each of the last three years, his business has experienced growth.

Johnson started his business with the foundation of lawn work, which includes mowing and fertilizing.

But the snow removal portion of the business keeps things afloat.

“I bought the sprayer and got my first account, working from a garage, trying to make it work,” Johnson said. “I came home, typed up this flyer, started knocking door-to-door and by the end of the week I had 40 accounts. I got most of the people I mowed for to go to me for snow. It took a big leap for them to switch and come to me.”

Johnson said by the end of the year he had about 70 accounts.

“Everything has gone up in the last few years,” Johnson said.

And with a little experience and profit, Johnson has opted to work a little smarter instead of harder with the purchase of a John Deere tractor.

The tractor, he said, can do the work of about five or six guys on the sidewalks.

“The tractor saves us so much,” he said. “That’s kind of been my saving grace.”

Johnson added, “I think I’m ready this year. I don’t have as much fear. I feel like I’ve got the equipment.”

Johnson is also planning an expansion into a new shop.

He will be moving his operations from 27 S 21st St. to a shop adjacent to Woodruff Construction along U.S. Highway 169.

That move is expected to take place anytime.

His new shop space is about 8,400 square feet compared to his current space, which occupies about 1,600 square feet.

“Before this I was in a little shop and before that a storage shed,” Johnson said. “It has grown pretty substantially in three years.”

Johnson has been working in yards since he was a youngster growing up near Feelhaver Elementary School.

“I have done it since I was a kid,” Johnson said. ” I did it through high school. I had enough yards to keep me busy.”

As a teenager, Johnson and his brother, Cole, worked together mowing grass and shoveling snow.

“We made up some T-shirts called Johnson Bro’s Snow and Mow,” Johnson said. “It was just us two, making money when we could.”

As the two grew older, Kyle Johnson took a lead role with the business. His brother helps when he can and may someday take on a larger role, Kyle Johnson said.

He works with three others in the summer. In the winter time he might have as many as 12 part-time workers.

Johnson’s father, Anthony Johnson, will help when needed, too.

“Snow really sucks,” he said. “It’s not the funnest thing to do. But if you see a guy show up at 2 a.m. to plow snow, they would be a good candidate for summer work. I would like to have five full-time guys.”

Jake Schmidt is one of the full-time employees for Johnson Bro’s. Johnson said Schmidt has proven his reliability.

Johnson holds a business degree from Iowa Central Community College. At one point he planned to attend Iowa State University, but opted to keep his business growing.

“I kept picking up more accounts and I didn’t want to walk away from those accounts,” Johnson said. “So I shut down my plans for Iowa State.”

Johnson said this winter has a chance to be as profitable as last year’s.

“If February can keep up with the way January was, I think it will be a better year than previous,” Johnson said.

One drawback to the business is being dependent on winter weather.

Snow makes up between 20 to 25 percent of Johnson’s business, he said.

“It usually averages out and bounces back,” Johnson said. “But it’s very unpredictable. My biggest fear to go backward. Going forward is cool, but going backwards is scary. Snow removal is a big chunk of what I do and if it doesn’t snow, that’s a main factor. If we have a year that’s completely dry with no snow, I’ve got to have my own savings account to get through the winter. This year I have been fortunate that I haven’t had to go get a part-time job to make ends meet.”

Johnson said with his new shop, he may look to do more work in surrounding cities like Manson and Humboldt.

“We would like to show people in that vicinity who we are and what we are about,” Johnson said.