-Messenger photo by Chad Thompson Joline Reyes, owner of New 2 You Second Hand Store, shows off one of the shirts for sale at the store.

-Messenger photo by Chad Thompson
Betty Linderman, left, and her mother, Joline Reyes, hold some of the shirts available for purchase inside the New 2 You Second Hand Store.

-Messenger photo by Chad Thompson
Jolene Reyes, owner of New 2 You Second Hand Store, places a toy on the shelf at the newly opened business along Central Avenue. 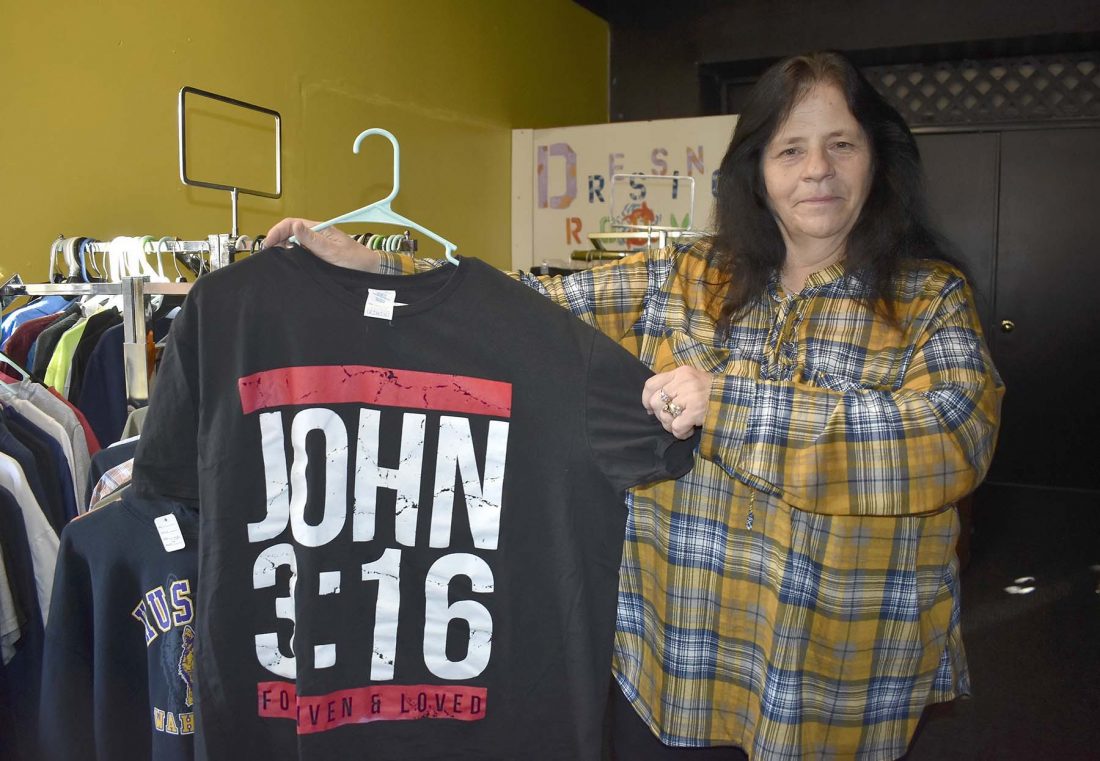 -Messenger photo by Chad Thompson Joline Reyes, owner of New 2 You Second Hand Store, shows off one of the shirts for sale at the store.

Joline Reyes has a pretty steady supply chain for the products she sells at New 2 You Second Hand Store.

“I’ve got 22 grandkids,” Reyes said from her newly opened store at 1100 Central Ave. in downtown Fort Dodge. “I get a lot of clothes from the grandkids. When they outgrow them, they give them to grandma.”

In addition to clothing items for all ages, Reyes sells things like jewelry, purses, shoes, baby strollers and some dishes.

New 2 You joins The Key on Central and Second Chance Thrift Store as other second hand stores downtown.

Reyes doesn’t see the competition as a problem. 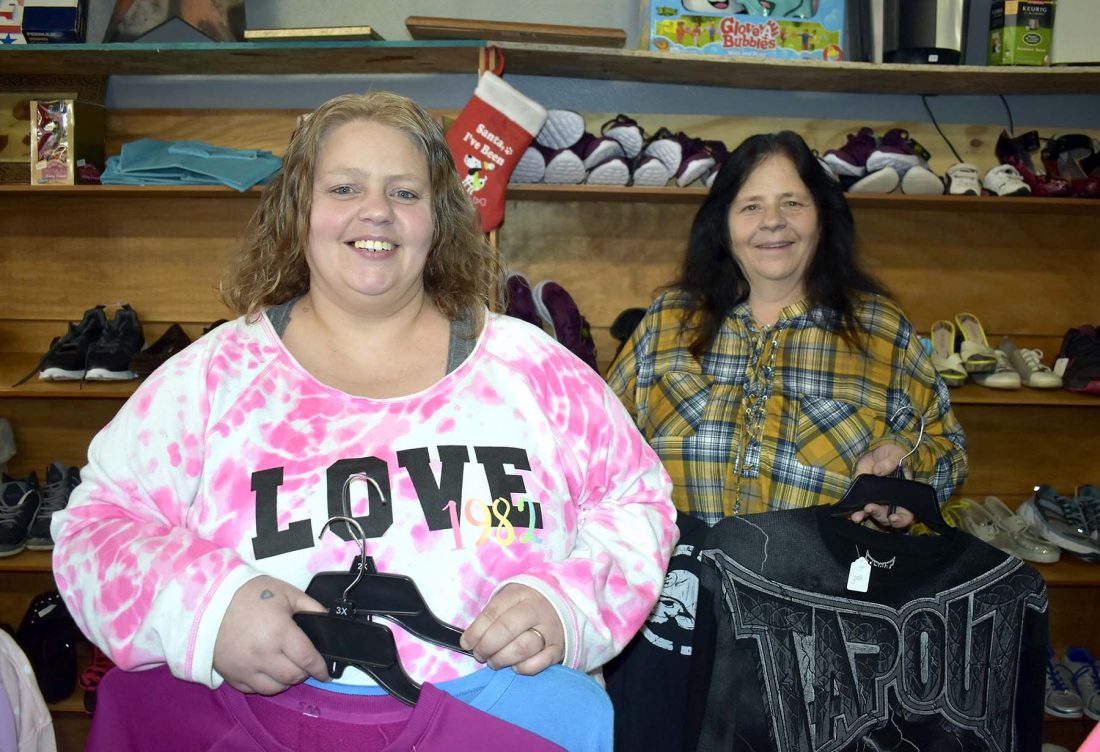 -Messenger photo by Chad Thompson
Betty Linderman, left, and her mother, Joline Reyes, hold some of the shirts available for purchase inside the New 2 You Second Hand Store.

“This way they can walk from one store to the other,” Reyes said. “If we don’t have what they’re looking for, maybe they’ll find it over there.”

“I always collected stuff because I wanted to have a big awesome garage sale,” Reyes said. “I had a dream that I would start a thrift store.”

So throughout the past several years, Reyes bought clothes racks to have for her own garage sales. 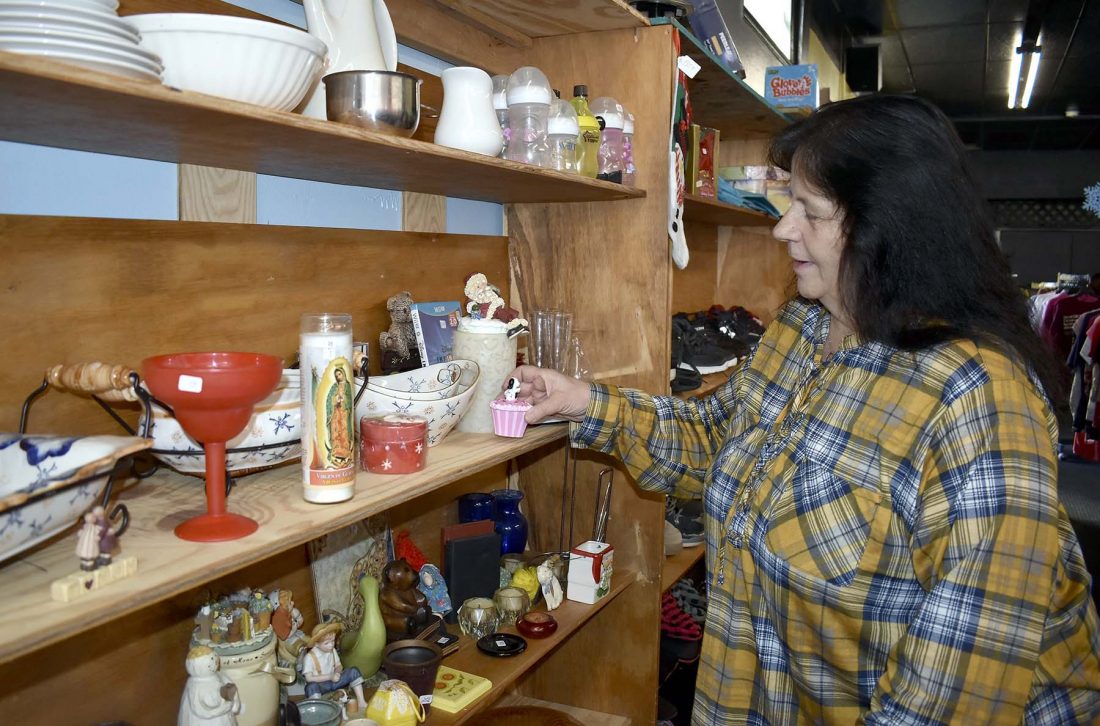 -Messenger photo by Chad Thompson
Jolene Reyes, owner of New 2 You Second Hand Store, places a toy on the shelf at the newly opened business along Central Avenue.

Then the space that used to occupy Muscle Factory came up for rent, said Reyes, who at one time worked at a consignment store in Belmond.

“I thought more about getting my own place,” Reyes said. “I was driving down main street one day and saw a rent sign.”

A short time later, Reyes decided to give it a go.

“My kids encouraged me to do it,” she said. “I was really nervous and excited.”

“She’s here with me every day,” Reyes said.

Reyes has spent most of her life being a mother.

“I went to Ottumwa High School, dropped out in the ninth grade and played mommy,” she said.

She’s lived in Eagle Grove, Goldfield and Fort Dodge, among other places.

Her husband of 14 years was happy when the store opened.

“Before this, I was just hoarding stuff,” Reyes said. “All this stuff was in totes at my house. My husband was so glad when I rented this store. He moved all my stuff up here the next day and never complained.”

In the early stages of her business, Reyes said she’s had quite a few visitors.

Baby clothing and medical scrubs have been top sellers.

But while Reyes aims to turn a profit, she also wants to be helpful to those in need.

“I gave vouchers to the YWCA for ladies and children that need clothing,” Reyes said. “They can come get them for free.”

At the store, Reyes gets frequent visits from family members, who will lend a hand. And when she’s not busy with customers, Reyes will spend time sorting items.

“Even if I already went through the tote, I like going through it again,” Reyes said. “And I take everything home and wash it. I check it all. I don’t want anything ripped or stained. If it is, I throw it away.”

Those who wish, can drop off clothes or other gently used items through the front door of the store, Reyes said.

“I just want the stuff to be clean — no dog hair, cat hair, stink or smell like smoke,” she said.

“I like talking to people and people coming in,” Reyes said. “It’s just fun. Some people get so excited about finding something they’re looking for.”

A grand opening will be held at the store on Dec. 14 from noon to 3 p.m. Santa Claus will give the first 50 children a free gift.