Why is that barn red?

-Messenger photo by Kriss Nelson
The barn that stands on the Jerry and Sarah Zamzow barn has a new red tin exterior. Red barns became popular when oxide was mixed into paint to help protect the wood. This concoction made for a deep-red color. 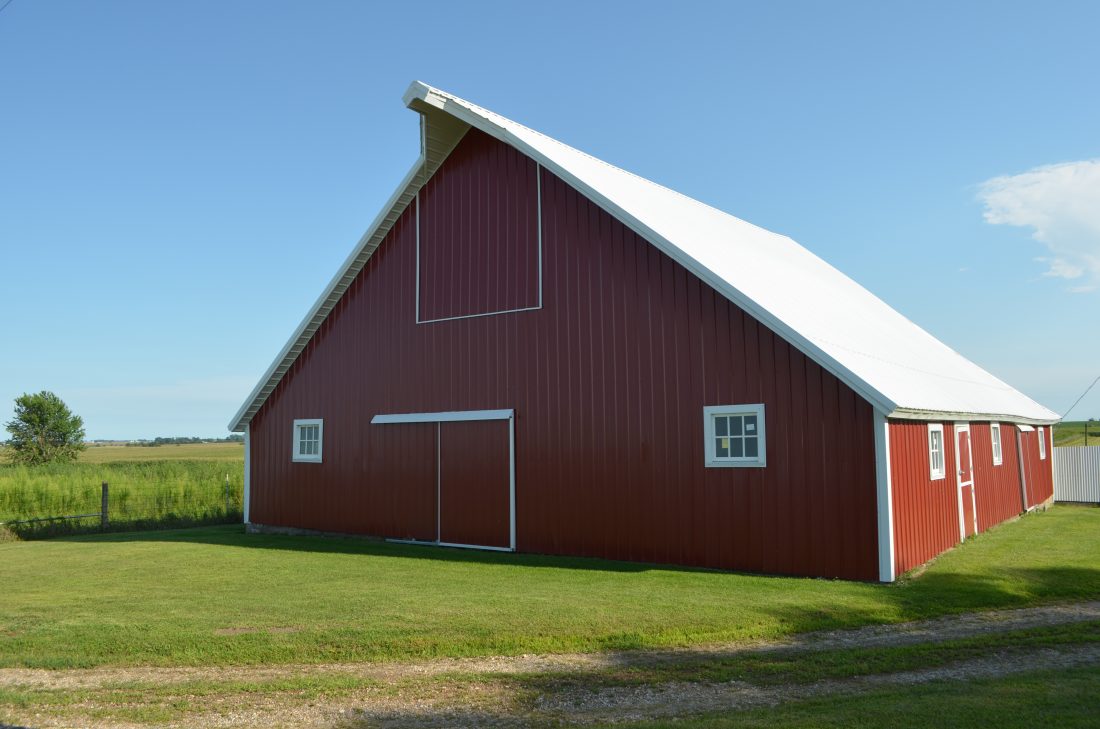 -Messenger photo by Kriss Nelson
The barn that stands on the Jerry and Sarah Zamzow barn has a new red tin exterior. Red barns became popular when oxide was mixed into paint to help protect the wood. This concoction made for a deep-red color.

It’s hard to picture a farm without a barn. Wooden barns remain icons of Iowa agriculture, harboring history from their floors to their haymows. Even though these barns today rarely play an essential role on the farm like they once did, they continue to reflect the agricultural heritage that shaped modern Iowa.

Barns captivate the imagination for a number of reasons, starting with the fact that no two barns are exactly alike. Each was designed to meet the specific needs of the farmer who used it.

One thing held true for every barn, though. It had to be durable to stand the test of time and protect the farm family’s greatest assets. This agricultural building was more important than the farmhouse. Without a way to protect farm animals or store crops, Iowa’s early settlers had few ways to survive.

Many American barns, especially in the nineteenth century into the early twentieth century and beyond, were painted red. The Old Farmer’s Almanac noted that farmers used to make their own paint, usually with a mix of skimmed milk, lime and red iron oxide earth pigments–which had a red tint. This created a plastic-like coating that hardened quickly and lasted for years. Linseed oil was subsequently added to the recipe to help the paint soak into the barn wood.

Mixing the oxide into the paint protected the wood from mold and moss (which caused decay) and also resulted in a deep red color. It so happens that darker colors absorb more of the sun’s rays and kept buildings warmer in the wintertime. Thus, the American “barn red” was born.

In the mid- to late 1800s, paint companies started making barn paint with metallic oxides especially formulated for barn use. The red paints sold at a much lower price per gallon than house paint, hence attracting the ever-so-thrifty farmer, noted the Old Farmer’s Almanac. Red was the color of choice until whitewash became cheaper, at which point white barns began to spring up.

Barns in years past were more about common sense, usefulness and economics and less about style. Depending on when they were built on the Iowa countryside, barns reflected “new and improved” versions, not only in construction materials and building techniques, but in general efficiency.

The oldest barn in Iowa is the Hausbarn, which was relocated to Manning in 1996. While this structure was never used as a working barn in Iowa, it was built in 1660 in the region of Europe that would become northwest Germany. The Hausbarn originally had living quarters (including bedrooms, sitting areas, dining and cooking areas) for the family, and rooms for housing livestock, farm equipment and feed. Everything was housed under one thatched roof.

Other barns built in Iowa reflect the different architectural styles that defined Midwestern construction through the years. Some of the oldest barns in Iowa are bank barns, built into the side of a gently sloping hill. The basement was accessible from the lower level, while the main floor could be accessed from the upper level.

Roof designs can also offer clues about the age of a barn. Gable-roof barns are one of the oldest barn designs. The high pitch of a gable roof was durable and helped rain water run off faster. High-pitched gable roofs also promoted natural ventilation. Warm air would rise to the peak of the barn and escape through cupolas. This pulled cooler air into the barn, creating a cycle that allowed for a continuous supply of fresh air.

Gambrel roofs became popular on barns by the late 19th century. The gambrel roof has a shallow pitch at the peak and a steeper pitch at the eaves. Using two different slopes on each side of the roof maximized internal storage space while still taking advantage of the sloped roof’s ability to shed water and snow.

Technology advances influenced the style of Iowa’s barns around the turn of the twentieth century. Improvements in construction methods in the early 1900s resulted in Gothic-arch trusses made of longer lengths of boards bent into the curved shape. The ability to create curved, laminated rafters allowed the gambrel roof to evolve into the Gothic-arch barn. The arch created a haymow that spanned the entire width of the barn, without any roof supports obstructing use.

Round and polygonal dairy barns, although rare, surged in popularity in the late nineteenth and early twentieth centuries in Iowa and beyond. One of the round barn’s biggest proponents was Franklin Hiram King, an agricultural physics professor at the University of Wisconsin-Madison. In the early 1900s, he promoted the round barn design as being economical, stable and efficient for use as a dairy barn. It was also claimed that round barns withstood wind and weather better.

No matter what style of barn an Iowa farmer desired, there were a variety of ways to build a new barn, from hiring local carpenters to purchasing complete kits from mail-order companies in the early 1900s. Sears, Roebuck and Company, Montgomery Ward and the Gordon Van Tine company of Davenport, Iowa, supplied hundreds of mail-order barns and other farm buildings across the country. Included in the Gordon Van Tine 1909 catalog were two round barns, three gambrel-roof barns, one cross-gable barn, poultry houses, granary, ice house, corn crib, hog house and implement shed.

For generations, the barn remained the most prominent building on Iowa’s farms. Perhaps they are so memorable to so many people because they were the hub of activity on the farm. Daily work revolved around the barn, which delivered a multi-sensory experience of sights, sounds and smells.

As technology evolved and traditional horsepower gave way to mechanical horsepower, barns became obsolete on many farms. More barns continue to disappear from the Iowa landscape each year. Yet something powerful endures. As one barn owner reminisced, you can tear down the barn, but you can’t tear down the memories.