Understanding what it takes to transition to organic 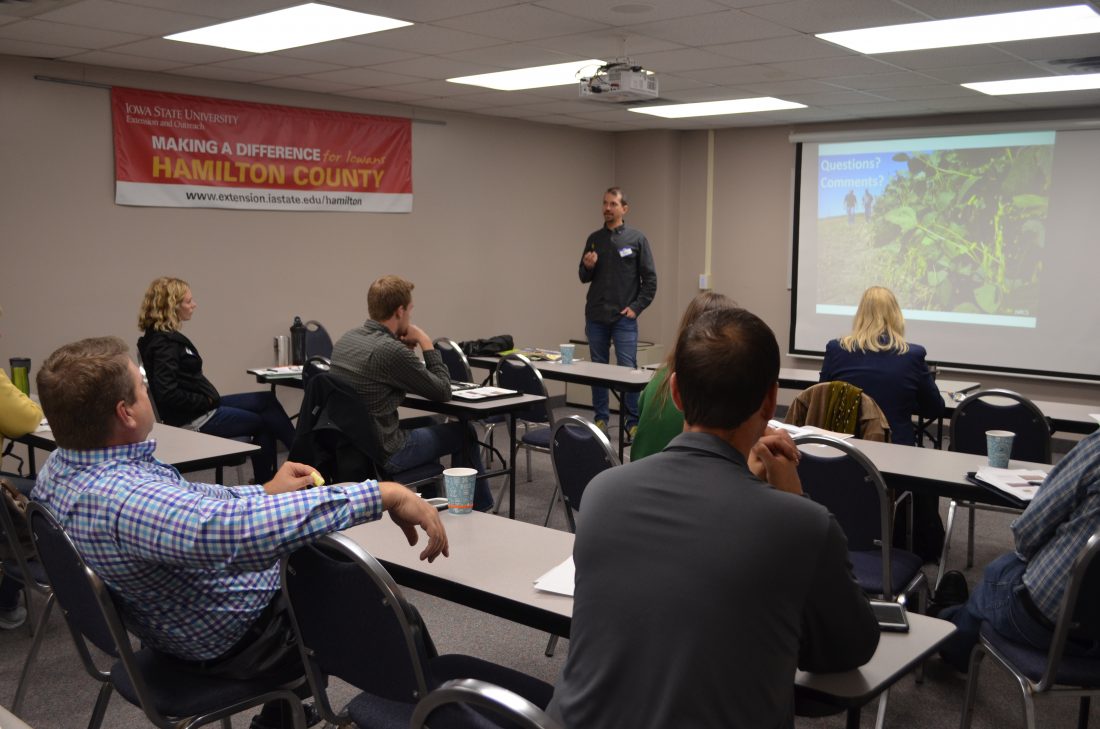 WEBSTER CITY — Is transitioning your conventional acres over to organic production something you have been considering? There is a long list of rules and regulations that need to be followed, but, if done correctly, you could be looking at higher profit margins once you have cleared the three year transition period.

Ben Bowell with Oregon Tilth presented an overview of the regulations and practices that go into organic farming during a “Growing Organic Expertise in Iowa” workshop held at the Hamilton County ISU Extension office earlier this month.

“The rule around the transition to organic is that producers have to, for ground that has been managed as conventional, the last time you applied a prohibited substance – which is something that isn’t allowed in organic– you have to wait three years before you can harvest your first certified organic crop,” said Bowell.

If there is land that hasn’t had any prohibited substances applied to it in the last three years, you are in luck, as that land can be eligible right away.

When it comes to transition acres, Bowell said some producers go all in, whereas others do it gradually.

“In terms of transition, you can go full in and do all of your fields at once, but you don’t have to,” he said. “An organic farmer doesn’t have to have all of their ground be certified organic.”

Depending on your operation, Bowell said a gradual transition can make a lot of sense by helping to offset the challenges associated with organic farming. But making the decision on which ground to begin the transition could be a tough one.

“I do, sometimes, have people say they want to try organic, but pick their least productive fields first to give it a try,” he said. “It definitely is going to be a bigger challenge to manage that field in an organic system – weeds, fertility, and all of those things and so it may not be the fairest indicator on how well things are going to go if you using the least productive ground.”

Another challenge of transitioning acres, Bowell said, is that you have to farm those acres by following all organic practices, but will not be able to receive the premium when you sell your crop until you are certified.

Synthetic substances, Bowell explained, are prohibited for fertility, weed and pest management. Non-synthetic and natural substances are allowed. To find which materials are acceptable for an organic operation, the Organic Material Review Institute has a list on its website.

“You can do a search on there and it will let you know if that material is allowed or not allowed in organic production, or if it’s allowed if there is any restrictions on it,” he said.

Oftentimes, an organic producer will opt to keep farming some of their land conventionally.

“You can have what is called a split operation so you can continually have conventional ground and organic ground on the same operation,” he said. “And, you can even do what is a parallel operation. But, that is if you grow corn conventionally and corn organically. That is OK to do, you just need to ensure they are not co-mingling – that they are not mixing in with each other. You will need to have a buffer even within your own operation there is a buffer requirement. You need to separate organic fields from conventional fields.”

Being in contact with your neighbors, making sure they know which of your acres are either certified or are transitioning into organic, Bowell said, is very important.

“Reach out to them, send them a letter once a year explaining that you are organic and are trying to prevent drift on there,” he said.

Some landowners are making the decision to remove their land from the Conservation Reserve Program (CRP) that has sat idle for several years and are placing it into organic production.

“There’s quite a bit of talk about converting CRP land directly into organic production,” he said. “There are some people in the organic community that are big advocates for that and I think the reason is we have this demand for organic — so that land looks attractive because it is ready in terms of the three year period — it’s ready right away to go into organic production.”

Is it the best idea to convert those CRP acres into organic production?

“I put a note of caution on that,” he said. “Think about why that land was put into CRP to begin with. It might not be the most productive land. You might have some real significant challenges in terms of production on that ground.”

Bowell said there is a requirement for organic producers to have a crop rotation. Regulation says that a producer can’t have the same crops continually without interruption.

A crop rotation has four objectives:

• Provide for pest management in annual and perennial crops.

Bowell said to look beyond one year at a time.

Cover crops are not required in organic production, but Bowell said they can be an important tool and also meet the crop rotation requirement.

“I think cover crops can be a useful tool for weed suppression in organic crop rotations,” he said. “If you plant a cover crop with a significant amount of biomass, and use a roller/crimper to put it down and then plant into this really thick biomass, that would then provide season long weed control and you wouldn’t have to have any cultivation after that.”

This rule requires some level of an integrated pest management approach.

“First you have to take prevention methods,” said Bowell. “Like using a resistant variety. Then you can use mechanical, physical and cultural controls then after those don’t work — you can use some of the allowed inputs,” he said. “And that just makes sense, because inputs are expensive and they’re less expensive than their synthetic counterparts.”

• Augmentation or introduction of predators or parasites of the pest species.

• Development of habitat for natural enemies of pests.

• Nonsynthetic controls such as lures, traps and repellents.

Ways to prevent insect damage can be done, Bowell said through crop rotation, crop health and variety, sanitation and materials.

“There’s not a silver bullet for weed control in organic systems,” said Bowell. “So, think about multiple tools, a whole system approach to it. It is often cited as a top production challenge and I think part of the success here is figuring out a tolerable level of weeds and understanding an economic threshold — when it makes sense to be OK with some weeds in your fields and when you really have to take action on that.”

• Plastic or other synthetic mulches.

“There’s a lot of tools out there for weed control, you just need to find what’s best for your operation,” he said.

Rules that apply for soil fertility and nutrient management include:

• Use rotations, cover crops, and the application of plant and animal materials.

“Focus on the long term for soil fertility — building up the soil to provide nitrogen in the soil for the long term. There isn’t a lot of options for quick release materials. There are some other inputs especially products like blood meals, fish meals and some of these things that have more nitrogen in them and more that is plant available, but they are expensive and they are not commonly used on larger scales. They’re most commonly used on vegetable production of higher value and on a smaller scale,” said Bowell.

“In response to this guidance, a lot of certifiers have changed their organic system plan and their inspection reports to add more questions and more focus to this category of natural resources and biodiversity,” he said. “There’s kind of a newer focus there and making sure that producers are doing something around this category.”