-Messenger photo by Chad Thompson
Jeff Daniel, manager of Daniel Tire, sizes up a tire at the shop. 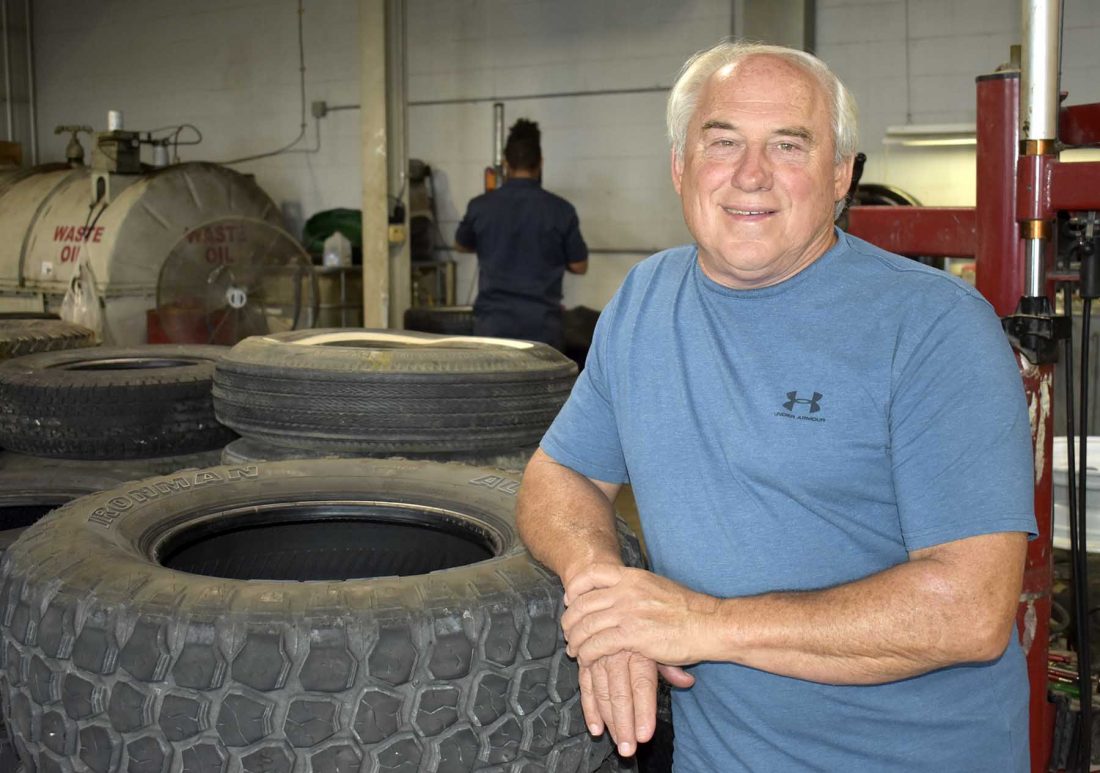 It’s entirely possible that Steve Daniel’s grandfather ended up in Fort Dodge by mistake around the turn of the 20th century.

Daniel’s grandfather, Ferris Daniel, immigrated from Lebanon to the United States in the early 1900s.

“He came in through Ellis Island and went on to Oklahoma City,” said Steve Daniel, owner of Daniel Tire. “And for some reason he wanted to be in Iowa.”

More specifically, Ferris Daniel wanted to get to Alta, perhaps for a business opportunity.

But Steve Daniel said his grandfather didn’t know the English language very well at the time. 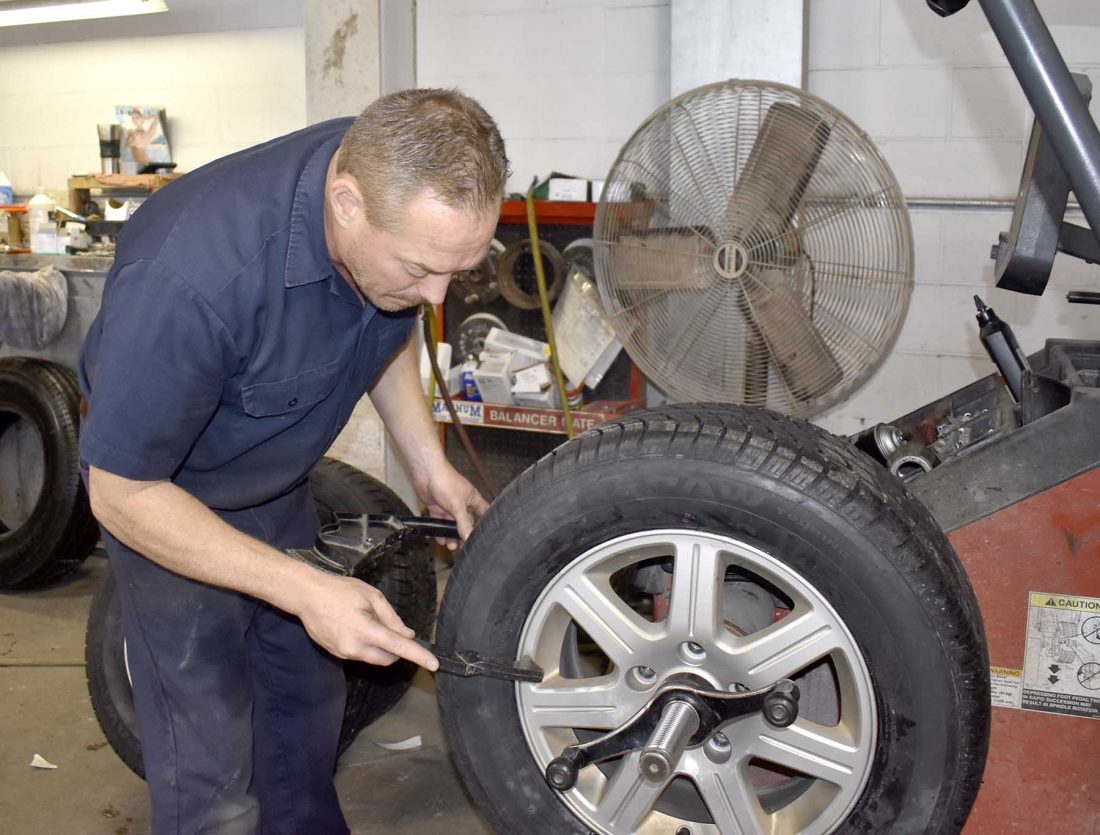 -Messenger photo by Chad Thompson
Jeff Daniel, manager of Daniel Tire, sizes up a tire at the shop.

So somewhere along his journey to the Midwest, one version of the family’s story says that a conductor of a train apparently pointed Ferris Daniel to a train that transported him to Fort Dodge rather than Alta.

“I think there was a little happenstance there,” Daniel said. “A little stroke of luck and whatever it was was, he was able to settle in here.”

“The Lebanese are pretty good at business,” Steve Daniel said. “They just always have been.”

Ferris Daniel sold things like pots, pans and sewing materials off his wagon.

“He went out to the farms and sold stuff,” Steve Daniel said. “That’s how he started. He came in, he didn’t know the language. I still have farmers come in and remember having him spend the night when he was on the road.”

When the fall came, Ferris Daniel would stay put. He sold his goods from a store on South Sixth Street in downtown Fort Dodge, where the DART bus terminal is today.

“He (John) was the oldest of the Daniel boys,” Steve Daniel said. “He wanted to get into the tire business.”

“He convinced them that he could handle the franchise,” Steve Daniel said. “And Daniel Tire was started in earnest in 1926. It was my grandfather and my uncle John.”

That same year, Ferris Daniel stopped going out in his wagon as a salesman.

In the mean time, Ferris Daniel helped other Lebanese immigrants assimilate into the community.

“My grandfather kind of became the king pin of the Lebanese as other families migrated here, and so they would consult with him as to where to live, who to buy from, how to conduct themselves,” Steve Daniel said. “What the rules were here in America.”

On Sundays, Ferris Daniel would offer a church service for Lebanese families at his home at Second Avenue North and 12th Street.

“He would hold the church service and he would be able to recite in both Lebanese and English,” Steve Daniel said. “After the service was over, they would eat and play cards for a while and practice their English.”

Steve Daniel added, “They would tell fairy tales or rhymes in Arabic and try to repeat it in English and that’s how they taught themselves English.”

Alex Daniel and George Daniel went into the service during World War II.

“After those two came home from World War II, it (Daniel Tire) became our family’s living,” Steve Daniel said. “It educated everybody, put everyone through college and clothed them. It’s been a successful business in the community and we have had a good following here for a lot of years.”

Steve Daniel got involved in the family business in the 1970s around the time his uncle George Daniel was set to retire.

“I graduated from college (Bachelor of Science in microbiology from South Dakota State University) and went to work for Land O’Lakes for a couple of years,” Steve Daniel said. “But I always wanted to own my own business. I saw the opportunity when one of my uncles was wanting to retire.”

Steve Daniel’s father, Alex Daniel, was initially opposed to him getting involved.

“I tried to talk my dad to let me purchase his portion, but he wasn’t interested yet and I went to my mother and said you got to help me with this,” Steve Daniel said “And dad didn’t want us in this business. He wanted us in clean jobs, college educated, but this is what I wanted to do. After a few months of relenting, my dad let me purchase my uncle’s half.”

“When I took over, it was easy,” Steve Daniel said. “They had based everything on honesty and integrity and we continue that same idea to give the best service possible at the best price possible.”

Daniel Tire is now into its fourth generation.

“Jeff manages the place now,” Steve Daniel said. “I am semi-retired. Try to take some of the heat off of him.”

Jeff Daniel said he’s able to take on any challenge presented to him.

He’s been running around the shop since he was a child.

Jeff Daniel began working in the shop in 1994.

“I like the camaraderie with fellow employees and for the most part the clientele we work with on a daily basis,” Jeff Daniel said.

He and his father bounce ideas off of each other.

“Jeff and I will consult and talk about things, but for the most part Jeff has a good handle on what’s going on,” Steve Daniel said. “I act more in a support role. We will get a truck of 100 tires in and I’ll help put them away. I do things behind the scenes, but that helps keep my guys and gals up on the front line.”

The business and the building itself has transformed over the course of 93 years.

In 1941, the business moved from Sixth Street to its current location on First Avenue South.

In 2000, the entire building was remodeled.

“We built this to last a long time,” Steve Daniel said. “After 2000, my son Jeff was coming into the business and we needed to decide to manage for extinction or for growth. So we decided to manage it for growth. With him coming in and then he has triplet boys, so there’s another generation of boys that could easily take this place over. “We decided we would gear up.”

At that time, Daniel Tire added mechanics and transitioned into a full-service shop.

Between 40 and 50 cars are serviced each day, according to Steve Daniel.

Ten employees work at Daniel Tire. And all but two have worked there for more than 15 years.

“I am not going to fire them,” Steve Daniel said. “They are too good. Our success is directly related to the quality of people we have.”

Although Steve Daniel’s role in the business has diminished, he doesn’t anticipate fully retiring anytime soon.

“I’ll probably die with my boots on,” he said. “So long as I have the health and feel like that I’m adding something to this place, I am not the kind of guy that wants to go away for the winter. I enjoy winter, still. I might want to travel for a few weeks and take a few trips to get a way for a while. But I still enjoy working. I am not sure they all enjoy seeing me come every day. But so long as they are willing to put up with me, I’ll sit in the corner and growl — like an old man is supposed to do.”

Two FD streets to be closed