-Messenger photo by Chad Thompson
Maddie Lind, owner of Creative Signs and Graphics, left, shares a laugh with her husband, Zach Lind, of Fort Dodge, as they each hold up a sign they made. 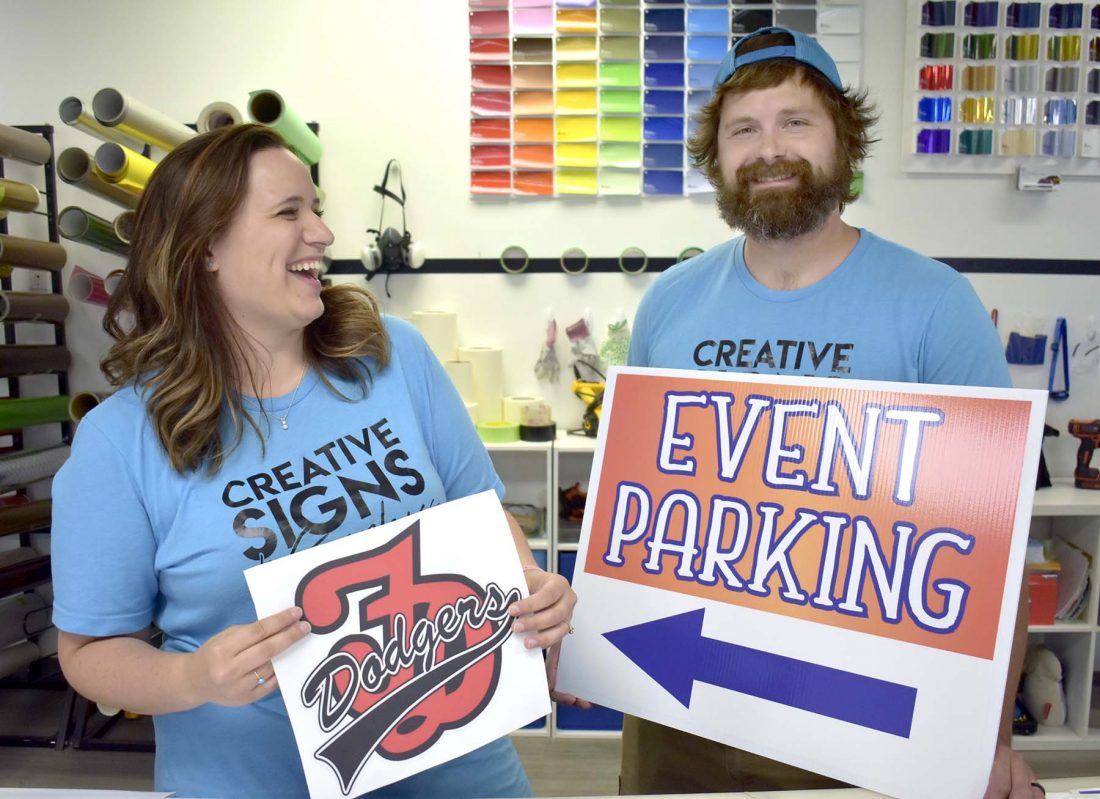 -Messenger photo by Chad Thompson
Maddie Lind, owner of Creative Signs and Graphics, left, shares a laugh with her husband, Zach Lind, of Fort Dodge, as they each hold up a sign they made.

When Maddie Lind became the owner of Creative Signs and Graphics in the summer of 2017, she thought pretty hard about changing the name of the 20-year-old business.

But Lind, who had worked for the previous owners Mike and Gina Cone since 2013, ultimately decided not to.

“When I took over I really wanted to change the name, too,” said Lind, a 2009 Fort Dodge Senior High graduate. “But I know the blood, sweat and tears that the previous owners put into this place. I am proud to carry that on and see what else we can do with it and what else we can offer Fort Dodge.”

At Creative Signs, Lind designs a variety of decals for buildings and vehicles.

“A huge thing has been wall decals and wall murals,” Lind said. “We have done a lot for schools, the library, businesses — visual impactful graphics on walls. We do vehicle graphics — wraps and lettering.”

Lind designs and installs the signs.

The business offers indoor and outdoor signs at almost any size, according to Lind.

“Small or large — any signs,” she said. “We also do design work like logos, business cards and some other print items, .other promotional items. We are working into getting into some of the other larger signs.”

The business does not sell or work on lighted signs currently.

Lind said she gets a lot of help from her husband, Zach Lind, who also holds a full-time job with the city of Fort Dodge.

“Zach is the backbone to this place,” she said. “He does all the heavy lifting — most of the hard physical labor.”

Zach Lind, a 2010 Webster City High School graduate, and Maddie Lind have been together since 2014.

“We met randomly in Ames and found out we were both living in Fort Dodge and pretty much were together ever since,” Maddie Lind said.

The couple marrried in December of 2017.

Maddie Lind holds a bachelor’s degree in graphic design from the Creative Center in Omaha, Nebraska.

“I have been doing graphic design since fifth grade,” she said. “I was lucky…I just knew design is what I wanted to do from a young age. I have been into art since I could pick up a pencil. I took every single credit you could in high school. I downloaded the Adobe programs in fifth grade and have grown and learned with those programs.”

But Lind said doctors advised her not to pursue a career in art.

That’s because she has had mutliple hand reconstructive surgeries in both of her hands.

“I was born without bands that hold your tendons down,” she said.

But it wasn’t until she was a teenager when it really became a problem.

“I basically couldn’t open and close my hands,” she recalled. “That’s when we knew something was wrong. So they got it all fixed up and the doctor said you might not be able to draw again — you may not want to go into a job where you use your hands a lot. I just didn’t really like that answer and didn’t accept it. So I went into it and now I am here.”

She applied to art school her junior year. She was accepted her senior year.

“I had multiple hand reconstructive surgeries my junior and senior years in high school and they healed literally when I graduated,” Lind said. “And I was in Omaha a week after I graduated (high school).”

After graduating college, she decided to move home.

“I loved Omaha, but I’m from a small town and I missed the home feeling you get here that you can’t get in a big city,” she said. “That was a big draw to come home, plus I just missed my family and it doesn’t take me an hour to drive 5 miles.”

Maddie Lind said Zach Lind helps when some of the lifting parts of the job get tough.

“He was fully supportive of me taking over the business and has helped me with every single issue along the way,” Lind said. “The installations are physical labor — he helps me there. Besides him and I there are two other people who help us out. Zach will get up on ladders or in lifts. He’s a numbers guy too. I got the left side of the brain, he got the right.”

“Other than that, I clean the toilets,” Zach Lind added.

Some examples of the work completed by Creative Signs include the trucks displayed at Kemna Auto of Fort Dodge, which have Fort Dodge Dodger and St. Edmond Gael logos on them.

“I feel like we have done a lot more vehicles than buildings,” Zach Lind said. “We do a lot of trailers, too.”

Zach Lind said it takes anywhere from 3 to 5 days to complete a full wrap on a vehicle.

Maddie Lind said she will help customers whether they already have an idea in mind or want her to come up with the design.

“We figure out where the sign will go, whether or not they have the artwork established,” she said. “We can come up with brand new ideas, recreate logos and create new.”

The process is fun for her.

“I design it, print it and install it,” she said. “It’s a whole process from when they walk in the door, setting it up for design, and then printing and install.”

She prides herself on how quickly she meets demands.

“The thing customers have been the happiest with is how quickly we can turn around stuff,” she said. “Ninety-percent of what we do is made in house rather than outsourced We can pretty much meet any deadline thrown at us. We might miss a football game or two, but we get it done.”

Maddie Lind said she enjoys when her family and friends stop by the shop to visit.

She said even the original owner of Creative Graphics will check in on her from time to time.

Pam Neubaum founded the company, Creative Graphics and Design, in 1999.

“She will stop in every now and again, too,” Maddie Lind said. “She’s one of the nicest people in the world. I am happy to carry on the legacy.”

Her favorite aspect of the job is seeing and working with different people.

“Everyone has such different ideas it gives me a new challenge,” she said. “Everyone has different taste and style. It’s fun to work with all different people. And I love being able to go and apply graphics in different places. They learn about me and I learn about them. It’s pretty cool.”