-Submitted photo
The farmhouse was a hub of the Acklin farm, which would grow to include 160 acres, along with a barn, corncrib, various outbuildings and a large garden. This aerial shot of the farm, which is located just south of Lake City, was likely taken in the early 1950s. 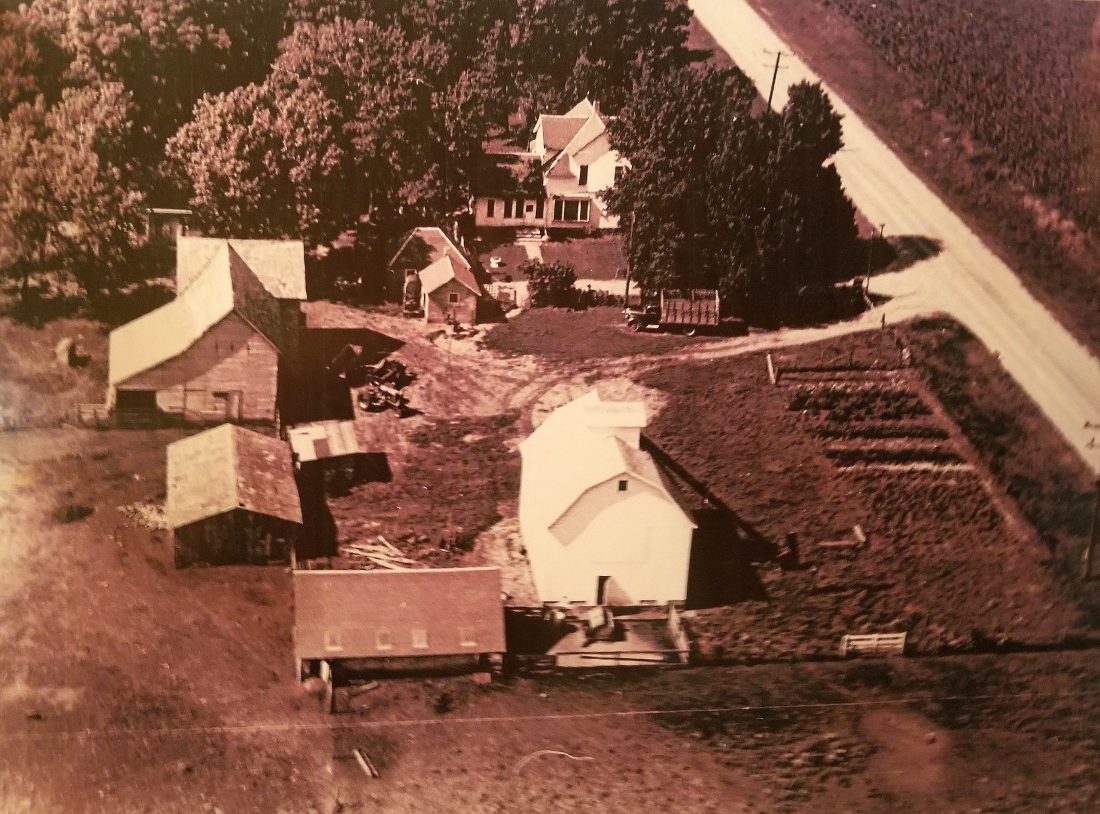 -Submitted photo
The farmhouse was a hub of the Acklin farm, which would grow to include 160 acres, along with a barn, corncrib, various outbuildings and a large garden. This aerial shot of the farm, which is located just south of Lake City, was likely taken in the early 1950s.

LAKE CITY — It probably seemed like more of a nuisance than a serious threat when Charles Acklin scratched his skin on barbed wire one day early in 1927. But after this Lake City-area farmer contracted a tetanus infection from his injury and passed away at age 44 on March 18, 1927, nothing would ever be the same for his family.

“Fortunately, my grandma, Mary, was a tough cookie,” said Linda (Acklin) Stotts, a granddaughter of Charles (“Charley”) and Mary Acklin who lives in Lake City. “After Charley died, Mary moved into town with her children and built the Lake City Hotel in 1935.”

The hotel provided a source of income for the family, as did rental income from their farmland, which the Acklins had purchased in 1916. The farm reflected the Acklin’s deep roots in Calhoun County.

Charley Acklin, who was born in 1882, was a young boy when his family moved to Calhoun County from Marion County, Iowa, in the 1880s. His obituary offered an insightful view of his early years in Calhoun County’s Lake Creek Township.

“Here on this farm he passed through boyhood to young manhood doing his full share in bringing about the transformation of the prairie and sloughs of that day to the fertile farmlands of today. Here as a boy, he breathed deeply from the atmosphere surrounding him of truth, loyalty and sincerity. Here he was taught the honor of honest toil, the priceless value of strict integrity.”

On April 2, 1907, Charley Acklin married Mary Clark, a Lake City native. The couple raised four children on their farm south of Lake City, including LuVerne, Roma, Helen and Charles, Jr. (“Chuck”). According to local lore, the original part of the family’s farmhouse had been built on a hill to the south of the farm. The house was later rolled on logs to the Acklin farm, where the structure was set on a rock foundation.

The farmhouse was a hub of the farm, which would grow to include 180 acres, along with a barn, corncrib, various outbuildings and a large garden.

“Through patient industry and intelligent management, he [Charley Acklin] succeeded in surrounding himself and family with the comforts and conveniences of the modern farm home,” noted Charley Acklin’s obituary. “He had an ardent interest in all that was progressive and uplifting.”

While the Acklins rented their land for decades after Mary and the children moved into Lake City, the farm became the first home for Stotts and her husband, Mike, after the high school sweethearts married in 1967.

“We lived there for 11 years until we moved to Lake City in 1978,” said Stotts, the daughter of Chuck and Jean Acklin, whose children also included Betsy, Scott and a daughter, Kim, who died in infancy.

Stotts and her husband farmed full-time in Calhoun County for 50 years.

“We raised corn and soybeans, farrowed hogs for years and also fed Holstein cattle for a short time,” said Stotts, who noted that her father rebuilt a barn at the Acklin farm in the late 1950s after a tornado damaged the original barn in 1956.

Today, the only buildings still standing on the Acklin Century Farm include the garage, pump house and hog house. Still, the memories endure.

“The Century Farm means a lot to me, because I know the history behind it,” said Stotts, whose family rents out the farmland. “It’s an honor to keep the farm in the family all these years.”