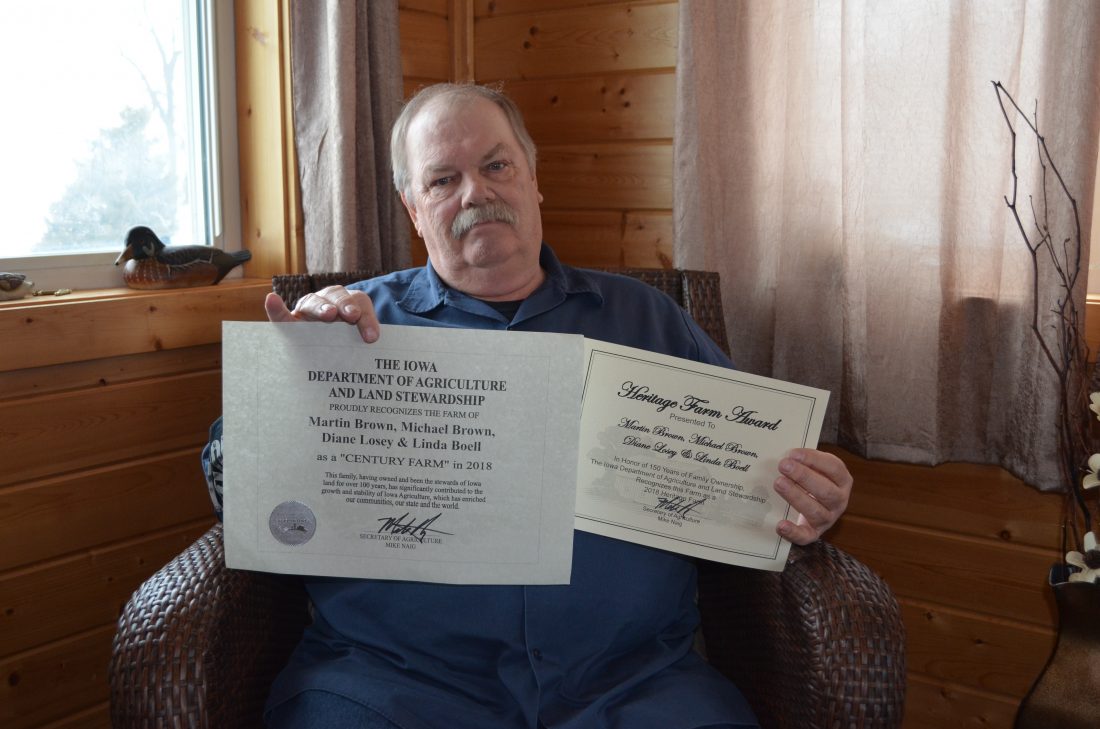 “Brown Empire,” owned by Martin Brown, Michael Brown, Diane Losey and Linda Boell, and first purchased by their great-grandfather, Nelson Hemerson, in 1867 — and officially recorded in 1868 — was awarded the honors of both Century and Heritage Farm.

Martin Brown said his great-grandfather came to the Humboldt County area from Madison, Wisconsin after his daughter (and Brown’s grandmother) Lettie was born.

“He built the house and once the house was built the family came out here by covered wagon,” Brown said.

Since it was so close to the Spirit Lake Massacre, Brown said American Indians were still prevalent in the area.

“Grandma said they kept a pot on the stove for scraps and being close to the river, Indians would stop and ask for food and they gave them those scraps,” he said, adding that he was told that the last time his family saw an Indian near the farm was 1910.

“My cousin saw him down at the river combing his hair,” Brown said. “It scared my cousin, so he ran away. The Indian just laughed.”

The location of the farm allowed for a lot of game hunting. The harvests from the hunting helped Hemerson pay for the land.

One hundred and fifty years later, shooting remains a large part of the Brown family, though today it’s mainly as sport.

“We have award winning trap shooters in the family,” said Brown.

William and Lettie Brown were able to hold on to a fair amount of the original 760 acres.

The younger Brown said they were given 103 acres, bought some from a family member and inherited more, allowing them to keep 260 acres.

Brown said his grandfather was a mailman when he married his grandmother. And despite not having any experience with farming, they were fortunate to never have to mortgaged the land — not even through the Depression era.

William and Lettie Brown continued to farm and had help from their son, Austin “Bus” Brown.

Martin Brown joined the farming operation and began farming full-time when he married his wife, Nancy.

Brown is the only original family member that is still farming Hemerson’s ground, and feels it is an honor to not only be farming his family’s Century Farm, but their Heritage Farm as well.

He feels that the way some people look at a farm has changed.

“It used to be the farm was the center of their universe,” Brown said. “Now, it’s just ground to some. It used to be your life.”