If you want it delivered in Fort Dodge, new service could be your next go-to

-Messenger photo by Peter Kaspari
Rickie Johnson, left, owner of Anything 2 Go, delivers a food order to Kevin Crimmins, of Fort Dodge. Johnson started Anything 2 Go, which picks up orders for customers in the Fort Dodge area and delivers to them.

-Messenger photo by Peter Kaspari
Rickie Johnson, owner of Anything 2 Go, prepares to deliver an order of food to a customer in Fort Dodge. Anything 2 Go is a service that picks up orders that are called in by customers and delivers them. 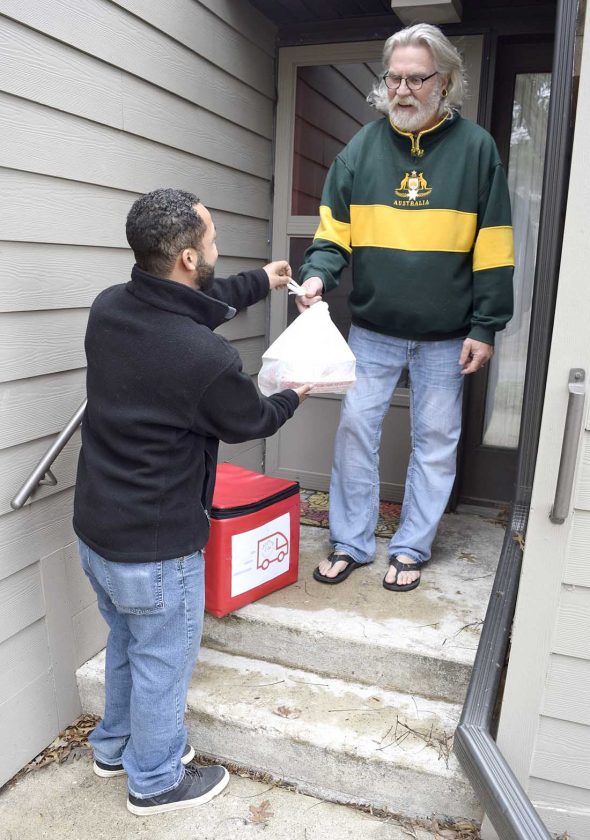 -Messenger photo by Peter Kaspari
Rickie Johnson, left, owner of Anything 2 Go, delivers a food order to Kevin Crimmins, of Fort Dodge. Johnson started Anything 2 Go, which picks up orders for customers in the Fort Dodge area and delivers to them.

Feeling hungry, but are too busy working to pick up your meal? Need to pick up groceries, but you don’t have anyone to watch the kids? Stuck at home, but your favorite restaurant doesn’t deliver?

A new delivery service in Fort Dodge aims to alleviate those issues.

Anything 2 Go accepts call-in food orders from area restaurants and will deliver them right to your door, according to owner Rickie Johnson.

He started Anything 2 Go in January, and was inspired to create the business after seeing similar services being offered in Los Angeles, California, where he and his family used to live.

“We moved over from Los Angeles and they have these services over there,” he said. “We figured with a town of 26,000 people and 50-plus restaurants that don’t deliver and the age group, we thought, ‘why not give it a shot and bring the service to Fort Dodge, Iowa, and see how it goes?'” 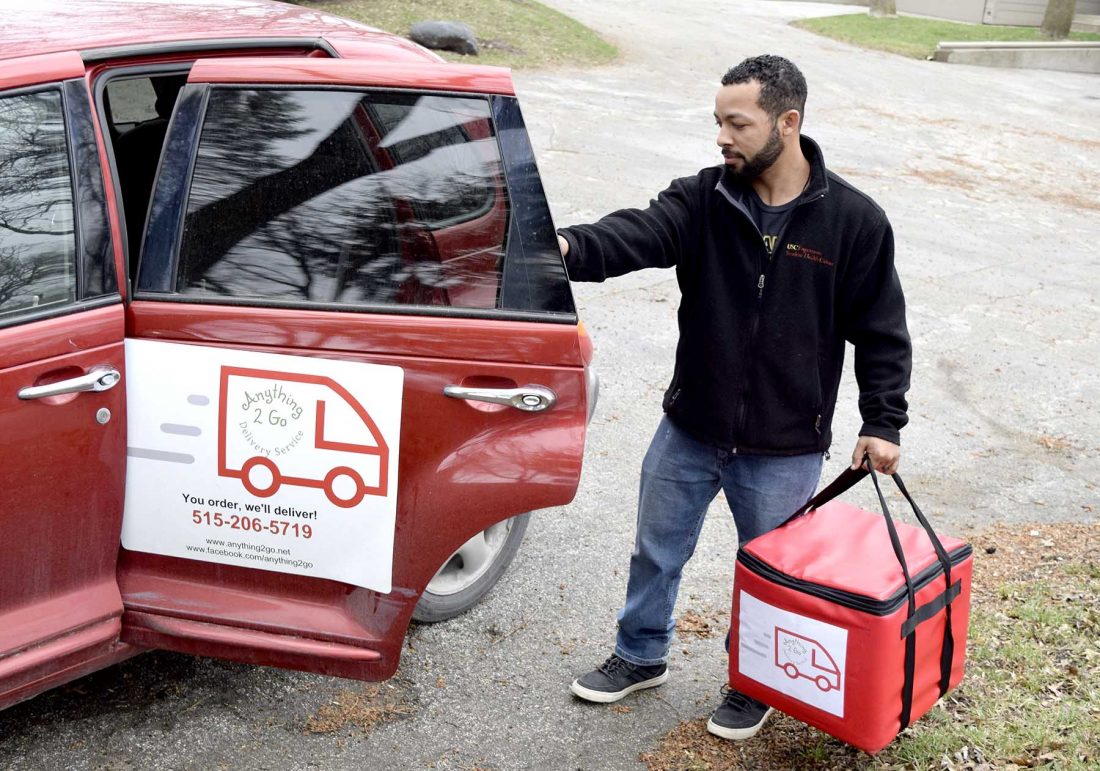 -Messenger photo by Peter Kaspari
Rickie Johnson, owner of Anything 2 Go, prepares to deliver an order of food to a customer in Fort Dodge. Anything 2 Go is a service that picks up orders that are called in by customers and delivers them.

He based the idea on similar companies such as Grub Hub and Postmates, which also deliver from places that don’t offer that service.

The business is based out of his home, but Johnson said there are two delivery vehicles and two employees.

“We make standard restaurant deliveries,” he said. “We do online grocery pickups and deliveries that people want from gas stations, if they need something from A to B. Most of our deliveries are through restaurants, though.”

Johnson said he’ll deliver anywhere within the Fort Dodge city limits and up to 10 miles outside of Fort Dodge. In the past, he has delivered to places such as the Koch Nitrogen Co., east of Fort Dodge, and the Iowa Crossroads of Global Innovation industrial park, west of Fort Dodge.

Utilizing Anything to 2 Go is easy, according to Johnson.

“Basically, you call in your order to your chosen restaurant,” he said. “Call in with your name and then, as soon as you’re done with them, you call Anything 2 Go. Answer a few questions — your name, what we’re picking up, where we’re delivering to — and then we send a delivery driver on their way.”

Not only that, but Johnson said anyone who orders can track their delivery driver and get real-time updates on the delivery process.

Anything 2 Go will deliver almost anything with the exception of alcohol, as Johnson said alcohol deliveries are illegal in Iowa.

“We deliver anything from food, snacks, groceries,” he said. “(If) you need some paperwork sent to the office.”

In fact, he recalled one time when Anything 2 Go was asked to make a bit of an unusual delivery.

A woman had arrived at work and realized she forgot her glasses on her front porch. She was unable to leave work, so Johnson said she contacted Anything 2 Go and asked if they could pick up her glasses.

Sure enough, Johnson said the delivery driver went to her home, found her glasses on her porch, and delivered them to her at her workplace.

The service operates Monday through Saturday from 4 p.m. to 9:30 p.m. Johnson said they deliver to anybody from children to senior citizens.

“The kids have their parents’ permission, of course,” Johnson added.

To order from Anything 2 Go, call 515-206-5719 and speak with an agent. Customers can also place their order online, either on the service’s Facebook page or its website, anything2go.net.

Information on delivery prices can be found on the website.

Johnson said he’s enjoyed getting to know all of his customers. Although he’s only been open for a few months, he already has regulars who order from him nearly every day.

“I like people,” he said. “I love interacting with people and being able to fulfill their needs. It’s a gratification thing.”

Starting up Anything 2 Go has been eye-opening for Johnson.

“It takes hard work and dedication to get something off the ground, especially a brand new idea that the majority of people have never heard about, and trying to teach people about the service,” he said. “It’s a challenge, but I accept the challenge with open arms and I’m glad to have it.” 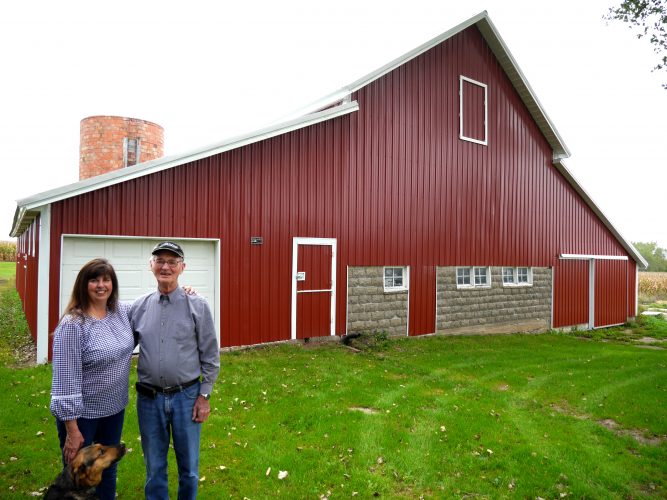 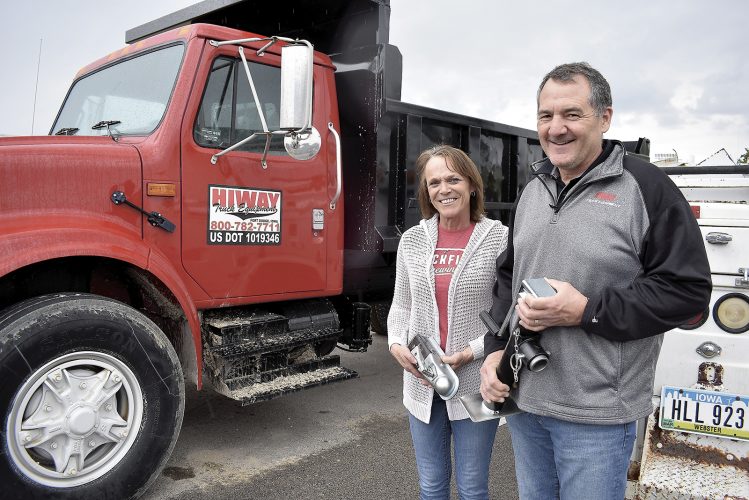