-Messenger photo by Chad Thompson
Hammers and other tools hang in the Nokomis Woodworking Shop in Humboldt.

-Messenger photo by Chad Thompson
Bret Davis, a member of the Nokomis Woodworking Club, is all smiles at the community wood shop in Humboldt.

-Messenger photo by Chad Thompson
Dean Clasen, member of the Nokomis Woodworker’s Association, holds up a tool box he made.

-Messenger photo by Chad Thompson
The Nokomis Woodworking Club is open for members to join in Humboldt. The club is an opportunity for people to learn more about woodworking or for more advanced woodworkers to build various projects.

-Messenger photo by Chad Thompson
A CNC machine is used to make the grooves for this clip art at the community wood shop in Humboldt. 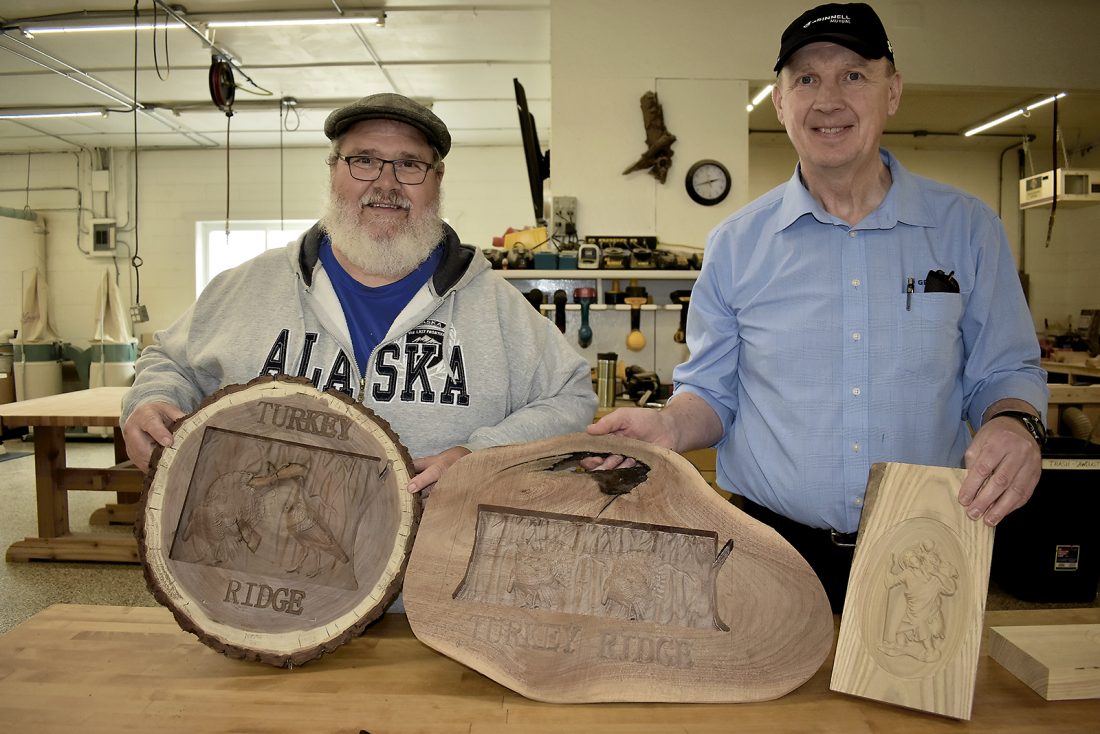 HUMBOLDT — As a retired industrial arts teacher, Dean Clasen has long had an appreciation for designing, creating and seeing a project become tangible and useful.

“The biggest thing is I like the aspect of being able to design something and figure out the problem solving and what goes into it,” said Clasen, who retired in 2013 after 25 years of working for the Humboldt Community School District. “And then having a finished project. Going to graduations and I see a middle school industrial arts project on display. There’s something gratifying to everyone to be able to come up with something tangible.”

It’s an appreciation that he and several other retired or semiretired Humboldt residents wanted to share with the community in the form of woodworking.

So about three years ago, Clasen — along with Bret Davis, CEO of Sister’s Home Style Entrees, and Mark Schultz, a former lineman for MidAmerican Energy Co. — opened Nokomis Woodworking Club. 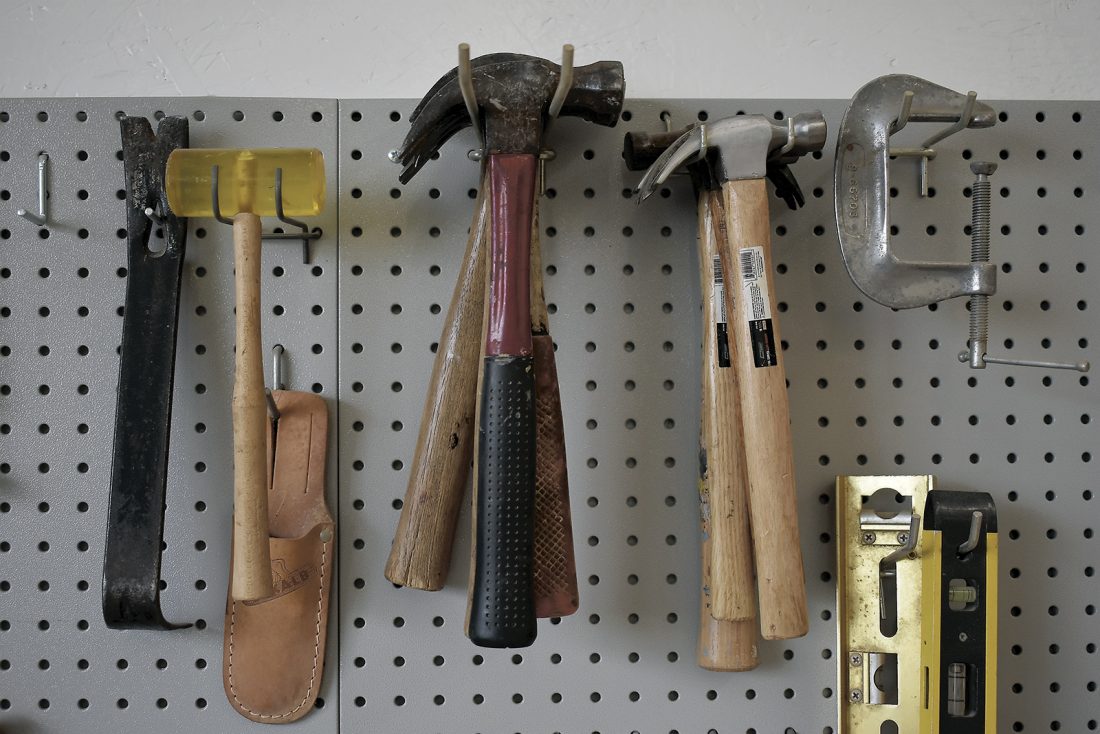 -Messenger photo by Chad Thompson
Hammers and other tools hang in the Nokomis Woodworking Shop in Humboldt.

“This thing was a pigsty,” Davis said, referring to the condition of the building prior to remodeling. “The roof was falling in.”

But most people would have no idea if they walked into the space now, which features clean, shiny flooring, solid tables, work benches and a wide assortment of tools and machines.

“None of this happens without Bret,” Clasen said. “He put down the epoxy floor, painted, the roof is new. He’s kept up the building, with this kind of in mind. Once we had the structure, we had so much sweat equity we could apply.”

The idea for a woodworking club was pretty simple, said Clasen, who also works part-time for Humboldt Mutual Insurance as a loss control specialist.

“We wanted to create an environment where we could get people who had a linked interest of woodworking to share ideas and knowledge and use to try and educate others to this area,” Clasen said. 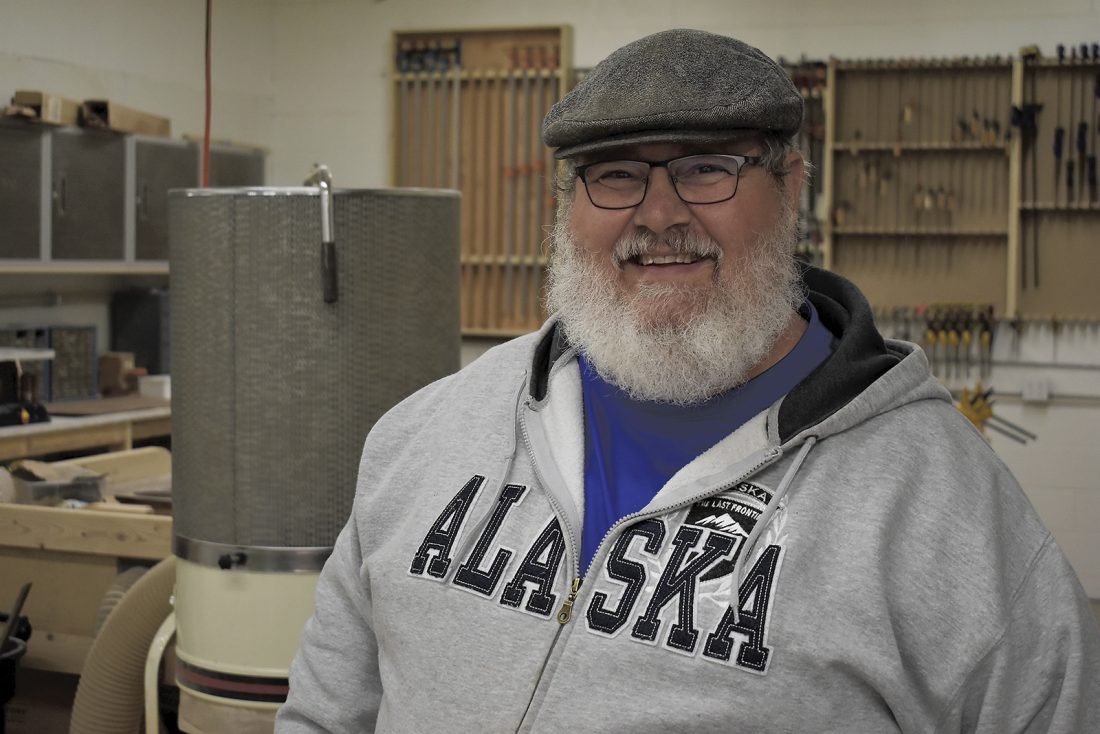 -Messenger photo by Chad Thompson
Bret Davis, a member of the Nokomis Woodworking Club, is all smiles at the community wood shop in Humboldt.

Clasen said he knew a lot of people in the community who were ready to retire, but didn’t have a hobby.

But he also said the initial cost for someone to try and get all the tools they need for woodworking is steep.

The club allows people of all skill levels to explore woodworking.

“They come in and have some time doing the woodworking and not have to worry about that investment,” Clasen said. “And if they didn’t like it, they could walk away.” 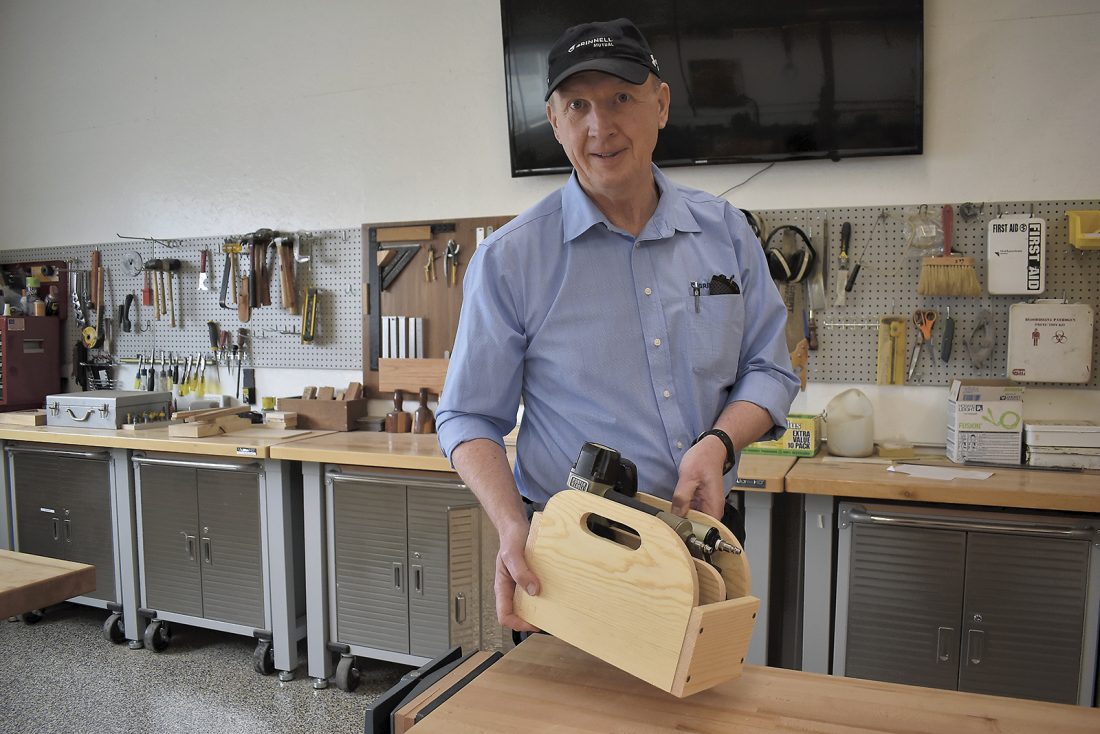 -Messenger photo by Chad Thompson
Dean Clasen, member of the Nokomis Woodworker’s Association, holds up a tool box he made.

The Nokomis Woodworking Club gets its name from Lake Nokomis, located just down the road from the shop.

The club stands at about 28 members.

“Because of the space and different times people come in, it doesn’t seem like it’s that many,” Clasen said. “Sometimes we wonder if anyone is using the shop but then we know there is because there’s sawdust in the can.”

Many of the finished projects are donated to local organizations fundraisers such as Domestic/Sexual Assault Outreach Center or the St. Mary’s Gala.

The club is made up mostly of retirees or people nearing retirement. 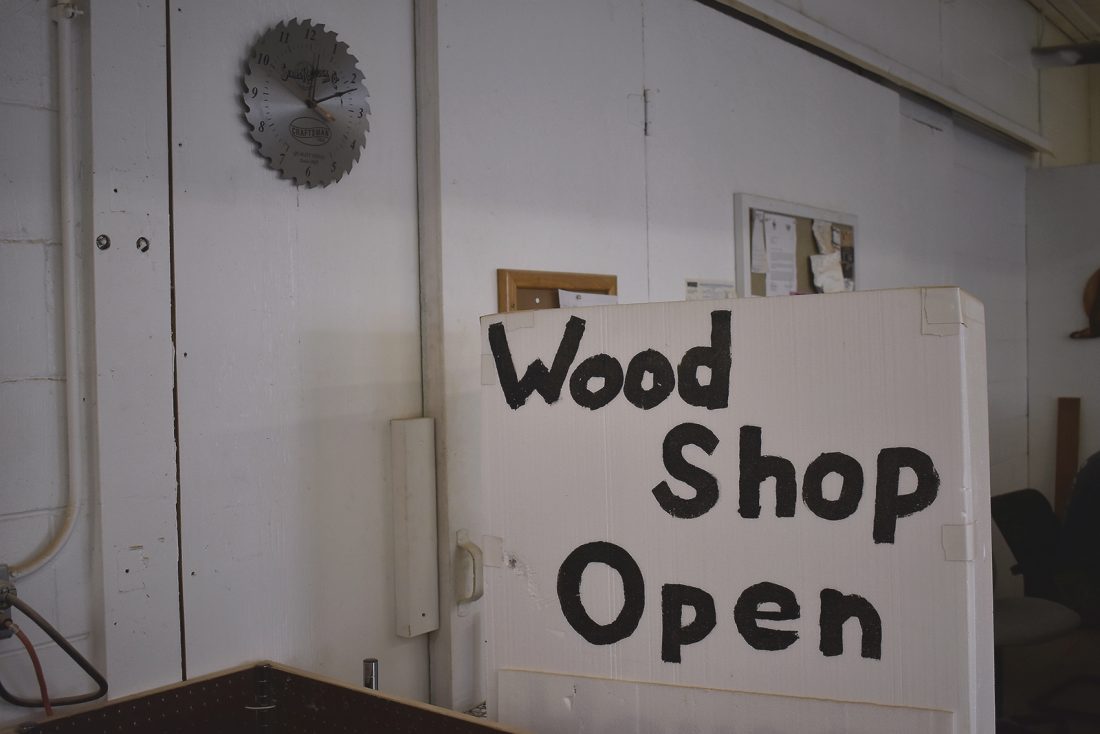 -Messenger photo by Chad Thompson
The Nokomis Woodworking Club is open for members to join in Humboldt. The club is an opportunity for people to learn more about woodworking or for more advanced woodworkers to build various projects.

“Woodworking is almost kind of a lost art,” Davis said.

But Clasen said involving youths in the club is encouraged.

And Clasen said there are some younger people and women who use the shop.

But the trend of fewer opportunities for vocational education in schools is a disturbing one for Clasen. 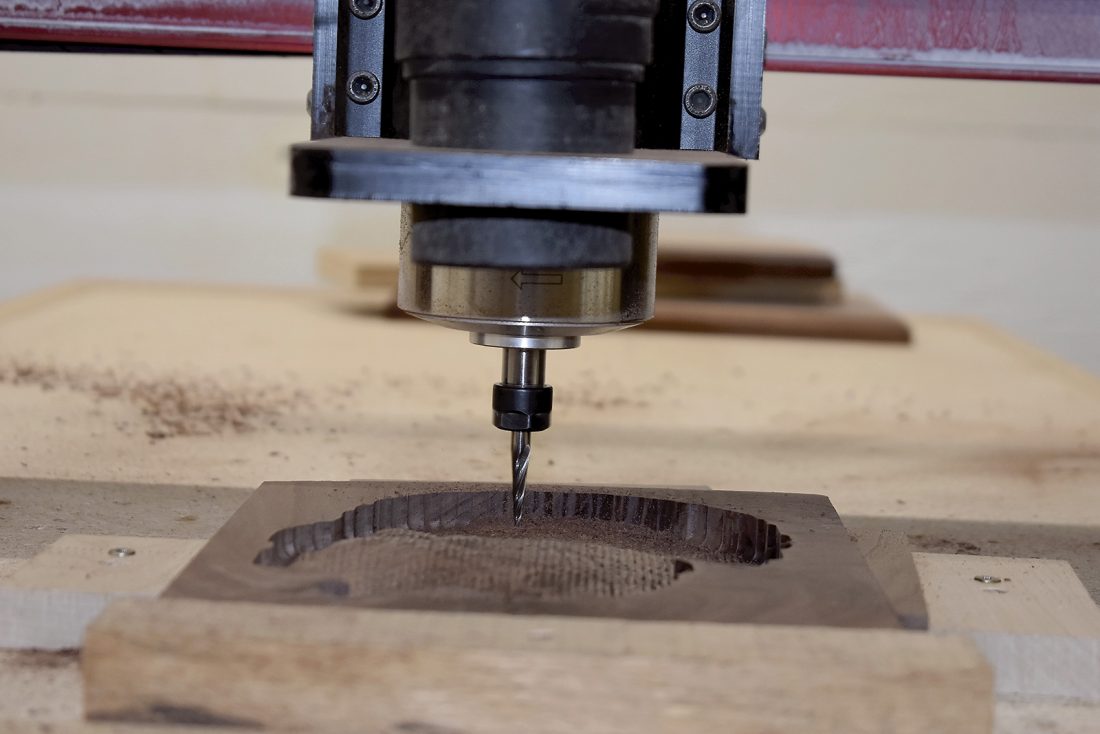 -Messenger photo by Chad Thompson
A CNC machine is used to make the grooves for this clip art at the community wood shop in Humboldt.

It’s a trend he saw near the end of his career.

“I saw less and less being offered at the high school level,” Clasen said. “So I wanted to see younger people get exposed — woodworking and the skills associated with that.”

Clasen said when he first arrived to teach in Humboldt, there were three industrial arts teachers.

“Now, this year, a teacher has come out of retirement a second time and teaching half the time (seventh through 12th),” Clasen said.

He sees multiple reasons for the decline in opportunities.

“Wood working, industrial has been cut back,” he said. “A lot of it has been focused on computer-related careers. The people who would go into teaching industrial arts would make more money by going into industry instead.”

The combination of fewer teachers and fewer programs has left a hole for those interested in industrial arts.

“I think it’s unfortunate because some kids that just thrive in the vocational areas and as a result their school experience is not as rich as it could be because the options are limited for them, either because the teachers aren’t there or because classes have been reduced.”

The community wood shop is one way to close that gap for interested youths.

“The industries are crying for people with our skills,” Clasen said. “I think there will come a time where people will say we still need those vocational guys and gals.”

It can also serve as a way to boost mental health for its members, according to Davis.

“One of our members said this is cheaper than a psychiatrist,” Davis said. “It gets him away from work and a place to focus on something else.”

And the other members can bring a different perspective to a project, Davis said.

“It’s fun,” Davis said. “If you bring your stuff here, you have more people to help and there’s more than one way to do something. The main thing is we go home with 10 fingers.”