Do you want to read a book?

-Messenger photo by Hans Madsen
Carol Foltz shows off a few of the many books she’s read including several by her favorite authors such as Steve Robinson, Robert Jordan and Terry Pratchett. 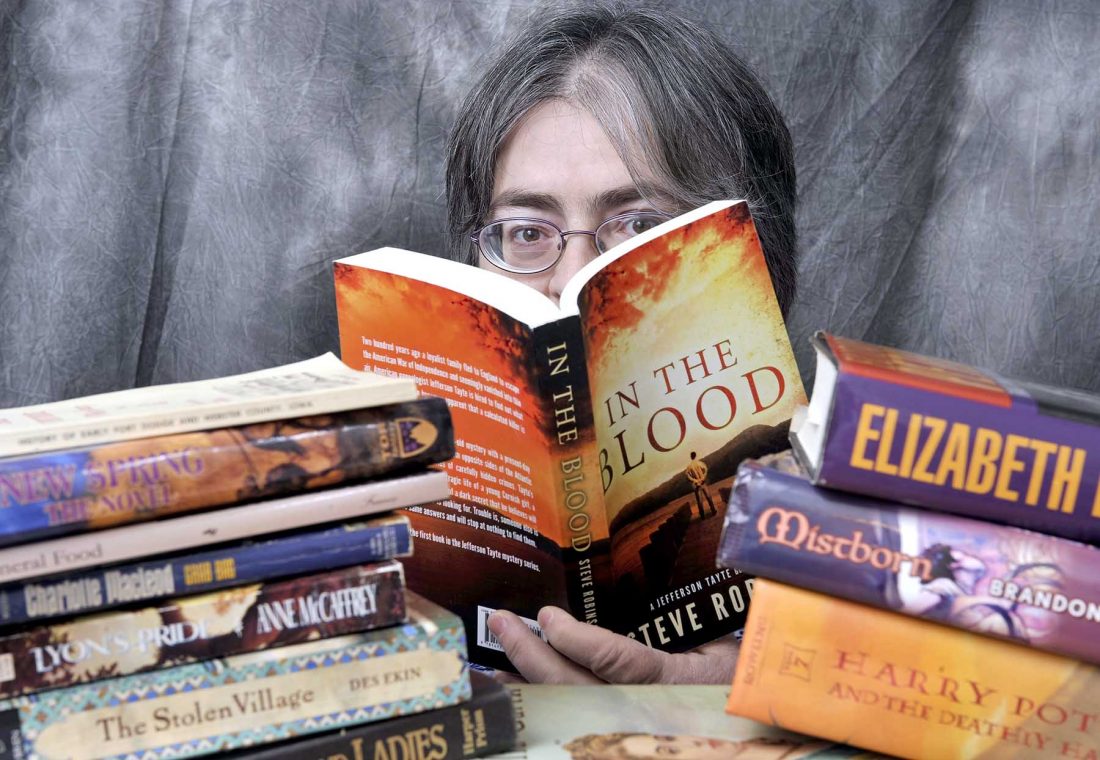 -Messenger photo by Hans Madsen
Carol Foltz shows off a few of the many books she’s read including several by her favorite authors such as Steve Robinson, Robert Jordan and Terry Pratchett.

I am an avid reader. That saying may not do my habit justice.

When I finish a book, I often start right into another one. Sometimes I immediately start rereading the one I just finished.

I currently in the middle of reading four books, three of which I have already read. But I enjoy revisiting them.

So when I heard of the jolabokaflod — or Christmas book flood — tradition in Iceland, I thought, “these are my people.”

This tradition dates back to 1944. Iceland had become independent of Denmark. Imported goods were expensive, but paper was less so. Giving books as presents became quite popular. 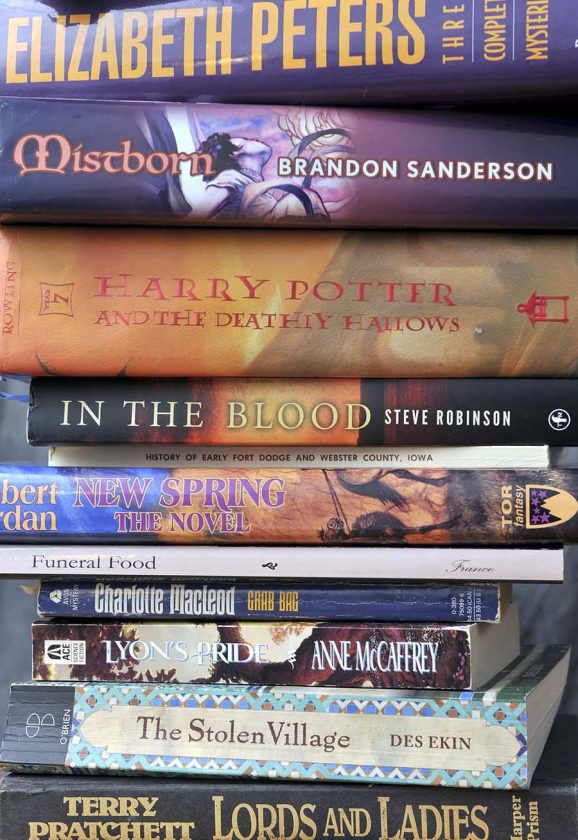 The Icelandic book trade publishes a yearly Book Bulletin that is sent to every household in the country in November.

People use the catalog to order books to give as Christmas presents. Presents are exchanged and opened on Christmas Eve, and then people settle down to read their new books. They may drink hot chocolate or a non-alcoholic drink called jolabland.

This is my kind of holiday.

Let tell you about a few of my favorite books and authors.

My taste runs heavily to science fiction and fantasy, but I enjoy other genres — mystery, historical fiction, literary, historical nonfiction, even books that are labeled for children or young adults.

I follow several authors on social media, and some of them are happy to interact with fans. They give updates on what they are currently working on, where they are going and even offer giveaways. I have a signed copy of “In The Blood” by Steve Robinson.

That book is the first in the Jefferson Tayte genealogical mystery series. Tayte was adopted, and always wondered where he came from. So from that desire, he developed a career of helping other people find out where their families came from. Tayte’s travels take him from the Washington, D.C., area to Great Britain and Germany. He learns a lot about his family’s past, and goes through a lot of trials and adventures that are a little more risky than those of your average genealogist.

Robinson has recently released “The Penmaker’s Wife,” his first book that does not involve Jefferson Tayte. This book is definitely edgier than the Tayte books. It’s set in the years from 1880 to 1896. Angelica Chastain has a goal of providing the best for her son, William, and she’s determined not to let anyone stand in her way.

I have given most of my Terry Pratchett books to my daughter, Cayla Foltz. We are great fans of his Discworld series. He wrote several other books series, and also co-wrote “Good Omens” with Neil Gaiman and “The Long Earth” series with Stephen Baxter.

Several of the Discworld novels have been made into TV movies. “Good Omens” was updated and adapted into a six-part series.

Pratchett was diagnosed with early-onset Alzheimer’s disease in 2007 and died in 2015. None of his unfinished works will be published, but he wrote enough books to keep a reader busy for a very long time.

The “Wheel of Time” series by Robert Jordan was unfinished when he died in 2007. He had completed 11 books and had plans on how the series was to end. His widow, Harriet McDougal, contracted with Brandon Sanderson to complete the series using Jordan’s notes. There were three more books to finish that story.

Rand al’Thor is sure he knows what he will do with his life. He lives with his father outside the village of Emond’s Field, where they raise sheep. He spends time with friends Perrin Aybara and Mat Cauthon, and is looking at the mayor’s daughter, Egwene al’Vere, with the idea that his future and hers may be the same.

But on a spring day after a harsh winter, several strangers come to town. They bear news of the world outside the small village, and later that night the village is attacked by trollocs. This is the start of an adventure for the friends and some others from their village. This is epic fantasy.

I first learned about Brandon Sanderson when he was chosen to complete the “Wheel of Time” series. He was definitely the right person for the job. I enjoyed the books enough to look into what he had written on his own.

Most of Sanderson’s books are in what he calls the Cosmere. Although each world has its own system of magic, they are connected. One world (“Mistborn” series) is based on using metals to create magical effects. One group of magic users – allomancers — ingest small amounts of a particular metal to get a particular effect — to pull a metal object toward them (or to pull themselves toward the object if the object has more mass), or to push the object away from them (or push away from the object if it has more mass), for example.

Another group of magic users in the “Mistborn” world stores effects in metal that they can use later. So a feruchemist could store health in a bracelet that they could use later when injured or ill. But to do that, they have to rest for a time to store the healthy energy.

Sanderson has announced that the fourth book in the “Stormlight Archive” series will be released next November. He plans 10 books for that series, and 40 books for the entire Cosmere. I haven’t read all of his books, but I enjoy the ones I have read — and love to reread them.

The Polly Giller books are not high literature. They are fun. There is a cast of characters, and usually a new person or two introduced in each book. The stories are set in the fictional town of Bellingwood in Boone County. Polly Giller, who grew up in Story City and went to college in Boston, leaves her library job there to return to Iowa. With the inheritance after her father’s death, she purchases an old school building in Bellingwood with the idea to renovate it and create a retreat for artists and writers.

During the renovation, two bodies are found in the ceiling of a bathroom. The local police chief and the sheriff have to figure out who the bodies are, and who killed them and hid the bodies. Polly makes new friends, who will be her support system in the future.

There’s a new full-length book in March, June, September and December, as well as what the author calls vignettes — short story collections from the point of view of other characters. There is also a Christmas story each year.

The first book is “All Roads Lead Home.” Some of the Kindle books are “boxed” on Amazon, so you can get three books at a time, and occasionally they are free. It’s a great way to get started on the series.

Greenwood Muir is one of the authors who is actively involved with fans. She has a website (nammynools.com), Facebook page (Bellingwood), and you can sign up for her newsletter for updates.

This author began her Alafair Tucker mystery series with “The Old Buzzard Had It Coming.” Alafair is the mother of 10 children, raising them on a farm outside a small town in Oklahoma in the early 20th century. She knows just about everybody in town — being related to a good number of them — and uses common sense and motherly instinct to get to the bottom of the mysteries. There are nine books in the series and I have them all. I highly recommend them.

Casey has begun a new series with “The Wrong Girl” about one of Alafair Tucker’s daughters, now grown up and a movie star in Hollywood. I haven’t read this one yet, but it’s next on my purchase list.

Reading is important to me and has always been important to my family. I keep books at my desk and in my car in case I have to wait somewhere. I have my tablet with the Kindle app so I can read in line at the grocery store or spend my lunch break in another world.

Reading is important to children. It teaches them many things. It improves their vocabulary. It gives them a broader view of the world. It teaches empathy. If you read to your child, you teach them these things, and also that you love them.

Reading is important to adults. It gives you a broader view of the world. Reading fiction can give you insights into why people act the way they do. Reading nonfiction can give you a basis for knowledge of things outside your work and home life. I have also made the effort to read fiction from authors of different ethnic backgrounds in order to learn about different perspectives.

While the time is short to purchase books as Christmas presents, it’s still possible. There are several stores in town that sell books. You can also buy used books at the Friends of the Library book store (open 1 to 5 p.m. on Mondays, according to the Fort Dodge Public Library website).

Don’t forget to check something out at the library for reading over winter break.

Try something outside your normal picks. Be adventurous. You never know where it will lead.

Jay Johnson moved into his first apartment 10 years ago, with support from LifeWorks Community Services. “When ...