Bringing back the memories 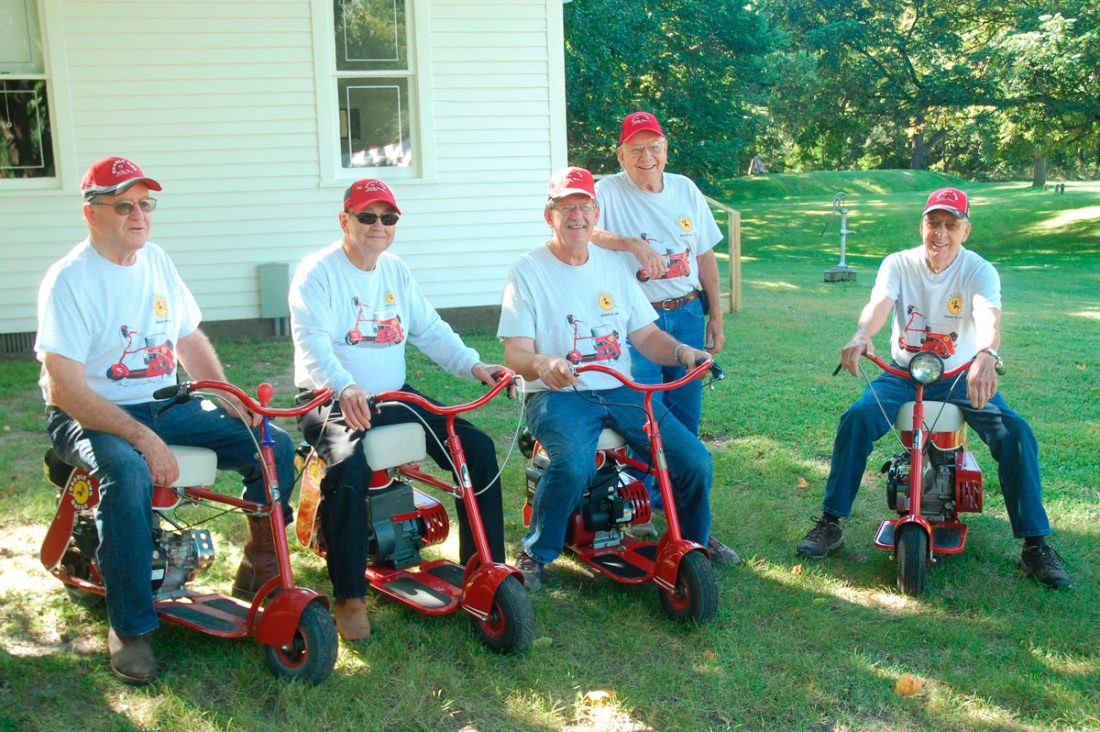 WEBSTER CITY — It happens every September: Just like the swallows returning to San Juan Capistrano, the Doodle Bugs return to Webster City.

This year is the 33rd annual Doodle Bug Reunion, sponsored by the Doodle Bug Club of America, and it runs from Wednesday through Sept. 15.

The Doodle Bug motor scooter was built from 1946 to 1948 by the Beam Manufacturing Co. in Webster City. They were sold through Gambles Stores.

Although the small scooters are considered inexpensive in the rear view — they sold for as little as $69.95 at the time — that comes to more than $920 in 2019 dollars.

No matter what their cost, the little red scooters are now prized by collectors. Club members believe there may be as few as 1,000 left in existence.

Verm Ratcliff, of Webster City, is one of the founders of the local Doodle Bug Club. He researched the origins of the Doodle Bug and has collected stories about them. In doing so, he reached out to Bill Moore, of Mason City.

The two compared notes and research. After much discussion, they organized the Doodle Bug Club of America.

At the first reunion, five scooters on display, according to Ratcliff.

But over the years, the event has grown.

Now enthusiasts from 37 states are expected to attend the gathering, Jerry Wells, another club member, said.

This year, the reunion is expanding to four days, he said. But often, enthusiasts from across the United States begin to arrive days before the festivities officially begin.

“It’s always been a three-day show. This year, it’s four days. We’re going to set up on Tuesday this year, but there are guys that come even earlier,” he said. “Some are coming Monday. Another is coming in on Tuesday. One guy is coming in on the Saturday before.”

The reunion is headquartered at the Hamilton County Fairgrounds in the Ed Prince Building. That’s where the group will gather to share stories and visit with other club members. There’s also a swap shop with parts and scooters for sale.

On Wednesday of the event, the club will have a group ride to the local Dairy Queen for lunch, followed by an obstacle course challenge at the fairgrounds in the afternoon.

“Don Nokes is going to set up a course so we can test our riding skills a little bit,” said Wells.

Afterwards, the scooter riders will take a trip to downtown Webster City where they’ll tour the mural display at the corner of Second and Des Moines streets and the new solar sculpture at City Hall Plaza.

On Thursday afternoon, the reunion attendees will take the first of two rides to Briggs Woods Park on the Boone River Trail. That’s something the club has done every year for the past decade or so, but this year, they will go “off trail” to tour the park.

“This is in recognition of Briggs Woods Park’s 100th anniversary this year,” said club member Gerald Huisman. “We’ll have a guided tour of the park.”

Wells added, “The group has only seen the park from the trail and they are just in awe of Briggs Woods. They can’t believe that a community would have that kind of a trail and park.”

The group will ride from the fairgrounds to the Wilson Brewer Historic Park on Friday morning for coffee and tours of the museum complex.

Tours of the Jane Young House and the Kendall Young Library will also be offered on Friday afternoon, Wells said.

That evening, the Webster City FFA Chapter will serve a pork burger meal at the Ed Prince Building. The meal, which is open to the public, will benefit the local FFA chapter, according to Huisman. The cost of the meal is $5.

“The FFA serves the meal and all proceeds will go back to them,” Huisman said. “Last year they served 180 people.”

Saturday morning will feature the final group ride — another excursion to Briggs Woods Park via the Boone River Trail. The club will gather Saturday afternoon for the annual meeting at the fairgrounds, followed by the banquet.

Those staying over until Sunday will meet for a farewell breakfast at the local Hy-Vee before heading for home.

Because the little red scooter produced in Webster City years ago is such a big part of the community’s history, Wells wants the public to know it is welcome to stop out to the fairgrounds, meet the club members and learn more about the Doodle Bugs.