Blues Under the Trees

-Messenger file photo by Hans Madsen
Blues artists Joe and Vicki Price lead off the performers at the 2018 Lizard Creek Blues Society Blues Under The Trees at Frontier Sports Park. Other performers on the bill included Kevin BF Burt, John Nemeth and Selwyn Birchwood. The Prices have become the traditional first act at the show. 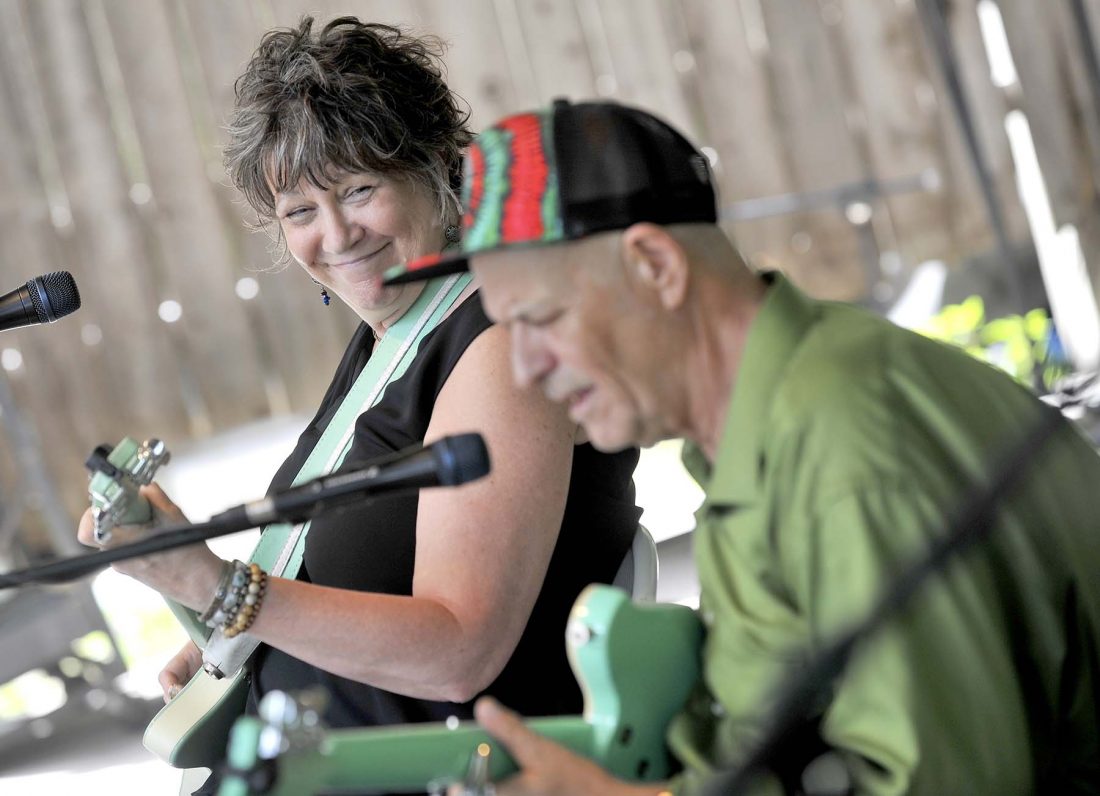 -Messenger file photo by Hans Madsen
Blues artists Joe and Vicki Price lead off the performers at the 2018 Lizard Creek Blues Society Blues Under The Trees at Frontier Sports Park. Other performers on the bill included Kevin BF Burt, John Nemeth and Selwyn Birchwood. The Prices have become the traditional first act at the show.

The Lizard Creek Blues Society helps to preserve, promote, and educate music lovers about an American original — the blues. The society helps to bring blues to a population that may not otherwise have the opportunity to see live blues artists perform.

As more people are able to discover and enjoy blues through live performances, Lizard Creek Blues Society hopes to keep the blues alive. What better way to keep blues alive than to offer a great concert with great performers and delicious food and drink?

Blues Under the Trees is an exciting event right in our own backyard. Kind of. While it is technically held at Sports Park Raceway, it feels like a concert in your own backyard with several of your best friends.

Whether you are new to blues and just trying it out for the first time, or you are already a lifetime blues lover, Blues Under the Trees 2019 on July 27 will just make you happy.

The highlight of this day to evening event is, of course, the amazing blues music that will be played throughout. There are four performers during the concert.

One of the groups is Malcolm Wells and the Two Timers, who hail from Des Moines. Their traditional, old-style blues music is sure to make any blues lover happy. The band’s hard-hitting rhythms and powerful harp and guitar lines evoke a sound right out of the early Chess Records catalog. Featuring Malcolm Wells on harmonica and vocals, Matt Woods on guitar, Dwight Dario on drums and Scot Sutherland on bass, this band boats some of the finest roots musicians in the Midwest. The Two Timers have the ability to turn any situation into an old-fashioned blues party! Whether playing an old blues favorite or cranking out one of Malcolm Wells clever original tunes, The Two Timers can deliver.

Joining the party again this year is Joe and Vicki Price. They are an electric-powered blue-roots duo from Iowa, featuring dueling guitars, Joe’s tapdancing feet and bluesy vocals. Joe has been performing for over 50 years. He is a member of both the Iowa Blues Hall of Fame and the Iowa Rock & Roll Hall of Fame. His slide guitar playing is a cross between Mississippi Fred McDowell and Elmore James. Vicki has been performing with Joe since 1982. Both are talented guitarists, vocalists and song writers. The couple travel the nation bringing their finger-style guitar and original tunes to a wide variety of audiences. The music has been described as “a righteous, joyful, foot-stomping jubilee.”

Heather Newman Band will be performing this year as well. Heather Newman had picked up a bass guitar only six months prior to her bands first on stage appearance at Knucklehead’s Saloon in Kansas City, MO March 17, 2017, where she introduced her music to the stylings of Keith Ladd on the guitar, bringing on a unique mixture of American roots genres. The Heather Newman Band immediately began to captivate audiences with their powerful performances and Heather’s dominant yet pixie-like stage presence.

Headlining the concert this year will be Hamilton Loomis. Born and raised in Galveston, Texas, Loomis is the son of musician parents who listened to blues, rock and soul. Music ran in his veins and, with instruments readily available around the house, he picked up drums, piano, guitar and harmonica, honing his multi-instrumental talent in addition to performing regularly as part of his family’s doo-wop group.

“Blues Under the Trees is a unique experience,” said Lizard Creek Blues Society President Nate Gibson. “The combination of peaceful venue, great people, world class musicians and production make for an incredible atmosphere. From the Artists themselves to annual attendees, this has become their favorite event! I guarantee a good time, great food, and amazing entertainment. Hope to see you … under the trees.”