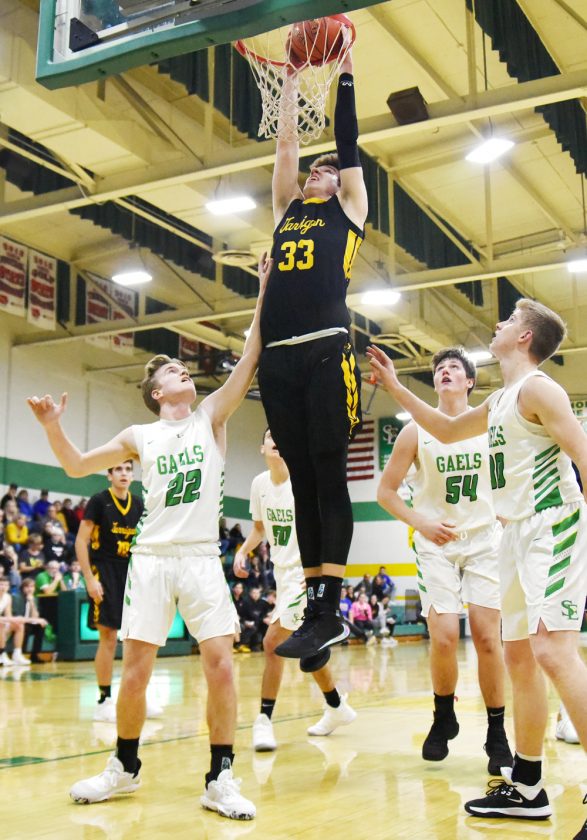 SPENCER — Cade Winkel was not going to let Saturday night’s Class 1A substate final be his last time in a Bishop Garrigan uniform.

The senior scored a team-high 17 points, lifting the Golden Bears to a 68-48 victory over South O’Brien here and into the state tournament for a second consecutive season.

Bishop Garrigan (22-2 overall) will be competing in the elite eight for the fourth time in school history, and the first in the same season with the girls squad, which begins play at state on Wednesday inside Wells Fargo Arena.

John Joyce, another senior starter for BGHS, added 16 points, including nine in the second quarter alone.

“I just told myself in the fourth that we’re the better team, we’ve put in the work and no one is going to stop us,” Winkel said. “Hats off to South O’Brien, they are a fantastic team, but I kind of knew coming into the game they were in trouble if they didn’t hit a bunch of 3-pointers.

“It was sort of like last year, where Janesville’s strength was inside play and we were just taller and more athletic.”

After falling behind 14-6 late in the first quarter, the Golden Bears outscored the Wolverines over the next three-plus quarters, 62-34. That included a big third in which they took an eight-point lead.

In the fourth, Angelo Winkel scored six of his 10 points, including a pair of free throws that halted a South O’Brien run. The Winkel brothers also connected on a bucket to make it an 11-point advantage.

“They were a very good team and we knew it was going to be a dog fight, but to get a 20-point win over them feels very good,” Angelo Winkel said. “It feels amazing. I knew we could do it all season, and just to accomplish this and have a chance at the state championship means a lot.”

Marcus Plathe and Kyle Schaaf each had eight, including six by Schaaf in the first 16 minutes.

“In the first half, it was important for us to stay composed and keep the game as close as possible going into halftime,” said Joyce, who has signed with Coe College. “Obviously as the point guard and lead ball handler, that’s exactly what my job is, and it helps to have the experience that I do have. We also had guys step up which is exactly what we needed.

“Without them, we lose that game.”

Cade Winkel, who is headed to Briar Cliff University in the fall, made the biggest defensive play of the game on a block of a Jackson Louscher layup attempt. Louscher finished with a game-high 22 points, but was the lone South O’Brien (21-4) player in double figures.

He also battled foul trouble, picking up three in the first half, forcing him to the bench for an extended period. That’s where Joyce stepped in along with Schaaf, who hit a pair of 3-pointers to supply the offense.

“The first half was frustrating,” Cade Winkel said. “Jackson is one of the best players in the state and draws a bunch of fouls, but I knew that he was running out of gas and that we just needed to stay calm and let themselves run out of energy running around in 2-3 zone.”

The Golden Bears will bring a 11-game win streak into the state tournament, with each of the last six victories being by no fewer than 17 points.

“The run we went on in the second half was one of the more exciting experiences I have personally had in my career,” Joyce said. “The realization that we can win this game was very special. Going back to state means a lot to me. All the hard work this team has put in during the year and in the offseason really shows.

“Also, all the work I’ve put in with my dad (Pat) and my sister (BGHS girls starter Molly Joyce) makes this even more special. This is a great accomplishment, but this team isn’t satisfied and we want to win three more games.”

The 1A quarterfinals are scheduled for Monday, March 9 beginning at 9:30 a.m.