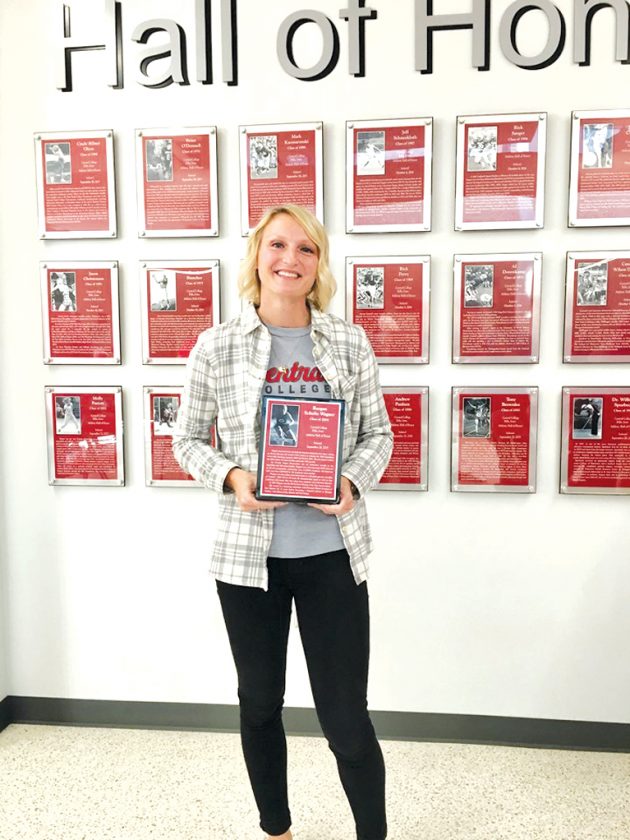 Raegan (Schultz) Wagner was never alone when she stepped on the track.

In fact her best friend was always by her side while competing in high school and college.

Wagner and her twin sister, Lindsay, are 2000 Manson Northwest Webster graduates who continued their careers with the Central College track and field teams in Pella.

“I am extremely honored to be a part of this group of athletes,” Wagner said. “Central College has played an integral part in shaping who I am today due to its focus on educating the whole student athlete — mind, body and spirit.

“I truly loved my experience at Central College. I have so many great memories and friendships as a result of my time there.”

The Barnum native was an 18-time league placewinner, setting conference records in the heptathlon and 100-meter hurdles.

Wagner was a team co-captain in 2004 and was Central’s MVP in 2002 and 2003. In 2004, she received an NCAA postgraduate scholarship and was a first-team CoSIDA Academic All-American. She was a two-time USTFCCCA All-Academic team honoree.

She wasn’t only a track athlete at Central, she was also a three-time letterwinner in volleyball. Wagner participated in two NCAA Division III tournaments and was a member of Central’s 2000 Division III championship squad as well as four conference title teams. The MNW graduate was a three-time academic all-conference winner.

To cap off her athletic career, Wagner won the 2004 NCAA Iowa Woman of the Year Award, based on excellence in academics, athletics and community leadership.

In her senior season for the Dutch, Wagner won the national championship and set the Div. III points record.

“I don’t think that would have happened without my twin sister Lindsay there with me the whole way,” Wagner said. “Lindsay finished in the runner-up position our senior year.

“We have competed against each other and supported each other since a very young age — no matter the outcome, we were and still are each other’s biggest fan.”

The MNW graduate won a state title in the shuttle hurdle relay in 1999, and was a medalist in the 100-meter hurdles her senior year.”

Wagner is currently a financial advisor at Morgan Stanley, with offices in both Fort Dodge and Des Moines. She is business partners with former Central teammate Matt Jens.

The MNW graduate resides in rural Cambridge with her husband Peter and their three young children.