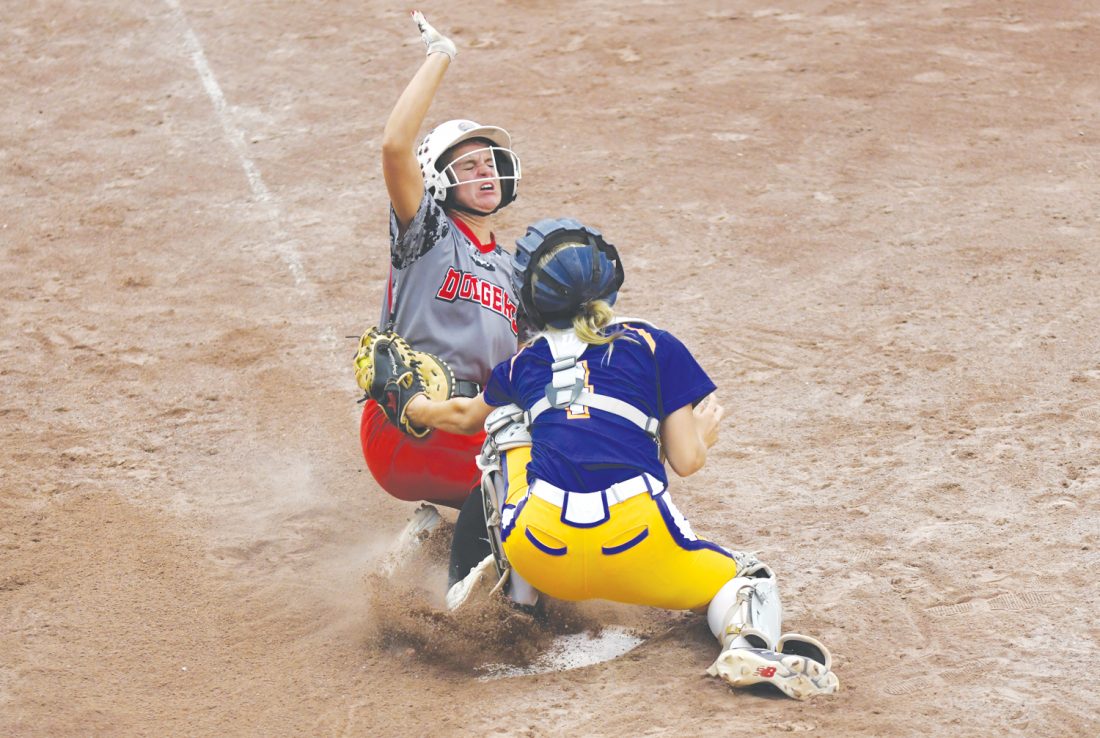 Fort Dodge got the test it wanted from Indianola on Tuesday, as the top-ranked (Class 5A) Dodgers finally put the Indians away with two late runs to prevail 4-1 in the regular-season finale for both programs.

Nothing came easy for Andi Adams’ squad in their final time on the field before a regional championship in seven days back at Rogers Park. After Senior Night festivities and a rain delay, Fort Dodge (25-3 overall) fought its way through a few tense moments both on the injury front and the scoreboard to come out on top.

“We knew we were going to get challenged like this,” Adams said of the 14-5 and No. 12 Indians, who were cleared to play for the first time on Tuesday following a two-week COVID-19 quarantine period. “Indianola’s the kind of 5A program that we normally face a lot but haven’t seen as much this year, and we figured they would be fresh and hungry after being off for so long.

“They have some very talented players, and this game could’ve gone either way at a couple of different points. We got two early runs (in the first inning), then made some big plays that fortunately kept us ahead until the end.”

Standout shortstop Tory Bennett injured her ankle and had to leave the contest, while all-state pitcher Jalen Adams got hit in the shin by a line drive before deciding to stay in the game. It was the kind of situations the FDSH coaching staff both feared and embraced with the postseason right around the corner.

“We knew we were running that risk by playing (Indianola was a last-minute replacement when Carlisle decided not to come to Fort Dodge),” Adams said. “But that’s how it works at this level. Games are intense. Sometimes you get banged up and have to play through it. We didn’t want to have 11 days off, especially knowing we weren’t going to face Ames on Saturday (in a regional semifinal; the Little Cyclones cancelled the rest of their year after a positive COVID test).

“To get pushed like this by a Top-10 level 5A opponent was a little eye-opening and honestly, we needed it.”

The Dodgers plated two runs immediately on RBI singles by Tristin Doster and Bennett. IHS ace Kate Kralik calmed down after that, though, and got locked in a pitcher’s duel with Adams the rest of the way.

Fort Dodge managed only one more hit until the sixth, when it tacked on two insurance runs.

Things got dicey for the Dodgers in the fifth. Holding a precarious 2-1 advantage, Adams was in a bases-loaded jam when Selia Becker of Indianola hit a soft liner toward shortstop.

Sophomore Martyne Lowrey, who had taken over for the injured Bennett two innings earlier at shortstop, made a diving catch in the dirt to end the inning and the threat.

“We talk all the time about stepping up for your teammates and picking them up when your number is called,” Adams said. “If Martyne doesn’t make that play, we’re suddenly behind. You have to deliver in those game-changing moments if you have the kind of expectations we do (moving forward).

“From here on out, we’re going to see tough pitching, solid defense and talented hitters. We’re not just going to be able to walk all over teams. We’ll have to execute, especially in those situations where things could go either way.”

Doster was 2-for-3 with two runs scored. Lowrey added an RBI single in the sixth, as Fort Dodge plated a pair of unearned runs. The Dodgers struck out 10 times against Kralik.

Adams (17-1) whiffed nine of her own in the six-hitter. The run she allowed in the fourth was unearned, and she stranded nine Indian baserunners.

Schnetzer, the school’s career home run leader, is tied for the state lead in long balls with 9 and has a 5A-best 45 RBI.

“I can’t say enough about Loghen and Katelyn,” Adams said. “They’ve provided the kind of senior leadership that has always been the backbone of this program and our most successful teams on and off the field. It’s been a different year to say the least, but we appreciate what they’ve done and meant to us in setting the tone at the top.”

The Dodgers will face either Sioux City East (8-12) or Sioux City North (8-10) for the Region 1 championship on Tuesday at 7 p.m. inside Rogers Park.