St. Edmond does it again 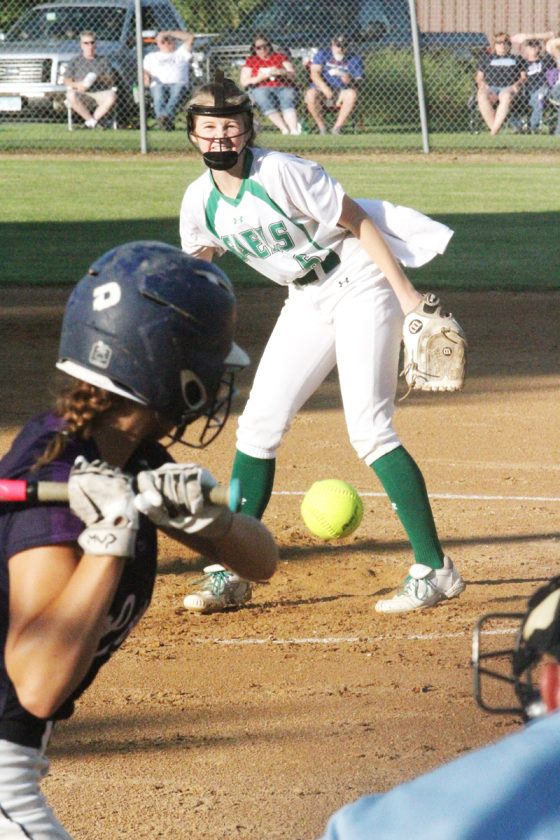 CLEGHORN — Trailing 2-0 in the fourth inning of their Class 1A, Region 1 quarterfinal contest on Wednesday, the St. Edmond softball team needed a momentum shift.

Junior Ella Vratny delivered the game-changing moment — not with her arm, but with her bat.

Vratny — the Gaels’ pitcher — hit the first home run of her varsity career to get her squad on the board, and the offense rallied with three runs and four more hits in the frame to fuel a 4-2 victory over Marcus-Meriden-Cleghorn/Remsen Union.

The Gaels (6-9 overall) advance to meet traditional state power and seventh-ranked Akron-Westfield (15-2) in a regional semifinal on Friday night. First pitch is set for 7 p.m. at A-W High School.

The Westerners have qualified for state 14 times in the last 16 seasons, and have captured six championships during that stretch.

Vratny had appeared in 96 varsity games throughout her four-year career, and logged 192 plate appearances before last night’s contest. She’s had a successful offensive season at the plate in 2020 — Vratny is batting over .430 — but she’d never gone deep before.

“That was a big deal. It really got us fired up,” first-year SEHS head coach Bill Shirbroun said. “We needed something to get us going. After that, we just started stringing hits together and you could see the confidence building. Hitting is contagious, and our fourth inning was a perfect example of that.”

Alyson Nieland (double) Anna Kolacia (single) followed with hits of their own, and freshman outfielder Ashlyn Headlee delivered a two-run single to put the Gaels up for the first time at 3-2. Senior Jocy Timmerman added an RBI single later in the frame.

Vratny did the rest, striking out two and scattering eight hits in her complete-game effort. The Gael defense didn’t make an error behind her.

“Our defense was very solid,” Shirbroun said. “We talk all the time about getting the easy ones first. If you do that and avoid (self-inflicted mistakes), you usually put yourself in a position to win.

Timmerman, Vratny and Kolacia registered two hits each. Every Gael in the order recorded at least one hit.

“We introduced some new off-speed pitches (in the offseason) to Ella, and she’s been working hard on them,” Shirbroun said. “You can see her confidence growing, and she’s throwing them for strikes at any count. That wasn’t always the case (earlier in the year). She’s keeping (the opposition) off balance.”

Shirbroun admitted he “felt some nerves” both before the game and when the Gaels fell behind early. But his team “stayed loose and upbeat.”

“We just played winning softball,” Shirbroun said. “Timely hitting, aggressive baserunning, good pitching and strong defense is the right combination. I’m very proud of this group and what they’ve been able to accomplish (with consecutive 4-2 tourney victories after a 4-9 regular season).”