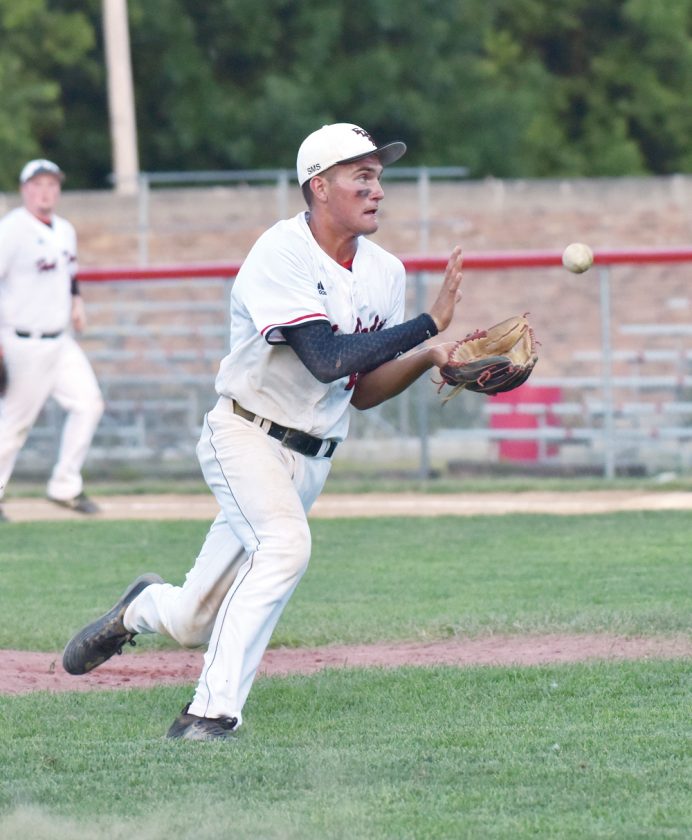 —Messenger photo by Britt Kudla Fort Dodge’s Mason Bockoven makes a play at third base for the Dodgers. For more photos, visit CU at messengernews.net

It took the Fort Dodge baseball team over 11 innings and nearly four hours to get going on Wednesday.

Once the Dodgers did, a split with arch rival Mason City was on the table.

The Mohawks had other plans, though, staging a late rally to counter FDSH’s comeback and ultimately skip town with a doubleheader sweep.

Head coach Blake Utley’s squad, which had won 11 of 13 prior to last night’s long twinbill, looked lethargic through the opener and well into the nightcap. The Dodgers (11-7 overall) trailed 4-0 in the fifth inning of the second contest after being blanked in the first affair.

A six-run surge put Fort Dodge in prime position to salvage something out of the evening against the Mohawks (11-7). But in its final at-bat, Mason City erased a 6-4 deficit with a pair of runs to force extra innings.

A run in the eighth wound up being the game-winner.

In the opener, the Mohawks plated three runs early and then broke things open in the fifth on a grand slam by Connor Wieman. The second baseman finished 3-for-3 with six RBI.

A two-run single by Mason Bockoven was the highlight during the Dodgers’ six-run fifth to spark the game-two comeback, as the home team grabbed a 6-4 advantage. Carson Peterson had an RBI single, and Easton Cone drew a walk with the bases loaded. Eli Elsbecker also contributed an RBI single.

Bockoven worked into the seventh, but ran into some trouble after allowing a single and a walk. A run-scoring single by Alex Gold and a sacrifice fly by Isaiah Washington knotted the score and extended the ballgame.

Fort Dodge had the winning run at second base with no one out in the bottom of the seventh, but a pick-off play quelled the rally. Mason City grabbed the upper-hand back at 7-6 in the top of the eighth, but the Dodgers again appeared ready to answer when Elsbecker led off the bottom of the frame with a double.

Nelson Cone moved Elsbecker to third with a sacrifice bunt. A strikeout left lead-off man Tyler Schreier up for a last-ditch effort.

Schreier tried a squeeze bunt, but Elsbecker was thrown out at home to end it.

Connor Dalen was 2-for-3 with a homer and three RBI for the Mohawks, who plated four runs in the first before Bockoven settled in and fired five consecutive shutout innings. Bockoven was 3-for-4 offensively with a pair of RBI, and he struck out seven on the mound.

Elsbecker chipped in a pair of hits.

The doubleheader took over five hours to complete.

Fort Dodge is back in action on Saturday at sixth-ranked (Class 4A) Sioux City East.