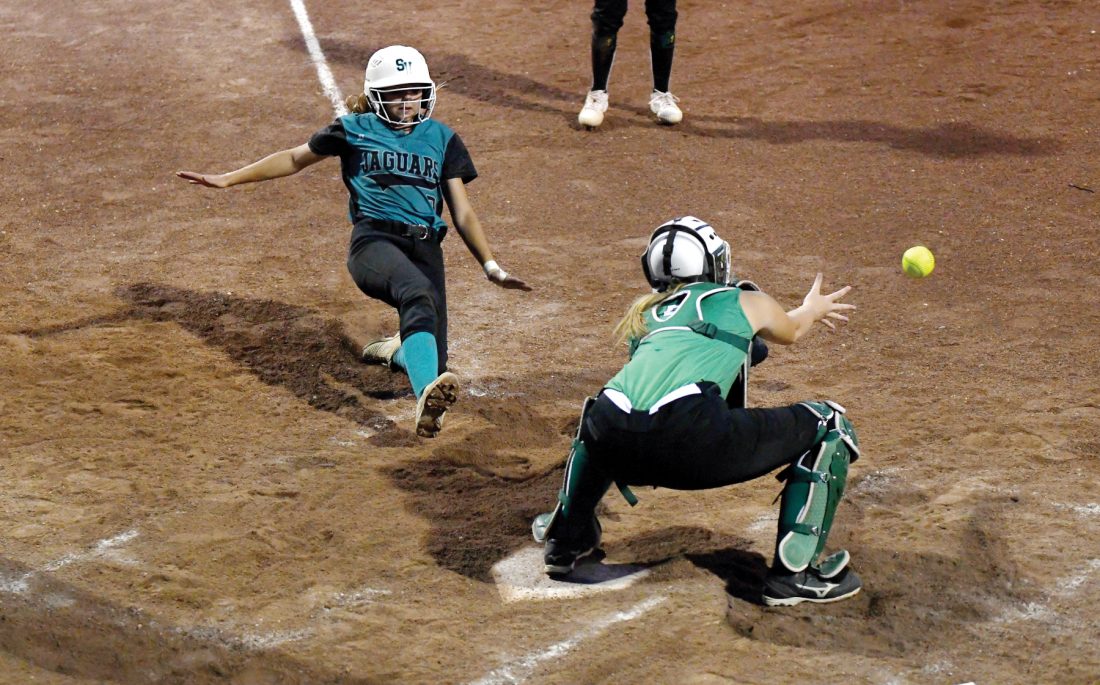 Jordyn Rowley hasn’t set foot in Southeast Valley High School yet, but on the softball diamond, she continued to play like a crafty veteran Tuesday night at Rogers Park.

With the Jaguars up 3-0, Rowley entered the box with the bases loaded. The designated player then ripped the first pitch she saw in the gap and to the fence for a triple, clearing the bases.

The rally started with a bases loaded bunt from Cassi Berglund. The senior struggled at the plate all night, but laid down a bunt that plated Ellie Nolte to set up Rowley’s blast.

Rowley was a home run shy of the cycle and drove in five runs for the Jaguars.

“We played with confidence,” said first-year head coach Sheridan Gealow. “We were patient at the plate. We had to make adjustments to speed, coming off of (Monday’s game).

“Jordyn had a big night at the plate and came up with a huge hit.”

“We didn’t have any timely hits,”said SEHS head coach Bill Shirbroun. “We weren’t able to knock anybody in when we had our opportunities.”

Gael junior pitcher Ella Vratny and Jaguar senior Kenzie Crampton put on a pitching clinic for most of the contest. Crampton threw four innings of three-hit ball. She struck out and two and walked zero.

Jag freshman Maddie VanSickle relieved Crampton in the fifth, allowing no hits and striking out three the rest of the way.

Vratny, who had 11 strikeouts on Monday in a win at Iowa Falls-Alden, fanned eight batters and allowed six hits. The junior gave up a two-run single to Rowley in the fourth and worked her way out of jams in the fifth and sixth.

In the fifth, the Jaguars had runners at second and third with one out. After a comebacker to Vratny, she intentionally walked Crampton and then recorded a strikeout.

In the sixth, Rowley led off with a double and advanced to third after a groundout. With two outs Vratny induced an infield fly.

Southeast Valley junior Emily Jaeschke had a big effort in the field and at the plate for the Jaguars. Jaeschke made two strong defensive plays in center, then gunned down a Gael runner at the plate in the third inning.

Jaeschke was also 2-for-3 at the plate with two runs scored and a double.

“Emily is a smart player,” Gealow said. “Defensively, she is sharp. And she’s patient at the plate.”

Eighth-grader Grace Neuberger drilled a line drive in the third inning for a double, and Vratny also recorded a two-bagger for the Gaels. Kaili Henning had the only other St. Edmond hit.

Jocy Timmerman was honored before the contest as the lone 12th-grader for Senior Night. After last night’s contest, Timmerman is batting .387 in her career. She has 153 hits in 123 games played, with 63 runs scored, 31 doubles and 74 RBI.

Timmerman has committed 16 errors in 766 chances for a fielding percentage of .980.

“First of all, Jocy shows great leadership,” Shirbroun said. “Since I’ve been here, she has been at every practice and every volunteer practice. She gives 100 percent.

“Jocy has passed on these leadership skills to the younger players, and I hope they pick up what she has been providing.”

Timmerman will play softball at Central College next season.

The Gaels are back in action on Thursday when they travel to Hampton-Dumont for a varsity only contest that will begin at 6:30 p.m.