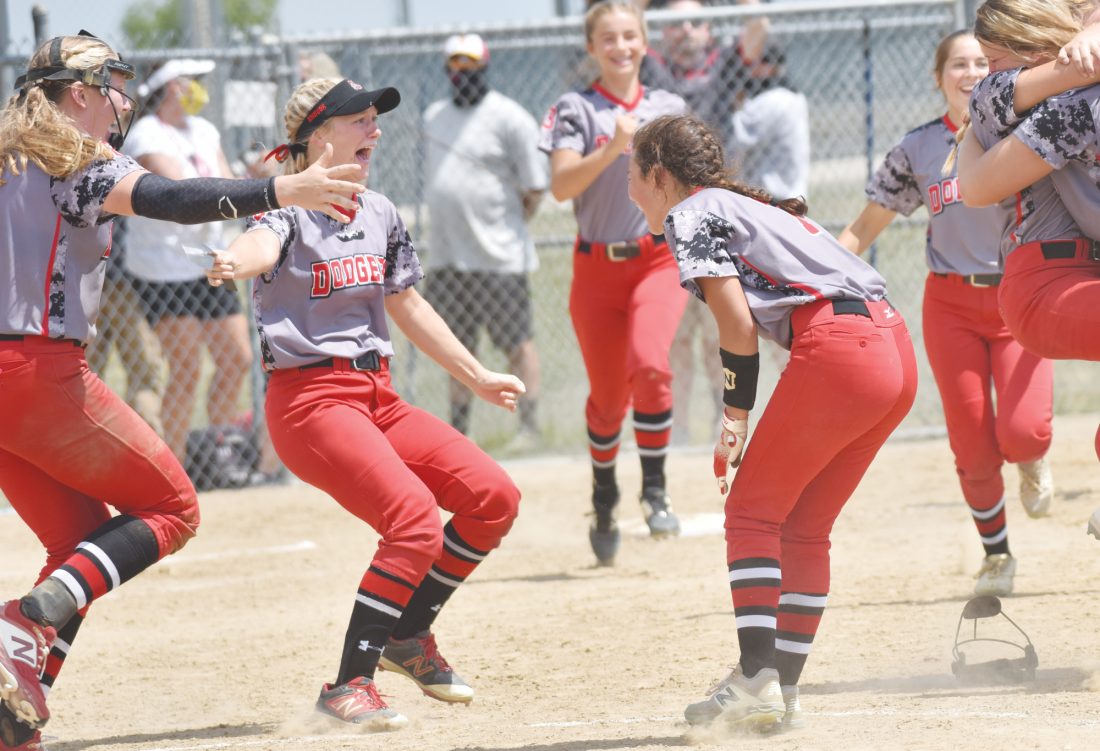 The little team that could is all grown up and making history.

Top-ranked Fort Dodge took a groundbreaking step into uncharted territory at the state softball tournament on Wednesday, defeating Ankeny Centennial by a 5-3 final on a sweltering afternoon at Rogers Park to reach the championship round for the first time ever.

The expectations and pressure have never been greater for head coach Andi Adams’ squad as the No. 1 seed in Class 5A, but the Dodgers (28-3 overall) continue to embrace the narrative of the underdog — both on paper and in stature. Few players embody that persona quite like Martyne Lowrey, Fort Dodge’s diminutive infielder who packed a huge punch when it mattered most in a clutch semifinal moment against the fifth-seeded Jaguars (22-9).

With the score tied at 3 in the bottom of the fifth inning and over 1,000 fans anxiously watching at the jam-packed Dodger Diamond, Lowrey — a sophomore who is maybe 5-foot-2 in her cleats — gave the Dodgers the lead for good with a laser beam that cleared the fence in left field. It was the first home run of Lowrey’s three-year varsity career, which spans nearly 150 official at-bats.

“She hits those frozen ropes every once in a while. I’ve seen her do that before (in spring ball),” Adams said. “Martyne gets dialed in and finds her pitch, and she’s got that line-drive swing. She won’t hit many (homers), but she’s definitely had a few gap shots (for doubles). That one just kept going.

“I call them our ‘original littles’ (the current sophomores who have been on the varsity roster for all of FDSH’s state tournament appearances in each of the last three seasons). I was checking through my phone afterward, going through the nearly 100 messages I had. A lot of them said, ‘who was that small girl who hit the home run?’ That’s just the nature of this group: you may not think much about us, because we aren’t physically intimidating and we don’t have a dugout full of players. But they find a way.”

Lowrey’s long ball was the final momentum swing in a contest full of them. Every time the Dodgers appeared to create separation, Centennial responded. And just when the Jaguars looked poised to rain on the host school’s tourney parade, Fort Dodge countered with a clutch at-bat or an impressive defensive stop.

“We just all try to do whatever we can in our own way,” Lowrey said. “I look at my (own role) as someone who tries to get the team going and keep a positive attitude. But we all have our (responsibilities), because Coach (Adams) talks about how that all adds up in the end. I have confidence in myself, and I was really excited because I knew it pumped the team up when (the outcome) was still (in doubt).”

Centennial struck first with a run in the opening inning. The Dodgers immediately answered, as Tory Bennett walked and Tristin Doster sent a stinger over the wall in right-centerfield for her eighth home run of the year.

Doster, an all-state catcher, nearly tripped running down the line as the ball cleared the fence and her adrenaline crescendoed. The junior then emitted that energy as she rounded the bases, and all of the early Jaguar momentum switched sides.

“That got us going,” Adams said. “It was great to see players like Tristin, Martyne and Tory (Bennett) step up (Wednesday), the way Jalen (Adams), Haley (Wills) and Chloe (Wertz) did (in the quarterfinals on Monday). The more balance we show, the more dangerous we can be.”

“That’s a tough team with a lot of firepower,” Adams said of Centennial. “We knew we were in for a dogfight. And we had to punch back every time they (pulled even).”

Lowrey again delivered a pivotal hit in the bottom of the sixth with the Dodgers hanging on to a precarious 4-3 lead. Her single down the left-field line on an 0-2 pitch plated Doster — who scored three times — to make it 5-3.

The Jaguars went down in order in the seventh, as Jalen Adams secured her 20th victory of the season. Adams wasn’t nearly as dominant as she had been versus Bettendorf, but the sophomore right-hander still did plenty, tossing a complete game and allowing only two earned runs.

Now — in the program’s 49th year of existence and 16th state appearance — the Dodgers will finally take the field in the championship round. Fort Dodge hasn’t played in the state finals against a single opponent in any girls sport since the 1991 girls basketball title contest against Cedar Falls.

“It’s just been a crazy year,” Doster said. “Unlike any other. From not knowing if we were going to play at all to this, which has always been one of our biggest goals. We’ve worked really hard to get to this point, and we’ve done it together every step of the way, so that’s how it’s going to be again (on Thursday).

The Dodgers’ opponent — second-ranked and second-seeded Cedar Rapids Kennedy — is also in an unprecedented place as a program. The Cougars routed Muscatine in the other semifinal game, 9-0, to reach their first championship in softball as well.

Kennedy is 25-1 and winners of 19 consecutive contests. A year ago, the Dodgers defeated the Cougars in the consolation round at state, 8-0.

First pitch on Kruger Seeds Field — Diamond 1 — in the 5A championship is set for 5 p.m. on Thursday.

“These kids are so ready to play (in the finals) for this community,” Adams said. “That’s what it’s all about for them: they feel like they’re doing this for all of Fort Dodge. Given everything going on (away from the field), we treat this as a gift. Something positive and inspiring, which every town could use a little more of these days. We’re just making the most of the hand we’ve been dealt.

“I can’t say enough about how fortunate we are, from the IGHSAU and the city and (Rogers Park) grounds crew all the way through the support from (FDCSD superintendent) Dr. (Jesse) Ulrich, (FDSH athletic and activities director) Kevin (Astor), the other administrators, my incredible assistant coaches and (trainer) Bre (Drees), the kids in the dugout who inspire us in their own way, all of the local businesses, and of course our fan base…the love and encouragement we get is second to none. It’s why we do it, and it’s why I love Fort Dodge.