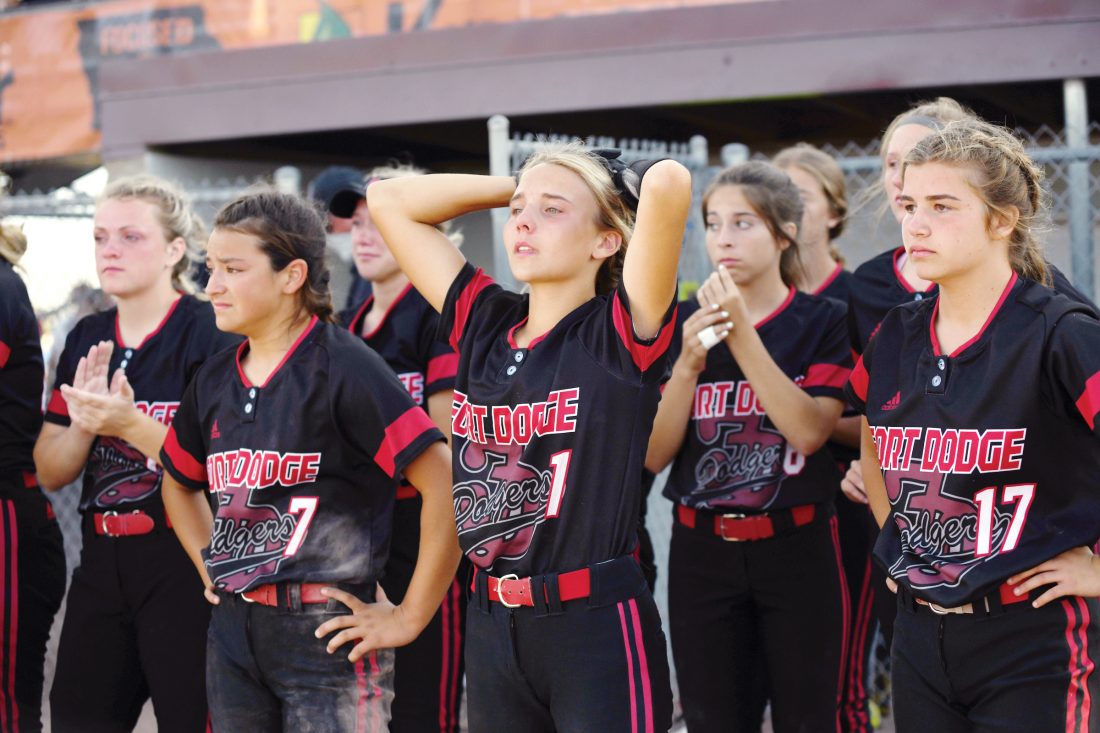 Messenger photo by Britt Kudla: Fort Dodge players look on after their 5-1 loss to Cedar Rapids Kennedy in the state championship game on Thursday at Rogers Park. For more photos, visit CU.messengernews.net

Messenger photos by Britt Kudla Fort Dodge players look on after their 5-1 loss to Cedar Rapids Kennedy in the state championship game on Thursday at Rogers Park. For more photos, visit CU.messengernews.net

Messenger photo by Britt Kudla: The Fort Dodge softball team POSES with their STATE runner up trophy in Class 5A. The Dodgers lost to Cedar Rapids Kennedy 5-1. For more photos, visit CU at messengernews.net

Messenger photo by Britt Kudla: Fort Dodge players look on after their 5-1 loss to Cedar Rapids Kennedy in the state championship game on Thursday at Rogers Park. For more photos, visit CU.messengernews.net

Messenger photo by Britt Kudla: Tory Bennett of Fort Dodge makes a play at second against Cedar Rapid Kennedy during the Class 5A championship on Thursday at Rogers Park.

They took turns hugging each other, one by one. Long embraces. Sharing a lot of tears, meaningful words and even a few smiles.

It wasn’t as much the championship loss that had the Fort Dodge softball team feeling particularly emotional, but rather, the reality of the finality. The 2020 season reached its conclusion, and this group of Dodgers — occupying a space with no peer in program history — had to say goodbye.

Second-seeded Cedar Rapids Kennedy was simply too much for No. 1 FDSH on Thursday evening at Rogers Park, as University of Nebraska recruit Kaylin Kinney sealed her legendary state tournament status by firing a three-hit complete game in a 5-1 Cougar victory.

Led by six hungry senior starters bound for college softball — with the Div. I Kinney as the linchpin — Kennedy earned its first-ever championship on the diamond to complete a 26-1 campaign and a dominant week in Fort Dodge. A four-run third inning gave Kinney all the support she would need against the Dodgers (28-4), who were also making their maiden voyage into the finals as a large contingent of hopeful hometown fans cheered them on.

“She was on fire,” FDSH head coach Andi Adams said of Kinney. “She’s up there throwing 66 (miles per hour) consistently, even touching 67 or 68. We got beat by a graduated senior who is going to be in Lincoln for school here in a few weeks, getting ready for Big Ten softball. That’s all there is to it. Sometimes, you have to tip your hat to a player like that and a team full of upperclassmen who want it the way they did. 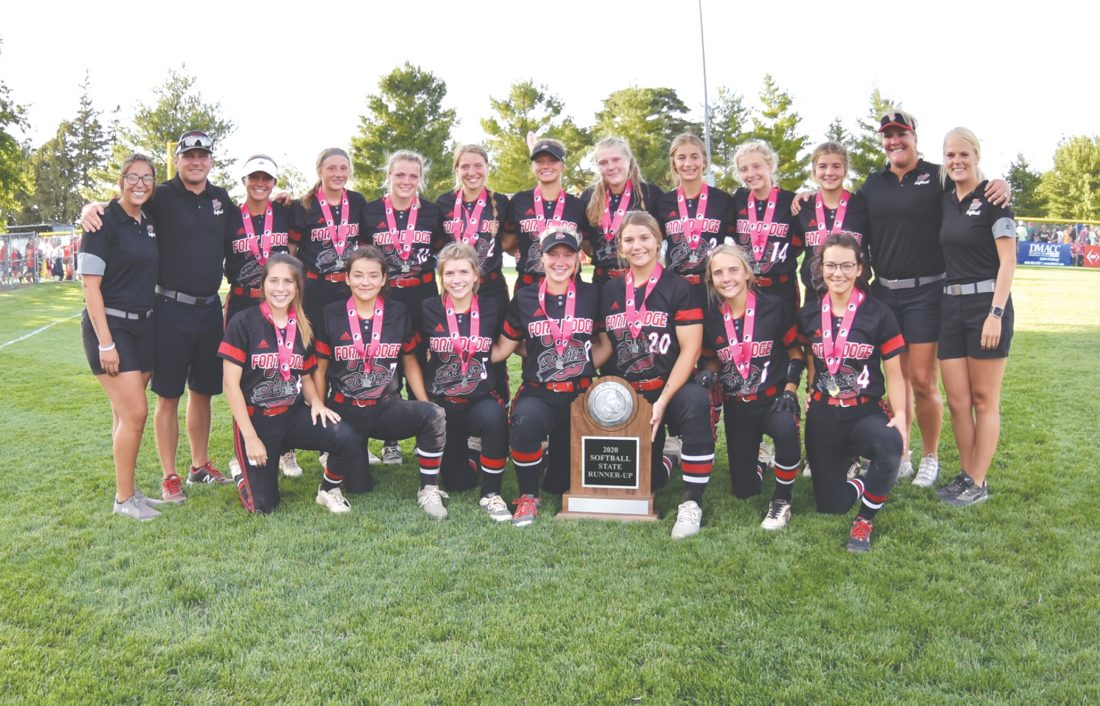 Messenger photo by Britt Kudla: The Fort Dodge softball team POSES with their STATE runner up trophy in Class 5A. The Dodgers lost to Cedar Rapids Kennedy 5-1. For more photos, visit CU at messengernews.net

“The goal, for us, is to be that group (in the years to come). Not just in the way we perform, but the way we carry ourselves. We have to take something away from this experience, because (on Thursday), we saw what that next level of (high school) softball is all about. We have to turn to each other and say, ‘we want that.'”

The Dodgers boasted Class 5A-best numbers in a handful of team and individual categories coming into the tournament, and the offense didn’t disappoint in victories over Bettendorf and Ankeny Centennial as they reached the finals for the first time in school history. Kinney wasn’t fazed by any of that, though, as she surrendered only two bunt singles and a soft liner for a hit in the seventh.

“I honestly think they would’ve beaten anyone this week,” Adams said of the Cougars, who drubbed Pleasant Valley, Muscatine and FDSH at state by a combined run differential of 24-5. “They were on a mission, especially after what happened last year (Kennedy was upset in the first round, then lost to the Dodgers 8-0 on the consolation side). That obviously fueled their sense of urgency.

“It doesn’t take anything away from our kids, or what they’ve accomplished. It’s been a tremendous story. Inspirational. But it’s time to get tougher, more mature, and more consistent in our execution (collectively) as a team. You have to keep learning. Keep growing. And you have to take something away from every experience, even after getting this close. It hurts, but it also has to be the motivation to find that next gear moving forward.”

Sophomore all-stater Jalen Adams — one of three Dodgers to make the 5A all-tournament squad — had the lone RBI for Fort Dodge in the bottom of the third. Trailing 4-0, the Dodgers loaded the bases with no one out as Malia Lowrey and Chloe Wertz reached on consecutive bunt singles and Sophia Klinger was hit by a pitch. 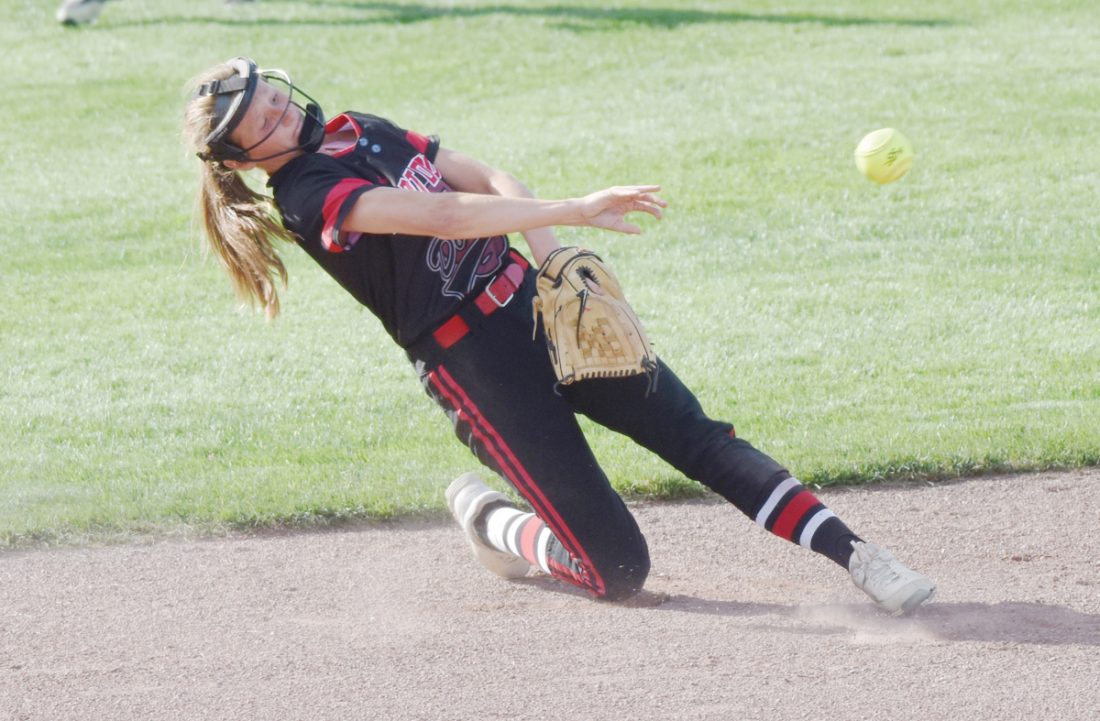 Messenger photo by Britt Kudla: Tory Bennett of Fort Dodge makes a play at second against Cedar Rapid Kennedy during the Class 5A championship on Thursday at Rogers Park.

Adams had a run-scoring groundout, and Tory Bennett reached on a fielder’s choice. With runners at second and third, Tristin Doster lined out to third base, and Kinney had escaped her only jam with only one run allowed.

Lowrey’s single to left with two outs in the seventh was the only hit to leave the infield against Kinney, the 2019 Gatorade Iowa Softball player of the year who finished her senior season 12-0 with an 0.39 earned run average. Kinney was named the all-tourney captain.

Sophomores Haley Wills and Martyne Lowrey joined Adams on the 5A honor list for the week. While Kennedy started six seniors and three juniors on Thursday, the Dodgers’ lineup included just one senior, three juniors and five sophomores.

“This is all part of the process,” Adams said. “We took a big step forward as a program. We put ourselves in position.

“We also talked afterward about how we’ve created a bond and a sisterhood that will travel with us wherever we go. That’s something we will always cherish, far beyond (the result) of this game. In the bigger picture, that’s the perspective these girls care about — and the love we have for each other.”

Loghen Schnetzer — the school’s career home-run leader — and Katelyn Werning are the lone seniors graduating from the FDSH roster.

“But I don’t want to look ahead yet, because I have to thank both Loghen and Katelyn for being the kind of seniors we needed,” Adams said. “In an uncertain season with everything COVID related, it was important that we were going to get positive energy and stable leadership from the top. And we did.

“Loghen developed into a nurturing, hard-working, mature player. And I know things didn’t necessarily go the way Katelyn had envisioned, but she stuck with it and really helped us out in so many ways. She’s a great person and I absolutely respect her. I’m very proud of both of them. I think you see (with the reaction afterward) how much they all mean to each other. And in turn, that means a lot to me. I’m proud to be a Dodger.”

Fort Dodge was appearing in its first championship for a girls team sport against a single opponent since the 1991 basketball finals against Cedar Falls. On the Kennedy side, the Cougars became the first Cedar Rapids school in 22 years to capture the state softball crown.