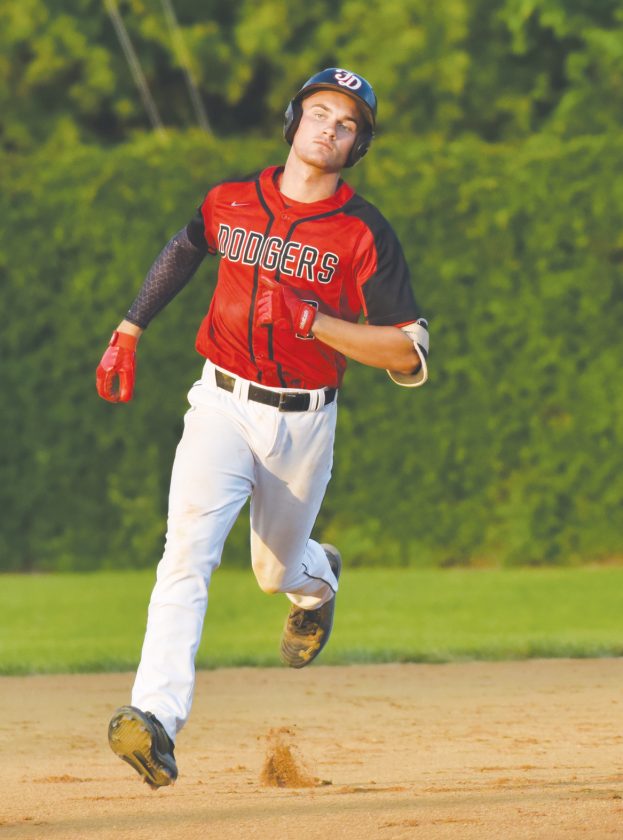 —Messenger photo by Britt Kudla Fort Dodge’s Mason Bockoven makes a play in the field for the Dodgers against Des Moines Roosevelt on Monday at Ed McNeil Field. For more photos, visit CU at messengernews.net

When Mason Bockoven walked off of Ed McNeil Field on Monday night, he had no idea exactly what he had just done.

The type of performance Bockoven put on, was a once in a lifetime feat in more ways than one.

“I knew I had a good game, but I didn’t know exactly how many RBI it was,” Bockoven said. “I was seeing the ball well. I have been putting in a lot of work all season long. Doing extra things before and after practice.

“I want to thank my teammates for being on base.”

In the doubleheader against Des Moines Roosevelt, Bockoven swatted three home runs and drove in 12 runs — a school record for a doubleheader.

“My motto has always been work hard and stay humble,” Bockoven said. “I just want to stay level headed. Coach (Blake) Utley and the other coaches have done a great job of building us up.”

The Dodgers (6-4 overall) walked off the field with the doubleheader sweep. In the first contest with the Dodgers trailing 6-1 heading into the third, Fort Dodge put up a 10-spot, thanks in part to two home runs from Bockoven.

Bockoven’s first shot was off a fastball. When the lineup rolled around again in the inning, Bockoven went to the plate with the bases loaded.

Again, Roosevelt’s Alex Pendergast threw a fastball to the Dodger senior, and with one swing, he cleared the bases.

“Both times he threw me fastballs.”

It didn’t take the Dodger long to keep his momentum going, as he blasted a three-run homer in the first inning of the nightcap.

He finished with 10 RBI off his three home runs and added a sacrifice fly and an RBI-single for five in the second game.

“Mason is an unbelievable kid, who works extremely hard,” Utley said. “He is starting off the year with some nice hits. He has a nice swing going and he does all of the little things. He has started squaring the ball up. All of his home runs were no-doubters.

The Dodgers, who have won six of their last seven games, have hit a rhythm heading into the home stretch.

“It’s great that we have put together a nice little run,” Bockoven said. “We are building confidence and are ready to play anyone.”

The Dodgers had a solid game all around with 28 runs scored and 18 hits.

“They punched us in the face right away,” Utley said. “We settled down and got runners on. For good and bad, hitting is contagious. If you’re not hitting well it’s hard to get going and if you’re hitting well, it’s hard to stop.

“That was a quality Roosevelt team and those were big wins for us.”