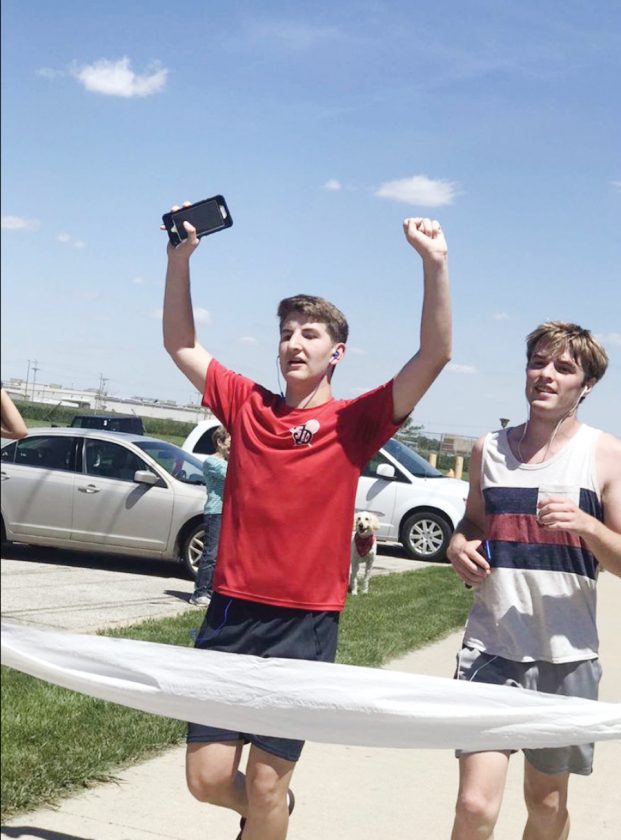 Utley challenged the group to stay the course for their own peace of mind, though. Rather than calling it a year, the students responded in a way their teacher will forever remember.

Twenty-two half-marathoners from Utley’s class finished what they started this past weekend in Fort Dodge, completing the 13.1-mile trek together through the virtual “Running Is Not Cancelled” event out of Sacramento, Calif.

“The kids were training for the ‘Dam to Dam’ race in Des Moines and the ‘Gladiator Assault Challenge’ in Boone, and they were just in the process of getting started on their 12-week plan when COVID hit,” said Utley, a 2001 FDSH graduate. “We had a lot of beginners in the group, so it would’ve been very easy for them to just pull the plug and call it good. Asking them to get to the point where they could complete a half-marathon is a pretty tall order, given we were done meeting in person and it became totally voluntary.

“We gave them all the option to keep going, knowing they’d still get their PE credit for the course no matter what. We set up a group chat, and the kids started pushing each other and holding each other accountable. I talked to the school about how much virtual races had been taking off, so we found this and decided to give it a try.”

Senior Dan Leigh, one of the students in Utley’s class, was impressed by the positive collective response once momentum started to build.

“We just focused on motivating each other and kept the positive feedback going,” said Leigh, who will attend Iowa State University in the fall and major in business. “Running 13.1 miles is a big feat. At the beginning, it sounded like an impossible goal. But when you realize you’re not going to be on your own, it really gives you the drive to keep up the pace for the good of the group.”

Utley contacted the “Running Is Not Cancelled” director in Sacramento, and the Fort Dodge students were cleared to enter at the last minute. Shirts, race bibs and medals were ordered.

“The kids picked everything up and ran (last) Saturday,” said Utley, who has been a physical education teacher at FDSH since 2007. “Because of the rule changes (due to the coronavirus), I wasn’t able to be there in person, which was the only bummer. But seeing the pictures and texts as they were finishing, and knowing some of the parents got involved to help cheer them on and turn it into a ‘race day’ atmosphere…I have to say, it’s one of the highlights of my teaching career. I was so incredibly proud of them. A really inspirational story.

“It gives me chills just talking about it.”

After participating in his first marathon almost on a whim in January of 2009, Utley decided to work the half-marathon into the course curriculum at FDSH.

“I’d never done anything like this. I sent a message to Nick Vinson in 2008 kind of out of nowhere, saying, ‘hey, let’s go run in a marathon,” said Utley, the Dodgers’ head baseball coach and a football assistant. “We flew to Phoenix and it was an incredible experience. I read a book Coach (Matt) Miller gave me called, ‘The Non-Runner’s Marathon Trainer,’ which had information, stories and techniques about a class at the University of Northern Iowa.

“It sparked a lot of ideas on how we could implement this (at FDSH) and get the kids involved. And they really rallied around it.”

“We didn’t have it last year for the first time, and I thought we’d kind of lost the momentum,” Utley said. “But seeing what these kids just did really gets me fired up all over again.

“They were going to get (course) credit no matter what. Some are natural athletes, some aren’t. Some are runners, some aren’t. We have a no-judgment rule; it’s not as much about your time in comparison to others, but whether or not you can finish. And every single one of them did. They pushed themselves out of their comfort zone, and had to do most of it on their own time. Now they can always say they ran 13.1 miles, which is an outstanding achievement.”

Leigh, a tennis player and former swimmer and runner, had competed in 5K cross country races — the equivalent of 3.1 miles — but hadn’t streched himself this far. He’s glad he and his classmates saw it through to the end.

“I’m very proud of what we accomplished together,” Leigh said. “It wasn’t easy. We didn’t have to do it. So much of running — almost all of it, really — is mental. Your body starts aching, but you have to keep going and will your way through it. I feel like that’s kind of what we did (with the class). We never gave up on each other.”