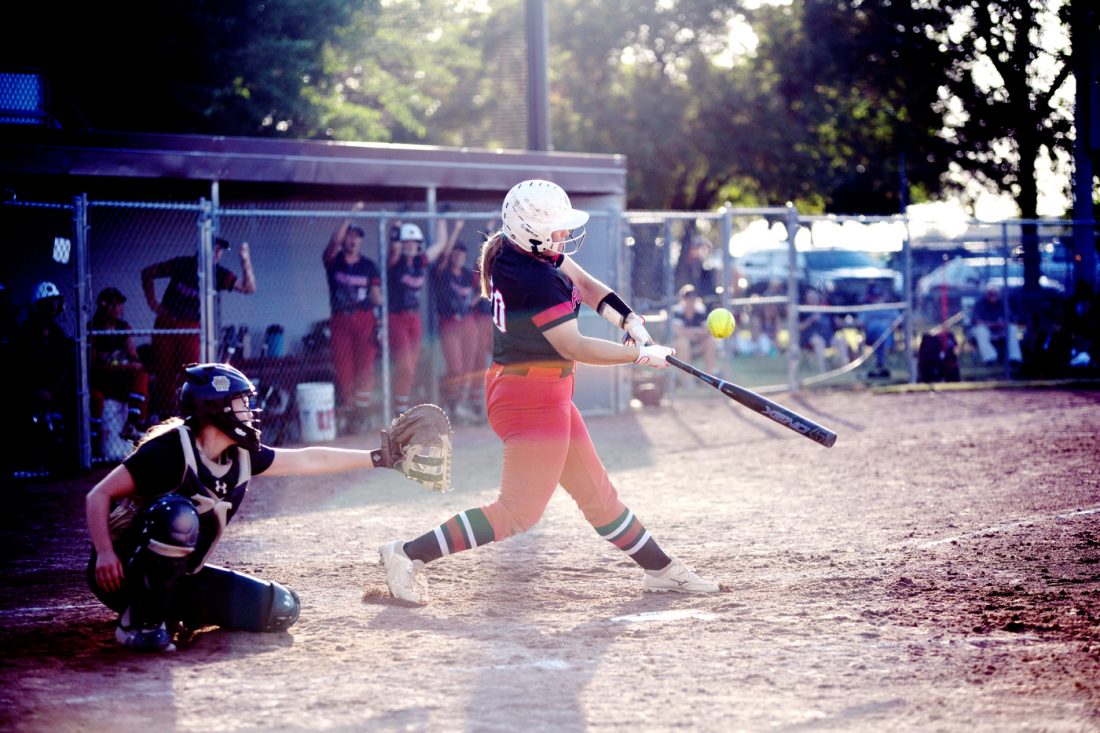 Loghen Schnetzer was in for a big surprise after she rounded the bases during the top-ranked (Class 5A) Fort Dodge softball team’s nightcap against Marshalltown on Wednesday at Rogers Park.

The Dodgers’ senior first baseman had just hit her second home run of the evening and sixth of the season. What Schnetzer didn’t know was that it also happened to be the 31st of her career — a new FDSH program record.

“She had no idea,” Dodger head coach Andi Adams laughed. “Her dad (Dale) asked me recently where she stood (on the all-time charts), and I acted like I didn’t really know. He thought she was close. So I told him that he probably wanted to stay out there (in the outfield) and get any home run balls she hits (on Wednesday), just in case.

“Loghen’s been through a lot and worked so hard in the quiet moments away from the spotlight in the offseason. She’s torn her ACL and had multiple (knee) surgeries. It’s just so great to see her in this kind of rhythm, having fun and being able to enjoy her success. She’s our ‘Mama Lo.'”

Schnetzer now has six home runs, 28 runs batted in, and a .606 average in just 12 games for Fort Dodge (11-2 overall). Her record-breaking longball eclipsed the mark set by former Dodger all-stater and University of Iowa player Mallory Kilian, who went deep 30 times from 2011-15.

“It’s amazing to say the least,” said Schnetzer, an Iowa Central Community College recruit. “I knew I was somewhat close, but I didn’t realize I was only two away from it until I hit both home runs (and it was announced).

“It’s truly an honor to have beaten the record. I look up to Mallory so much. She was an amazing player. This is by far one of my biggest accomplishments, but I’m still going to go out hard at the plate until my final softball game.”

Road-weary Fort Dodge rolled to 11-0 and 12-0 victories over the Bobcats, less than 18 hours after getting home from Ottumwa early Wednesday morning. The Dodger bats struggled in the split with the No. 11 Bulldogs, and Adams gave her lineup a new look, batting Schnetzer second in the order instead of in her typical clean-up role.

“It was both disappointing and understandable to see what Ottumwa did to Loghen (intentionally walking her five times in the nightcap),” Adams said. “We didn’t want to see the bat taken out of her hands again, so we moved her up to give her a little more protection.

“I think that once we get our 5-9 hitters going, we’ll probably go back (to putting Schnetzer in the No. 4 spot). But it never hurts to shake things up a little from time to time. Loghen is in a zone. This is a huge accomplishment, given Mallory is one of our program’s all-time greats.”

Tory Bennett, who moved from the lead-off spot to fourth, went 3-for-3 with three runs scored and three RBI in the opener. Haley Wills homered and was 2-for-3 with two runs and three driven in.

Jalen Adams — like Schnetzer, a .606 hitter through the first 13 games — went 2-for-2 and fired a one-hit shutout with 12 strikeouts in the five innings. Adams, an all-state sophomore, is now 7-1 on the year from the pitcher’s circle with a 0.88 earned run average. She has struck out 69 batters in just 40 innings of work.

The nightcap was again a rout from the start. The Dodgers only had to bat twice, plating six runs in both the first and second innings as the contest ended via the mercy rule in the third. Schnetzer’s record breaker came in her opening at-bat.

Tristin Doster, a first team all-state catcher whoh is now batting .512, was 2-for-2 with two runs scored. Wills, Malia Lowrey and Maia Davis were all 1-for-1, with Wills and Lowrey coming home twice and Davis driving in a pair.

Sophia Klinger, who tallied two hits in the opener, drove in two in the second affair. Aeva Alstott added an RBI single.

“It was great to see so many different players step up and give us the kind of balance we’re going to need,” Adams said. “Haley, Sophia, Maia and Malia all came through. Even getting (freshmen) Aeva and Reese (Pederson, who had an RBI single) some quality playing time will benefit us down the road.

“We had a long talk about keeping it simple and just doing the little things right. We don’t need anyone to try and do more than embrace their own (respective) roles. It’s not a matter of being capable — we know everyone is. It’s just a matter of letting the game come to you.”