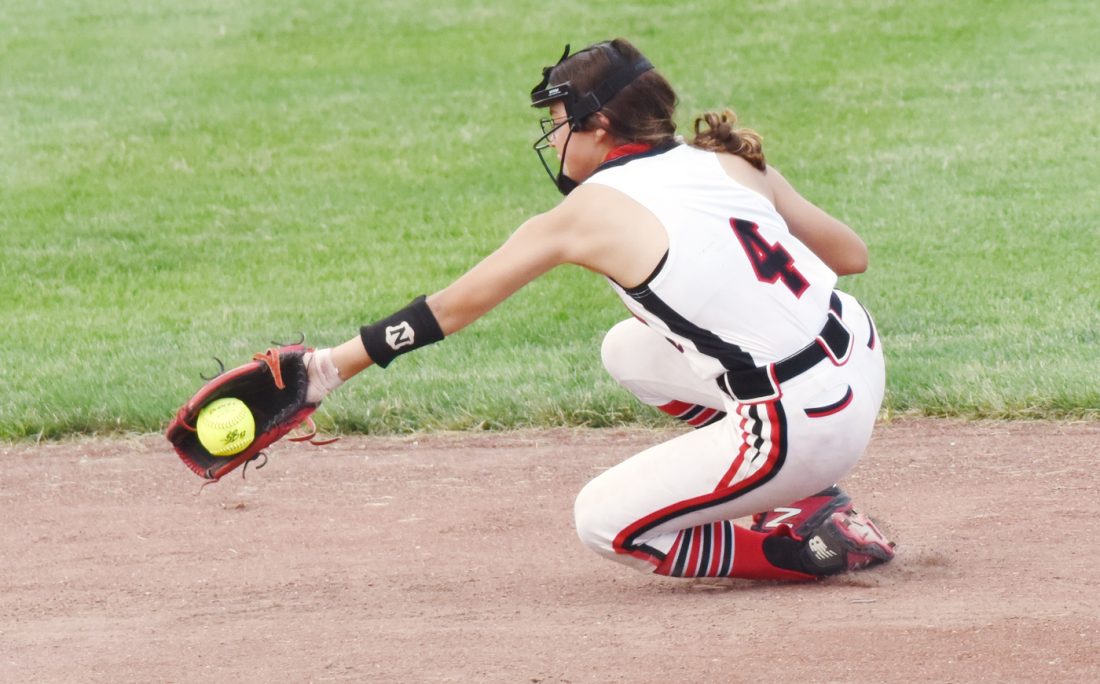 What Andi Adams saw in the second game against Des Moines Roosevelt on Monday is exactly how she wants her top-ranked (Class 5A) Dodgers to play.

Fort Dodge (16-3 overall) won both games of the twinbill, but Adams felt they were a little flat in a 7-0 opening-game win. In the second contest, Fort Dodge pounded out 15 hits in an 11-1, five-inning win over the Roughriders (2-11).

“We were lacking energy early on,” Adams said. “In the second game, I felt we were much more focused. Kids came off the bench and came up with big plays.”

Junior Chloe Wertz and freshman Reese Pederson made the most of their chances in the nightcap. Wertz was a perfect 3-for-3 at the dish with a double and an RBI. She also had an outfield assist, throwing a runner out at first base after rounding the bag to far.

“Chloe came out with fire in her eyes,” Adams said. “Chloe needed it, and we need it from her.”

Pederson came in as a pinch-hitter in the fourth inning and drilled a rope to the outfield, plating two runs and later scoring on the play.

In the first contest, Pederson recorded another hit and scored all the way from first on a play.

Senior Loghen Schnetzer kept her hot bat alive in the nightcap, going 2-for-3 with a double and driving in a run. Jalen Adams, Tory Bennett, Tristin Doster and Haley Wills had two hits each in the contest. Bennett had three RBI.

Fort Dodge’s top four hitters were 8-for-11 and scored eight of the 11 runs in the game. Haley Wills and Wertz — batting out of the seven and eight holes, respectively — were a combined 5-for-6.

Wills (6-2) picked up the victory in game two, allowing only four hits, one earned run. She struck out three and walked only one.

In the opening contest, Schnetzer added to her FDSH-record home run total with two more longballs. In the first inning, Schnetzer hit a two-run moon shot that cleared both fences. She then came up in the second inning and socked a solo shot to dead center.

Schnetzer has eight homers on the year, and has driven in 34.

“Loghen just hits the ball hard almost every time up,” Adams said. “She hits line drives and has such a fluid swing.”

Adams (10-1) reached double-digit victories with a three-hit performance. She struck out 13 and walked only two.

Roosevelt’s first hit came with two outs in the first inning, then Adams set down the next 15 Roughriders she faced. She struck out five in a row, setting the side down in order in the second frame.

Adams had at least two strikeouts in five different innings.

“Jalen was a little flat, but she was able to shut them down,” Adams said. “We scored early, but didn’t have a lot of energy.

“Jalen fought through it and kept them off the bases.”

Adams was also 2-for-3 at the plate with a double and an RBI. The top three hitters in the Dodger lineup were 6-for-9 in the contest.

Doster and Malia Lowrey had two hits each for Fort Dodge.

The Dodgers are back in action on Tuesday in a much anticipated contest against top-ranked Carlisle (Class 4A) on the road. First pitch is slated for 7 p.m. in Carlisle.