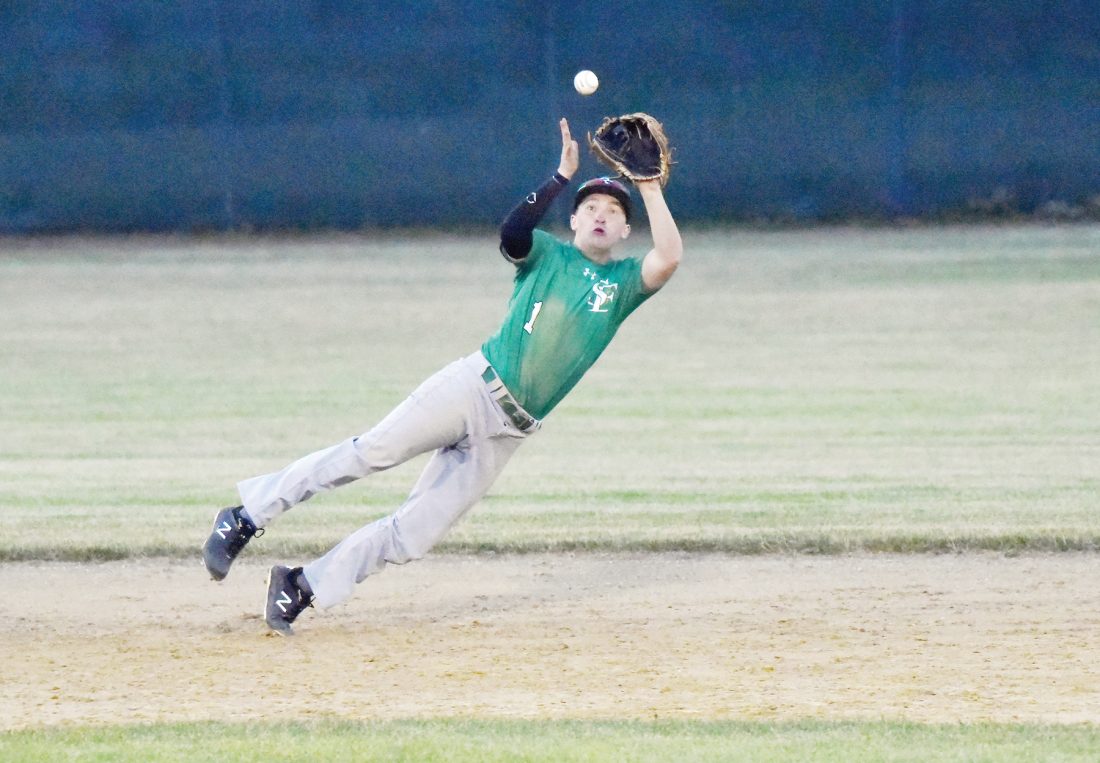 All the St. Edmond baseball team needed was a little spark to snap out of a mini two-game slump.

Noah Carlson and Grant Heldorfer provided those moments on Thursday night as the Gaels (4-2 overall, 1-1 North Central Conference) earned a 4-2 win over Clarion-Goldfield/Dows (0-5, 0-2) at Rogers Park.

Both Carlson, a shortstop, and Heldorfer, a right fielder, flashed the leather in the field, providing run-saving plays late in a tight contest.

With the Gaels leading 2-1 in the top of the fifth inning, C-G/D had runners on first and second with one out. Leadoff hitter Tyler Stein ripped a line drive down the middle.

Carlson dove behind second base to make the catch, and flipped to Drew Szalat at second base for the double play.

“That was the play of the game,” said SEHS head coach Mike Szalat. “It save some runs and kept us ahead.”

Heldorfer’s clutch effort came in the top of the sixth with the Gaels leading, 4-2. The Cowboys had runners on first and third with one out.

With one out and runners on first and third, Cael Chase flew out to Heldorfer. Reed Abbas attempted to tag on the play, but Heldorfer gunned the ball to home. Catcher John Nemmers caught the ball and made the tag to end the threat.

“That was our second outfield assist this year,” Szalat said. “I love our outfielders. They can run things down and have strong arms. Grant just threw over 100 pitches on Tuesday night and still had a strong throw.

“John is only a freshman behind the plate, but he doesn’t play like it. He is maturing quickly.”

Peyton Scott (2-0) had his second complete game of the season, allowing only four hits. Scott struck out eight and walked only two.

In two contests, Scott has racked up 25 strikeouts.

The Gaels took a little pressure off of Scott early, plating two runs in the first. Jed Tracy scored on a Scott groundout, and Noah Carlson touched home on a passed ball.

“It’s nice to get back on the winning track.”

St. Edmond’s only other runs came in the fifth. Tracy plated Devon Wirtz with a ground out, and Drew Szalat scored on a fielder’s choice for Scott’s second RBI of the evening.

Wirtz, Nemmers and Szalat had the other hits for the Gaels.

“We moved Jed to leadoff because he is good at setting the table, and Noah is your prototypical (No. 2) hitter because he can bunt and do whatever you need him to,” Szalat said. “We only had four hits, but we got them throughout the lineup.”

Mateo Martinez had the big play for the Cowboys. Martinez stole second, then ran to third after a groundout and scored on a wild throw.

St. Edmond is back in action on Friday against Hampton-Dumont/CAL at Rogers Park. There will be no junior varsity action. Varsity first pitch is scheduled for 6:30 p.m. on Senior Night.

Tracy and Carlson are the only two seniors for the Gaels.