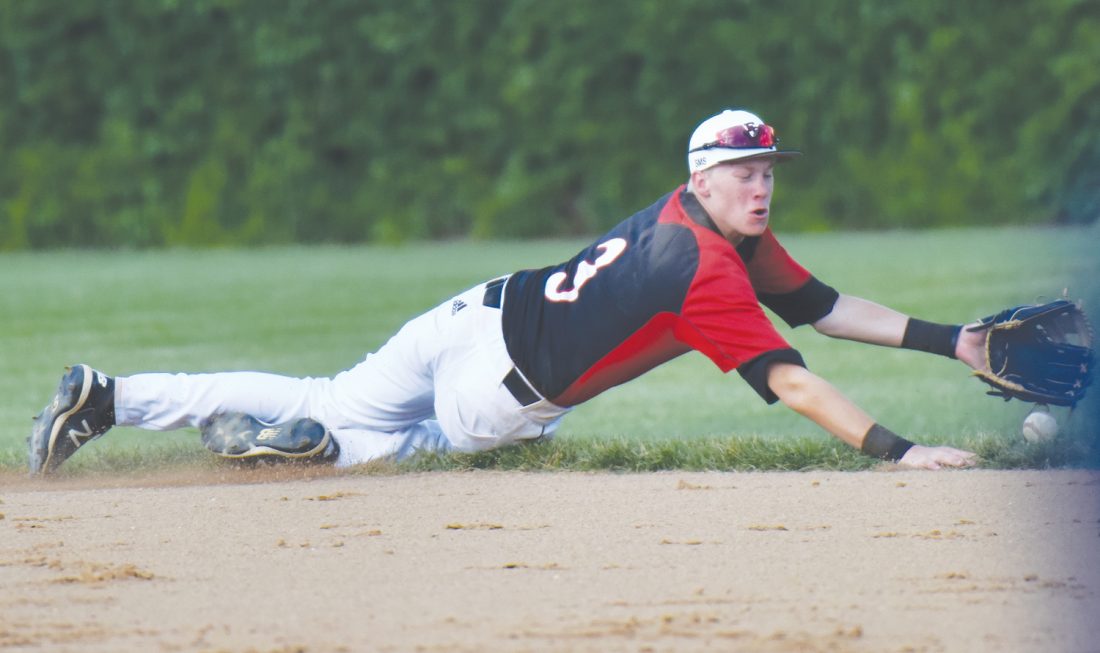 —Messenger photo by Britt Kudla Fort Dodge’s Easton Cone makes a diving stop at second base for the Dodgers against Marshalltown on Wednesday at Ed McNeil Field. For more photos, visit CU at messengernews.net

It took a while, but once the Fort Dodge baseball team got going, there was no stopping the Dodgers against Marshalltown at McNeil Field.

Catapulted by the energy from Easton Cone’s first career home run — a grand slam that gave FDSH some breathing room in the bottom of the sixth inning — the Dodgers pulled away for an 8-2 victory over the Bobcats in the opener on Wednesday.

It was all Fort Dodge in the nightcap, as head coach Blake Utley’s squad capped a sweep with a 13-3, five-inning triumph.

“Having not played since Friday (an emotional 11-10 win at No. 1 Urbandale), we weren’t really sure where we’d be physically or mentally at the start (of yesterday’s twinbill),” Utley said. “I think we were trying to do too much early on. It took some time to get settled in. Marshalltown is in a period of transition with a new coach and they’ve struggled early on. We got ahead of ourselves and were a little shaky defensively through (the first five innings).

“After that, our guys played lights out.”

The Dodgers (3-3 overall) found themselves in a 2-2 ballgame when the floodgates opened. The first three hitters reached base in the bottom of the sixth, and Nick Bice was hit by a pitch to plate the go-ahead run and set the stage for Cone.

The senior infielder hit a line drive that just cleared the wall in left field, suddenly putting FDSH up 7-2.

“What an awesome moment for Easton. He’ll always remember that,” Utley said. “It’s just so great to see him come up big in a clutch moment, because he put so much time into his craft in the offseason. He never took a day off.

“If you’d told me two years ago he was going to hit a grand slam against Marshalltown at the varsity level, I’m not sure I would’ve believed you. But Easton’s story is a great one to show to our future players: if you work hard, pay your dues and show patience, you can become a significant contributor. I love seeing it work out for a young man like that.”

Junior right-hander Dylan Zimmermann did the rest on the mound, closing his complete game with a career-high 10 strikeouts. Zimmermann didn’t walk a batter.

“Dylan was outstanding,” Utley said. “Very efficient. We had him at 82 pitches, and actually, we weren’t very sharp behind him defensively. He would’ve been in and out of more situations quicker if we’d backed him up.

“He was changing speeds, getting ahead in the count and controlling the pace. He’s pitching and performing like a senior.”

The nightcap was a rout. Fort Dodge plated five runs in the first inning, then finished the 0-9 Bobcats off with four runs in both the fourth and fifth frames.

Senior Brycen Bell was 2-for-3 with three runs scored and three RBI. Senior Mason Bockoven drove in three and registered a triple. Zimmermann scored twice and tallied a pair of RBI.

Junior Sawyer Springer was 2-for-2 with two runs and an RBI, and senior Nick Bice knocked in two.

Sophomore Carson Peterson was one out away from a complete game on the hill.

“It was a really good sign that we kept that momentum going (from game one),” Utley said. “When you put the ball in play, good things happen. And we did that (during the second contest).

“Carson did a nice job. As just a sophomore, he’s going to keep growing and getting better.”

Fort Dodge is back in action on Friday at Des Moines East. First pitch in the varsity twinbill will be at 3:30 p.m.