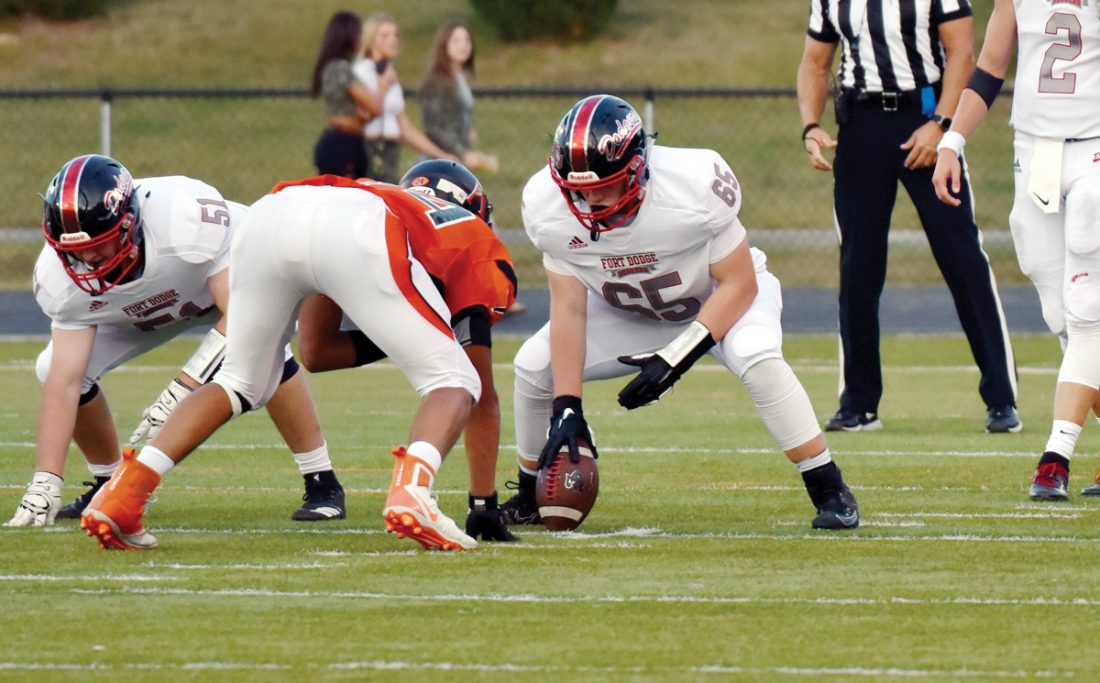 Sawyer Springer and his family needed a day like this.

Over 150 vehicles lined the street in front of the Springers’ Fort Dodge residence on Sunday. The community wanted to show its support for Sawyer’s father, Steve, a 1979 St. Edmond graduate who is currently fighting esophageal cancer.

“I was sitting in the yard behind my dad with my cousins. And it meant a lot, to say the least,” said Sawyer, who was finishing up his junior year at Fort Dodge Senior High when the global pandemic hit in March. “He knows how many people care for him and support him in this town, but this was really the first time he got to see that in person — not just through words. I know it meant a lot to my family, too. There was family that came from Des Moines just to see my dad and the parade.

“My cheeks were starting to hurt because I couldn’t stop smiling.”

A four-sport athlete at FDSH, Sawyer Springer has been a two-year starter on the Dodgers’ offensive line, the 220-pounder in Fort Dodge’s third-place state wrestling lineup, and a varsity baseball and track participant.

Springer’s life was turned upside down two months ago, when his dad first learned of the illness. The youngest of Steve and Juli’s three sons has done his best to navigate a rollercoaster of emotions, with school, sports, activities and his home life all taking a sharp turn at once.

“It’s been very hard to process,” Sawyer admitted. “Sometimes I stop what I’m doing and just think, ‘is this really happening?’ That sounds like something out of a movie, but it’s true.

“I think the hardest part has been seeing him physically change. I know he’s the same guy deep down, but the hardest obstacle to get over is how hard it’s affecting him (physically). Yet he stays so strong. And I think the other toughest thing is how hard all of this has been on my mom. But, I know they both are trying their hardest to stay strong, so I have to do the same. They’re the best parents I could ask for.”

Springer has leaned heavily on family and friends to help him navigate through uncharted waters.

“I have to try and look on the bright side of things,” said Springer, who is also Dodger Senate president, all-state in choir, and a state speech qualifier. “I’m closer to my brothers than I think I’ve ever been before. Almost every day, everyone in our family is home (older brothers Shea and Sean live on their own), so that’s helped keep us together.

“I’ve also been using all of this anger and sadness as motivation. (Former Dodger standouts) Drake Miller and Logan Finowski have both come back from Grand View, and they’ve been my closest friends during all of this. We’ve been working out 5-6 days a week and I think that’s been a good way to get my mind off of things. I’m glad to call them my friends.”

The uncertainty surrounding both the upcoming baseball and football campaigns due to COVID-19 is difficult for the student-athletes, but according to Springer, patience is a must.

“I know a lot of people in the baseball and football programs are eager to get back to playing, but I think we all understand the circumstances,” said Springer, who has been active in the school musical, fall play, water polo club, storytellers club, National Honor Society, and the Little Dodger school newspaper as well. “I’d like to think most of us are buying in and preparing on our own for the upcoming seasons. Come game time, I think it’ll really show who put in the work during this quarantine.”

Due to both the adverse circumstances and the way the community continues to rally around his family, Springer’s passion and loyalty to the Fort Dodge community has never been stronger.

“Growing up I always wanted to be a Dodger,” Springer said. “I looked up to the athletes. Now that I’m finally here, and I’m about to be a senior, I can’t help but notice how fast it’s gone. Whenever someone asks me what I want to do when I’m older, I always tell them I don’t know yet, but I want to live in Fort Dodge and keep being a part of this community.”

People I would like to have dinner with: My Grandpa Yoder, my Grandpa Springer, Kyle Long.

It would surprise people that I: That I love to sing.

Everyday role model: My mom and my dad.

I can’t go a day without: milk.

Superstition: I listen to the same songs right before a game.

What are you listening to right now? Hozier.