Kings of the net 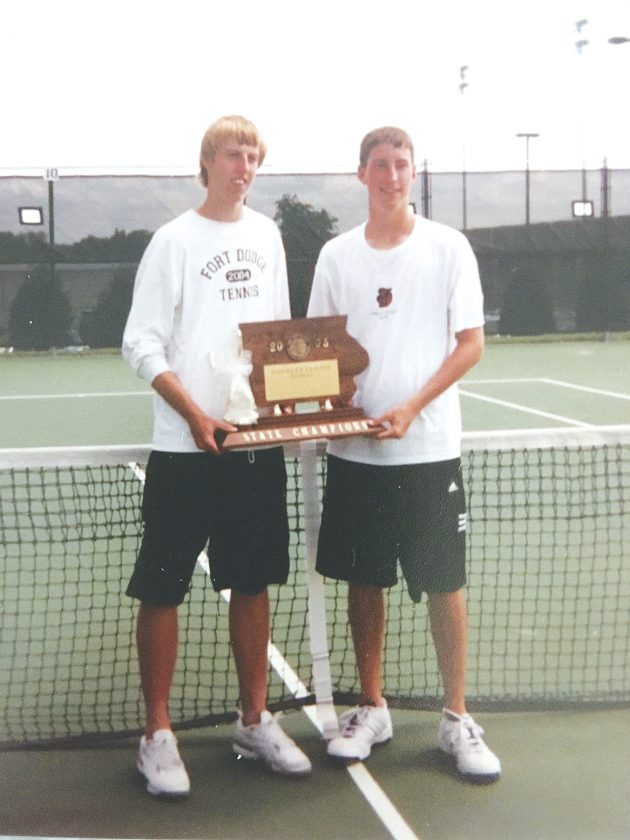 When David Knight was in high school, he spent every waking moment perfecting his game on the tennis court.

That effort turned him into a state champion.

The 2010 Fort Dodge Senior High graduate was proud to bring home a title for the Dodgers, but it wasn’t the gold medal that Knight cherishes the most.

“One of my favorite memories growing up in Fort Dodge is spending every summer day on the court with my dad until the setting sun forced us to quit,” Knight said. “I was greatly impacted by my teammates, coaches and the many adult players who took the time to hit with me as a teenager.

“The wins and losses matter far less to me than the life lessons I learned, the relationships that were formed, and the many great experiences I have to look back on because of tennis.” 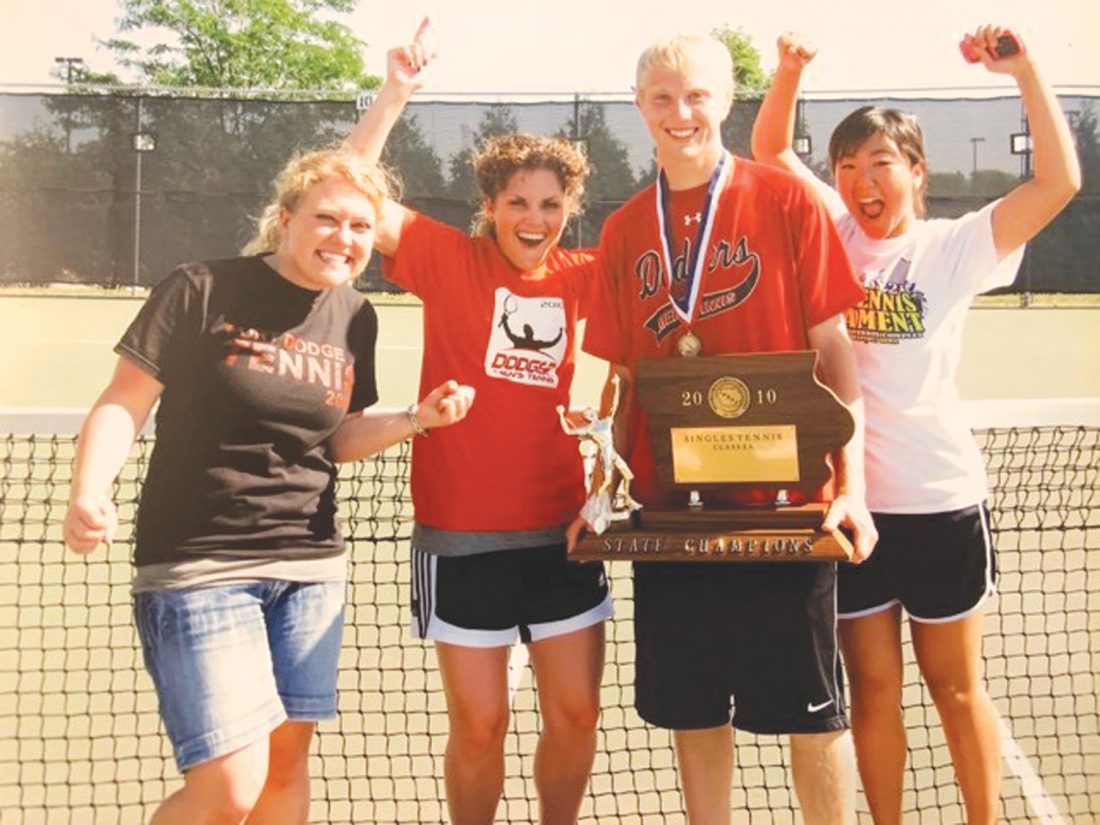 Knight is the only individual champion in school history, but two other boys tandems brought home titles, as well as two co-ed teams.

Mitch Eslick and Luke Boyd earned the first tennis title in 2005. Brian Murman teammed with Jonny Bowser to win in 2015, and Bowser paired with Murman’s younger sister, Beth Murman, to win crowns in 2016 and 2017.

Heading into his senior season, Knight knew he had a chance to be the top player in 2A, but he also had to go through a worthy field.

“I grew up playing tournaments with all of those guys (at state),” Knight said. “So I had a good idea of what to expect. I had a winning record against all of them, but the two I would face in the semis and the finals — they had beaten me before. I knew it was going to come down to who was playing their best tennis on (that) Saturday. I knew I had to be focused and at the top of my game to win.

“There really aren’t words to describe it. I started playing tournaments when I was 11, and winning the state championship was my ultimate goal. Watching Mitch Eslick and Lucas Boyd win their state doubles championship when I was in junior high made me that much more determined to win my own. When I finally did — it felt incredible to see all those years of hard work pay off.” 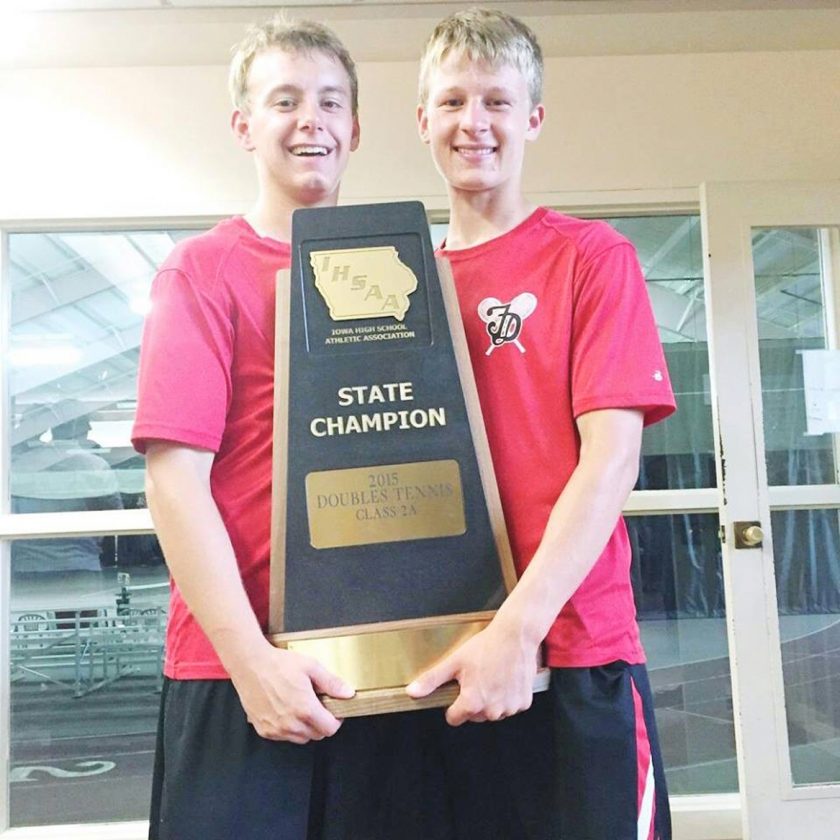 Knight went on to play tennis at Northwestern College in St. Paul, Minn. for three years, and graduated in 2013 with a biology degree before starting dental school at the University of Iowa.

Knight and his wife, Megan, have a two-year old daughter and a newborn. He owns a pediatric dental practice in Woodbury, Minn.

Brian Murman vividly remembers the day he and Jonny Bowser were crowned state champions in 2015.

“I still have the video of the (final two points). Jonny finished the second-to-last with a overhead that bounced so high. The next point I was serving a second serve. The whole place went quiet. Then McCann missed the return in the net and it was over,” Murman said. “The Dodger crowd, which was big and loud, erupted.

“It continues to be one of the greatest feelings in my life. A large icon in Dodger tennis, Don Larson, was there to witness the match. Aaron Chalstrom, another Fort Dodge icon, was standing next to (coach) Jared (Feddersen) during the last point. We were all crying very happy tears for all the hard work we’d put in over the years.”

Being a state champion was a goal that Murman had always dreamed about and positioned himself to be able to have the chance. Murman started the path to stardom as an underclassman, when he qualified with Andrew Stover. As a junior he competed in singles and finished sixth, setting up for a banner senior campaign in 2015.

“After my final football season, I was tunnel vision on tennis. Like my previous seasons, I’d play all the time and with several different people: Caleb Hendrickson, Bowser, Jaci Cochrane and Vicky Flores when they were home. My dad, Manny Flores, Ryan Flaherty, Stu Cochrane, Eric Bligard, and Jerry Jordison,” Murman said. “I was playing five to six days a week. Sometimes twice or even three times a day. There were so many talented 2A players in the field. Caleb, Jonny, and I were all looking to leave a mark. The three of us grew up playing so many times with and against each other.

“I used the former Dodger tennis greats before me and my previous experiences at state as my motivation. I took lessons from and looked up to the ones that had left their legacies. Jared Feddersen, Nick Cochrane, Luke Boyd, Mitch Eslick, David Knight, all the Bowser boys, Hilary Rogers (Cochrane), Molly Eslick, Karen Ciechowski (Mortensen) were and are still huge figures in my life. I’d go to a lot of their meets and watch and learn. I had a huge fire burning within to want to be one of those greats. And I knew going into my junior and senior seasons of tennis that I would have to work harder than the others in the state. They were single-sport athletes who could play all year round, and I enjoyed too many other things to just focus on one thing. I wanted to enjoy everything that high school and Fort Dodge had to offer.”

When Bowser won in 2015 with Murman, it was the start of three straight titles for the 2017 graduate.

“I remember going into the season that Brian and I had a pretty good shot at winning the doubles title,” Bowser said. “At state, the finals were by far the most difficult match. In the first set of the finals, the nerves were pretty high. But after that, we hit our stride and pulled away.

“After winning, it was awesome to see the time we put into tennis over the years, come to fruition at the time.”

Murman recalls the effort it took to bring home the title for Fort Dodge.

“We were dialed-in the whole time. Our final match was played indoors at Coe instead of at Vets. I remember telling my dad that I didn’t care where we played,” Murman said. “Our toughest match was naturally the finals, and even after that first set, we knew we had it in the bag. Coach Feddersen said after our first set loss in the final that we hadn’t seen anyone with that big of groundstrokes all year. We were always the dictators in points, not being forced to hit tough shots. Once we figured it out, there was no stopping our drive and passion for the game.”

Eslick, a 2006 FDSH graduate, joined his best friend starting with their freshman campaign in 2003. Each year, they progressed on the court.

As freshmen, they placed sixth at state.

“Tennis, much like wrestling, has a completely separate team tournament that only four teams qualify for. My sophomore year was the first of three straight years we made it there,” Eslick said. “Even though tennis is such an individual sport, our senior group was very team oriented so we were proud of that.”

Once their junior year rolled around, Eslick and Boyd had proven to be one of the best doubles squads in the state.

“My junior year (2005), winning the doubles title was incredible, especially doing it with Luke, who was one of my best friends growing up — it was pretty special,” Eslick said. “All the sacrifices all of the parents made taking us to all kinds of tournaments in the summer that we played together really paid off.”

After qualifying for state two years in a row as a team, Eslick knew the Dodgers had something special set up for their final run at the net.

“Our senior year in 2006, we were really focused on winning the team championship,” Eslick said. “We had made it two years in a row prior, but lost in the semis and we really thought we had a legit chance. We did finally get over the hump and beat Des Moines Roosevelt in the semis. Unfortunately we ran into a really tough Iowa City West team and came up just short, getting second (place).

“Overall, the support and really the family of the Fort Dodge tennis community was really special and something I miss. The success we had was in large part due to all of them.”

Eslick continued his athletic career at Wartburg College, were he played basketball and tennis for four years. He is currently teaching K-6 physical education, and has been the head boys basketball coach at Sigourney for the past nine seasons.

Eslick and his wife Carolyn live in Sigourney with their six-month old daughter, Vivian.